Four for the Price of One

Flying; or, The Great Roundabout, Part One

Believe it or not, at about 7:10 a.m. the sun was shining through the trees right into my eyes as I lay in bed at the Springfield Hotel. Yep, that's right--actual sunlight in London, England. It was like a pleasant spring day in Texas, coolish, partly to mostly sunny, not raining.

I left the Springfield Hotel about 9:45 and headed for the bus to Victoria Station. Did it rain on the way to Victoria Station? Well, of course, it did. At Victoria, I caught the train to Gatwick Airport. Flying where? You guessed it--DFW Airport. Yep, I got so worn out traveling I figured I'd better get back to the U.S. and rest a while.

Once I got checked in at the airport, I had a good bit of time to waste before getting on the plane. I roamed around looking for food I could probably eat (I ended up buying a croissant); I spent a minute or two in HMV (music) and WHSmith (books); I walked forever down long empty corridors to a gate with a Starbuck's, thinking they might have TMobile Wifi as well, allowing me to post July 16th's post and do some email. They didn't, but I got a cup of tea and a chocolate chip shortbread cookie. Then I sat and read a while; drank tea; nibbled on the shortbread. Then I finally went toward the gate for my flight, and there was a TMobile Wifi Hotspot, right outside my gate, after I'd already blown most of my "spare" time. So I connected, posted July 16th, and answered a good bit, but not all, of my email.

I boarded the 777 in "group 6", about 1:45 or so. It was a little after 3 before we actually took off. The plane was full, or very nearly so. 10-hour nonstop and nowhere to spread out and relax.

I read; I snoozed; I listened to Nico. I even, toward the end of the flight, talked to the woman next to me, a doctor. It wasn't as hard as I thought it would be to stay almost stationary for 10 hours, though I fidgeted around, stretched my legs out under the seat in front of me, arched my back, and so forth. It wasn't exactly delightful either, to be sure.

One of the books I started reading was Parménides by César Aira of Argentina. I read about half of it on the flight--it's fairly short. It's based on the idea that the "philosopher" Parmenides of ancient Greece wasn't actually a philosopher at all and that he hired a poet to help him write a book about what life had taught him. The poet wrote a quasi-philosophical poem, much of it as a joke, which has survived into the present and is taken seriously. Kind of a fun idea, I think.

I also read a couple of Yeats's short plays. The Shadowy Waters is beautiful (in language), but quite silly in concept; sort of hyper-Romantic. The Green Helmet seems to be based out of the legend (or perhaps an Irish version of the legend) of Sir Gawain and the Green Knight and is labeled "An Heroic Farce." Interesting but hardly as good as Yeats's poetry.

At one point on the flight I'm pretty sure I was seeing Greenland out the window--and it looked very white and icy. I hope so. That was just about all the land I saw (except for a cut of England as we ascended) because the wing was mostly in the way.

Long trip; but smooth and arriving on time, about 6:15 p.m. (midnight to my Anglicized body). The bus trip was smooth; the train trip was smooth; the flight was smooth. Getting home from DFW Airport was not smooth. From the time I walked out the door to "Ground Transportation" and told Super Shuttle I'd like a ride home to the time Super Shuttle actually got me home was about 95 minutes, and it cost me $47. I was pretty hacked. Three other customers who got picked up after I did got delivered before I did because I was farthest. I was pretty hacked. I don't recommend Super Shuttle if you're going to or from DFW from one of the outlying suburbs like Duncanville. They're cheap and quick if you're going to a downtown hotel; if you're not, you pay through the nose for terrible service. Lesson learned.

Boy, was I tired. My mom and my sister Teresa greeted me when I came in the door, and we visited for a couple of hours before I figured I needed to crash. It was fun to see them again, and it'll be fun to see you too, when I do. Good night.

Well, I got up about 7 a.m., even though yesterday was a 30-hour day, and had some trouble staying asleep past 5 a.m. But remember that for my London-adjusted body, 7 a.m. was 1 p.m. So I may zonk entirely tonight. We'll see.

After breakfast and a short walk, some chin-ups and pushups, and a shower, my sister Teresa and I went to Target and did grocery shopping. I like grocery shopping at SuperTarget! I bought pound cake. Wouldn't you think the English would have pound cake everywhere? They don't.

While we shopped, I kept telling Teresa, "When we get back to the house, you know what I'm going to do? I'm going to have lunch." I'd already had a good-sized bowl of oatmeal and two big pieces of toast for breakfast, and I was drinking tea and eating a Starbuck's croissant while we shopped. My metabolism hasn't slowed down yet.

After lunch I spent a bunch of time on the phone with credit card companies, letting them know I was back in the U.S., or activating new cards sent while I was gone, or tracking down what, if anything, might have been wrong with one card. Mostly time spent on hold. I also spent a bit of time with what used to be the teachers' credit union getting pre-approved for an auto loan. I may be car shopping tomorrow.

I've worked on some email, worked on yesterday's and today's Travel Log posts, and mowed my mom's yard. Pretty exciting, no?

What were the highlights of the Great European Adventure?

1. 5 and a half days at open sea between Ft Lauderdale and the Azores. Talk about relaxation. I definitely recommend a transatlantic crossing. (Or go from L.A. to Hawai'i if you prefer.)

3. The British Museum! Gudea; the Ram in the Thicket; the gargantuan heads of Amenhotep III.

1. That I have a lower tolerance for traveling on my own and facing the strange every single day than I thought.

2. That my tolerance for rain and cloud cover is higher than I would have thought, but that I do not even want to think about being anywhere in the British Isles again any earlier than August 1 or any later than September 15.

3. That it's fun having company! I was probably way too tired and grumpy by the time Susan arrived, but I think we managed to have fun and see some cool sights anyway.

4. That I miss friends and family when I can't see them easily. (But I already knew that.)

So what do you say, folks? Shouldn't we plan a group trip for next summer? Rent a big house somewhere in Spain or Italy or France so we can all have our own space, do what we want during the day, but meet together over supper and share our adventures?

Today's main activity was spending money, in particular, buying a car. I went to John Eagle Honda, one of the dealers recommended by the credit union, and met with a salesman. They had only two 2008 Honda Element LXs on the lot, one black, one silver, and I put the money down to buy the silver one. Subsequent activity included getting car insurance again, which I have not had since the beginning of May (since I have not had a car), and getting the loan information to the credit union about how much money they have to finance for me for the Element.

The folks at my insurance agency told me I was a guinea pig--they had not previously dealt with my exact situation, someone who canceled insurance because it was unnecessary and now needed reinstating at the old preferred rates. It took a while to get the computer system squared away to adding me back in, rather than creating me as a new customer with higher rates, and to get the computer to recognize a 2008, rather than 2007, automobile. After we got this taken care of, I headed for the credit union to show them my proof of insurance for the vehicle.

After all of this running around, my sister and I went out to Cedar Hill State Park at Joe Pool Lake to check out RV slots for our niece, who is coming with her kids and my California sister in a couple of weeks for a visit.

Then the evening's soiree was the Vacation Bible School talent show, in which my nephew and two of my great-nieces performed, followed by ice cream at Braum's.

Now it's time to be tired. 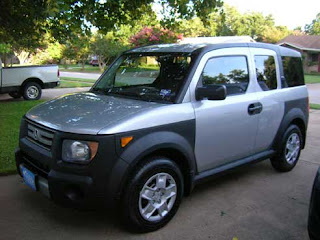 There it is--kind of cute, isn't it? My sister Teresa took me back to the dealer today to pick up the Element. This is the first time since 1990 that my vehicle hasn't been a pickup! The salesman Johnny Kebi greeted us at the door, took a photo of my proof of insurance, then took us to the Element, waiting in a bay and ready to go. My first passenger was my nephew Maddison. My first destination was Dallas's West Village where there is a T-Mobile store. My sister followed in her CR-V.

We spent some time at the store, getting me set up with a phone and wifi, and (as with my insurance yesterday) T-Mobile opted not to treat me as a new customer, but rather as a returning or continuing customer. This seemed to require the T-Mobile lady to run through some rigamarole before getting my phone and number set up. While we were there, my sister also got some information on switching phone service from Florida and so forth, and they transfered my phone numbers from my old phone to the new phone as well.

Back at the house, we had lunch and rested a bit. Then we watched it rain. Then we headed back out to Cedar Hill State Park to do some more investigating (such as, Are the showers/baths decently clean? Is the marina nice?) for my niece. Unfortunately, since Friday is considered weekend, the rangers wouldn't let us in for 30 free minutes to investigate, so we told them we would return on Monday. And since it had recently rained, my delightfully new Element now has already lost its newly washed freshness and looks mucky like everyone else's vehicle. Sigh.

Tomorrow morning I hope to get to Starbuck's to check out my new wifi agreement and make sure it works! If so, then I will be able to post this "four-for-the-price-of-one" entry--with only one photo.
Posted by Cooper Renner at 9:26 AM