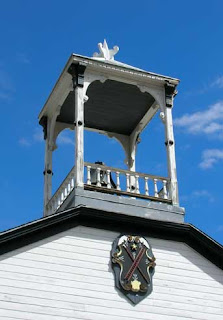 Today my aunt, my niece and I had "grown-ups' day," as both kids were in school. We went west of Denver up into the mountains to a small place called Georgetown, about 8900 feet above sea level. There is one main street, part of the old town center, I suppose, which has boutique-style shops and restaurants. Lots of jewelry, Colorado-related clothes and memorabilia, and even a sort of gourmet grocery with imported foods as well as locally produced honeys, jellies and so forth. One of the stores specialized in sweets-making: toffee, fudge, shortbread (made, they claimed, by a real Scot!), and even taffy. The city museum is housed in what used to be the "Hotel de Paris".

My aunt splurged on ear rings. I think she bought 4 pairs. She also found a nice pocket-knife for her grandson. My niece bought a cowboy-ish hat. I considered a copper bracelet, wondering if it might help my arthritis, but I ended up buying nothing that wasn't edible or drinkable.

That photo above is, I believe, the town hall and police station. I wasn't really paying all that much attention when I snapped the photo.

We had lunch at a place called The Happy Cooker. It's in an old house and has an extensive menu. My niece had quiche and a salad; my aunt had grilled cheese-and-bacon sandwich with home fries; and I had a typical sack lunch of tuna, applesauce, V8 and chips.

This shot catches my niece and aunt in an unguarded moment. You can get an idea of what the main street looks like and how steep the mountains are in which Georgetown situated. You might, if you look really closely, be able to spot where I-70 cuts across the mountainside. 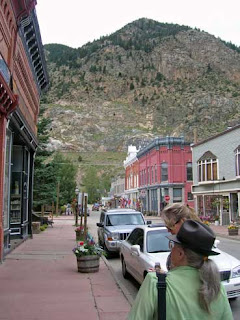 This is the side of the "trading post", featuring a lot of well-weathered wood. There's no particular reason to have taken its photo, except that the wood is kind of interesting. 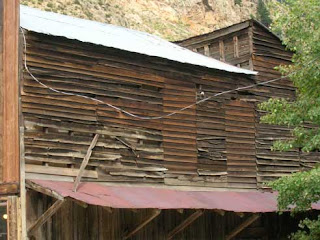 Posted by Cooper Renner at 3:13 PM