This morning I made a visit to my great-niece's kindergarten class to do a little storytelling. I think it may have been my first full-scale performance since last December when I retired. In addition to pretending to fall asleep in the chair (awakening as they laughed at me), I told them the story of Little Babaji (aka Little Black Sambo) and sang "She'll Be Comin' Around the Mountain" with them. My aunt took photos while I performed. In this photo I'm think I may still be doing shtick (asking who's married, etc.) 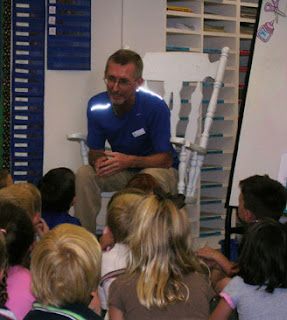 In this photo, I suspect I must be growling like one of the tigers. 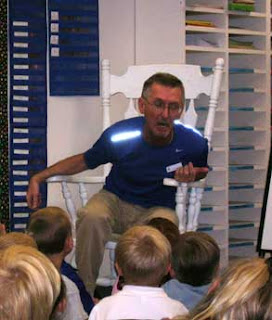 My great-niece, now out of school for the day, has already asked for the story again. Yikes.
Posted by Cooper Renner at 3:47 PM 4 comments: 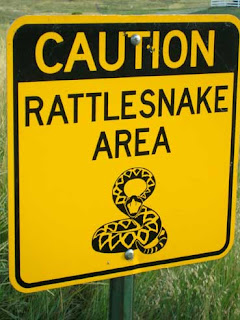 That sign greets the hiker or bicyclist heading up the loop trail on the county land behind my niece's neighborhood. I haven't seen a rattlesnake yet, which is a good thing, I reckon, but I am on the lookout. The county land, undeveloped except for a few trails, is hilly, covered with wild grasses, flowers and various kinds of scrub. There's an insect doing his insecting here: 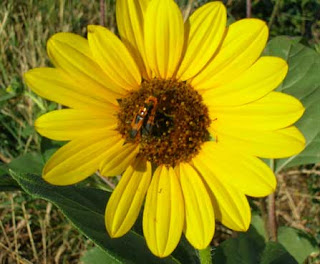 The wind was blowing, making the flowers "toss in sprightly dance", so I snapped three or four photos in hopes of getting one more or less complete flower. It didn't turn out too bad, after a little "enhancement" on the computer.

Looking north from near the top of one of the hills, one can see what look like two downtown areas. Lone Tree is a fair distance south of Denver, and one of the high-rise areas is pretty close. My niece said she's pretty sure that's what's called DTC: Denver Tech Area, where a lot of businesses considered technologically oriented are clustered. If you look really carefully, you might be able to make this area out on the right horizon. "Real" Denver is also on the horizon, way off, and toward the left edge of the photo.

This photo, which I also shot looking north, gives an idea how many houses there are in the area, but also what a good job they've done bringing in trees among all the development.

Lone Tree houses mostly seem to be large. In my niece's area they have two stories, plus basements, adding up to a lot of square footage inside. In this shot, you might be able to spot my Element parked in my niece's driveway. The open space in the foreground is part of the community space in the neighborhood, which includes parks and wide sidewalks for exercise and dog-walking. 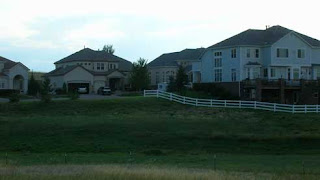 Posted by Cooper Renner at 5:59 PM No comments:

Tattered Cover, which used to be an enormous, multi-story independent bookstore in downtown Denver, is now in a suburban shopping center south of downtown. I don't know when the shrinkage occurred, but I guess it's just another sad saga in the vanishing of independent bookstores. Of course Tattered Cover hasn't gone away entirely, but its fortunes seem to be reduced.

Cloudy and cool right now in Lone Tree, with the clouds apparently coming from the south/west over the mountains. Temperature is probably about 80 degrees.
Posted by Cooper Renner at 2:55 PM No comments:

The question is: How do the people of Dumas pronounce the name of their town? If it is named after the French author, is it pronounced, more or less, doo-MAH? Or is it, as I have assumed, DOO-muss?

From Dumas one heads up Highway 87 toward Dalhart and then into New Mexico. Raton is the only sizeable stop; it's at the intersection of 87 and Interstate 25. It's got an old town center, but there doesn't seem to be a lot going on. Maybe it's more of a hopping place during the ski season. Going north on I-25 toward Denver, one gets up above 6000 feet in elevation and stays up that high most of the way. Mountains to the left (west); a little more plainsy to the east.

Here's another question: since West Texas is a major oil producing area, why does gas out here (and in New Mexico, another oil producing region) cost 45 or 50 cents more a gallon than in Dallas? Why is the gasoline price ABOVE the national average by 15 cents or more? I don't get it.
Posted by Cooper Renner at 10:09 PM No comments:

On the Road Again

Can you believe I'm spending the night tonight in Dumas, Texas? Dumas is in the Panhandle, not too far east of the northeastern New Mexico border and not too far south of the Oklahoma Panhandle (which is admittedly more pandhandle-ish than Texas's is). My aunt and I are on our way to Denver (technically to Lone Tree, south of Denver) to visit my niece and her family for 8 or 10 days. It's the first road trip for the Element, and it's doing well. Wish us luck! (And let's hope I'll have something to photograph soon--maybe even tomorrow.)
Posted by Cooper Renner at 8:29 PM No comments:

Here's yesterday's photo of my nephew standing in front of my Element and holding the sketch I did for him: 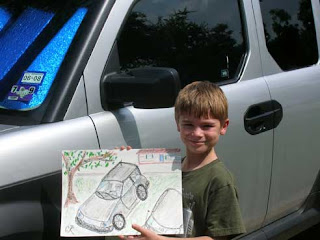 And here's the sketch itself: 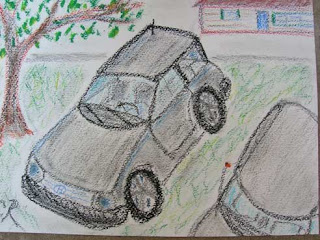 This sketch is a prime example of why I ought to be looking at what I'm drawing, rather than using my memory: don't you love the way the side of the Element sags into the drawing?!

Later I had to spend more than an hour washing the Element (using baking soda) because a tree dripped sap all over it, and it looked like a cabal of farmers had stood around it spitting chewing tobacco onto it. It looked like acidy stains. The paint doesn't seem to have been pocked or anything, but it was quite a job trying to get the brown off the vehicle. It kind of scared me--I was afraid my new vehicle was already ruined.
Posted by Cooper Renner at 9:21 AM 3 comments: