TV by the River, and Swans on the Serpentine

And we had sunshine again today, so maybe Jane sent it from the desert. London sure needed it. I believe the temperature actually hit 75 today, but the wind was up again, so sometimes it wasn't as comfortable as yesterday. Sitting on the bank of the Thames doing a drawing this afternoon, I needed the windbreaker.

My first photo today is a mother (or father?) swan and the cygnets. I think Hans Christian Andersen was wrong: just because they're not yellow doesn't mean they're ugly. 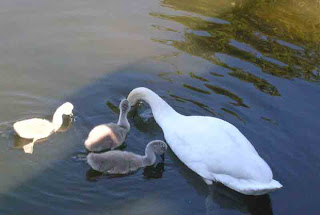 My target on my long walk this morning was the Tate Gallery of Modern Art--or the Tate Modern, as they call it--so I went through Hyde Park and out toward Buckingham Palace, and then east along The Mall to The Strand. (I'm sure you're all following this on your maps of London!) I had walked almost the whole length of The Mall (the big street that connects Buckingham Palace up to where the Horse Guards are) when I came to The Mall Galleries. They had an exhibit of artwork involving textiles. An artist named Amanda Hislop had some small landscapes done on (or with?) pieces of cloth. Quite cool. I also had morning tea in the cafe there.

Not far beyond the galleries, near the Admiralty Arch, is the column for the Duke of York. This Duke of York is "the" Duke, the one of the nursery rhyme: "The grand old Duke of York / He had ten thousand men." He was George III's second son, so he never got to be king, and a government official who was standing there told me that "they say" the reason the column is so high and the Duke's statue so far up in the sky is so people couldn't throw things at it. Apparently he was very unpopular: remember in the rhyme what he did, he "marched them up to the top of the hill / And marched them down again."

While I was there, I heard something behind me and looked, and there went a a troop of horsemen, on their way to the Changing of the Guards, I assume. A lot of them were carrying musical instruments. I got a couple of photos, but neither was terribly good, so I won't post either. (If you want to see them, email me.)

After passing through the Admiralty Arch, I moseyed down The Strand, another famous street for readers of 19th century English fiction. I picked up some lunch for a little picnic on the river bank and crossed over the Thames on the Waterloo Bridge and turned east. I had my lunch on "The Queen's Walk" not far from the National Theatre, the IBM Building and the London Television Centre. This last explains, I suppose, a little bit of serendipity I had. There was a small crowd standing on the walk above the river and some kind of food presentation going on, with cameraman, wiring, and so forth. I asked a woman in the crowd what it was, and she explained that they were doing a live outdoor segment for the show called "This Morning." The woman in the center is one of the hosts (the male host was sitting off to the side), and the guest, a chef, is to her right and facing away from the camera in this photo: they were on commercial break, I think. Apparently the chef is pretty well-known, at least over here, but I don't know who he is. 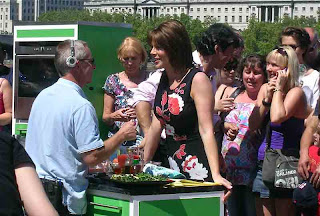 Then, down on the river bank itself, was this guy in a kilt sculpting the words "This Morning Live on the South Bank". 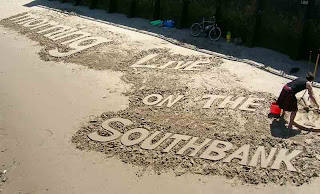 From here I made my way on to the Tate Modern. The collection there includes Picassos and Dalis, as well as less famous artists of the 20th century, and of course they do special exhibits as well. There are several going on now, some of which were free (I went into those); two others cost 10 pounds each and I skipped those. One of the paintings which must be one of the most famous is one of the Monet paintings of Waterlilies. This one is quite large: I guess it must be 4 feet high and 8 or 10 feet long. There is also a Jackson Pollock, which looks like you expect a Pollock to look like, that must be about 30 inches high and at least 5 times that long. I was especially interested in the work of a Portuguese artist named Sarmento whose paintings sometimes looked sort of like unfinished sketches, and an African artist (from the Ivory Coast) who works on small pieces of stiff paper, sort of like card stock, and uses ball point and colored pencil: small drawings with various things written around them. Some kind of dream interpretation or representation. There is also a room devoted to an American artist named Ed Ruschka whose work often makes me laugh, though I don't know for sure if that is his intent. I like it a lot. One of the paintings is basically a red background with block printing on it that says something like "You must find me insane because I'm just crazy about that little girl."

It was a warmish sunny day, remember, and most Londoners don't have yards, so there were people all over the place in the public spaces, including on the lawn between the Tate Modern and the river. Right here by the museum you can also go onto the Millennium Bridge--a footbridge over the Thames that leads more or less straight to St Paul's Cathedral. I joined the crowd crossing the river and, once I was across, took pictures of two street names that caught my eye. I didn't see David Hasselhoff anywhere around this place, though: 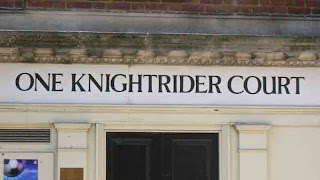 And right near it, leading up to St Paul's, is this street. I hear people sleep good here. Hehehe. 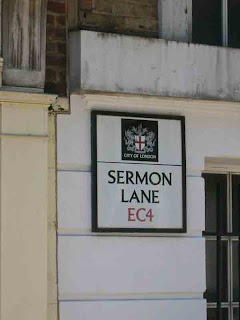 St Paul's charges 12 pounds 50 pence to go inside, and I figured I've seen a zillion churches on this trip and the last trip so--architectural marvel or no--I skipped it again. I did sit for a few minutes in one of the garderns, resting my feet, and looking at the map. And that's when I saw this pigeon. As you all know, I'm not a fan of pigeons, but this little gal or guy sort of won my heart. Look carefully at his/her right foot: 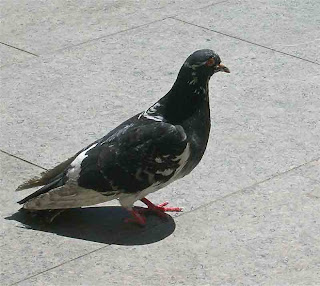 I made a side trip up Old Bailey road, not far from St Paul's, to take this photo for those of you who are fans of British mysteries. There are two buildings labeled "Central Criminal Court," and this is the old one, so I reckon it must be Old Bailey itself. 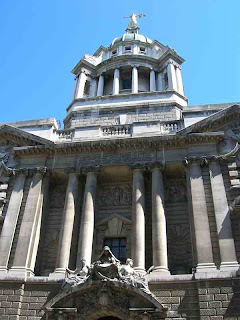 I also took a peek in another church designed, like St Paul's, by Sir Christopher Wren, yet another St Martin (not in-the-Fields, but in Ludgate). It was nice enough: just a church.

And then it was time for the long meandering walk back to the hotel: back along the river for a while, along The Strand, past Trafalgar Square, up Regent Street, west on Oxford Street, and so forth. I browsed books one last time at Waterstone's (didn't buy anything), had one last little picnic in Hyde Park, worked on a couple of sketches at the Italian Gardens, and then back to the hotel. I think I've got the suitcase pretty well packed, and the things pulled aside that I will need in the backpack for carry-on.

And then tomorrow: that long long flight.
Posted by Cooper Renner at 12:57 PM