The Highlight of the Trip 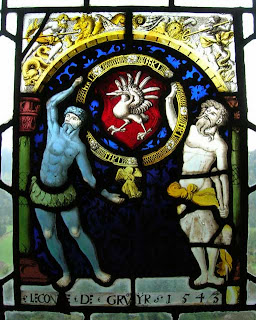 It was wet and chilly Thursday morning in Lausanne. As we rode in the bus toward our first stop of the day--a cheese factory--Cristian joked, but with (he claimed) substantial accuracy, about another bit of roadwork we were passing through. In Switzerland, he said, there is always roadwork going on, though the roads are in great shape; in Italy (his homeland, remember) the roads never get repaired, no matter how much they need it.

At the cheese factory (whose name I cannot remember, but which was in or near the town of Gruyeres), we actually saw a huge gleaming vat of yellowy liquid being churned around by a big mechanical stirrer, as well as an actual human being using what was obviously a very sharp blade cutting a large cheese into rectangular pieces. In the snack shop, Cristian passed out samples of the factory's cheese: little plastic packages with three small slices inside, a mild cheese of only a few months in age; a "medium" cheese around six months old; and a sharp "old" cheese of around ten months. I ate the mild slice and passed on the others, but the girls sampled all three.

After the cheese factory, our next stop was up the hill to the old section of Gruyeres. Here in this defensive location was the castle itself and what has survived of the old town from several centuries ago, now full of shops for the tourists. This picture looks along the main street of the old town, toward the castle: 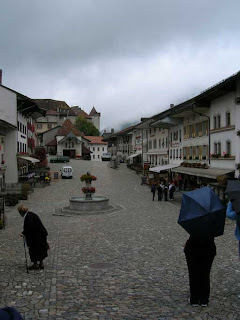 As we walked toward the castle, which most of us chose to visit, Cristian mentioned the museum of an artist here in town. At first I didn't understand who it was, but as it turned out it was H. R. Giger, best-known in the U.S. for creating the monster of Alien and for designing one of Emerson Lake & Palmer's LP jackets. I may have known at some point that Giger was Swiss, but certainly had forgotten if I did, and I certainly didn't expect to see his museum in this little "old" town. Giger's work can be very disturbing, but I was torn as to whether I should skip the castle and go to the museum. 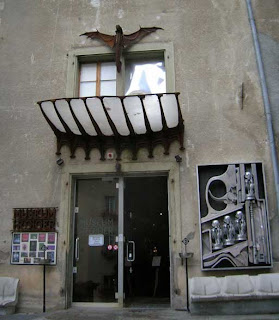 I finally decided for the castle, and--although I would have liked to have browsed the museum--I'm glad I made the choice I did: for me, the castle/chateau at Gruyeres was the highlight of the trip. It was clearly a castle--not a palace. Even though some of the rooms were "polished" and decorated for the usage of the baron (?) and his family, it was obviously intended first for defense: rough stone walls, large rough wooden beams, rampart, windows from which weapons could obviously be fired at attackers below, and so forth. I took several photos looking through the windows to the scenes outside. This one shows a small church outside the walls: 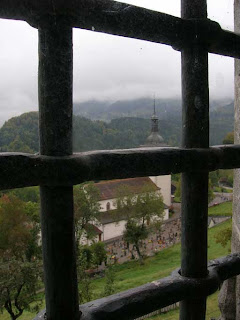 There was also a sculpture exhibit currently being housed at the chateau, and statues of people were scattered around the grounds and inside the rooms. The artist is (was?) Hanneke Beaumont, about whom I know nothing. This photo shows figures inside the courtyard of the castle: 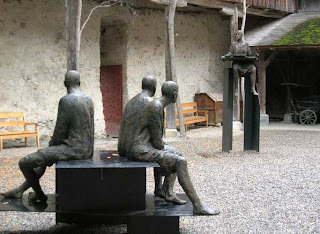 Underneath the protective overhang of the upper story on what I think of as the west side of the chateau (though there's a 75% chance I'm wrong!) there is also a long wall painting, some of which has been damaged by the years but which is generally quite bright and fresh looking: 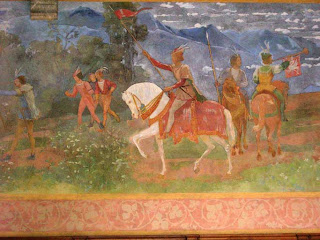 Inside one of the rooms there was another painting, done onto wood as well as I could tell, and apparently covering an older fresco underneath. One piece of the later painting was cut and lifted up, so that we could see the wall beneath, where it is easy to make out some kind of damage to the wall: chunks of plaster seem to be gone: 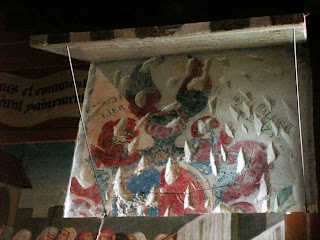 I could have stayed longer at the chateau, even though I stayed there as long as I could and didn't have a chance to dip into the Giger museum. In the parking lot as we prepared to leave, I took this photo of a Morgan automobile. 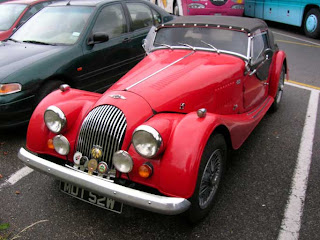 After leaving Gruyeres, we went to Bern, the capital, for lunch and time to browse. Once again, Janis, Debbie and I had our lunch at the Swiss combo restaurant/grocery and wandered the heart of the old town. It continued to be damp, cloudy and cold as we visited the cathedral, the clock tower, and a CD store. We also saw a sign identifying an apartment where Einstein lived from 1903-1905 (which means, I suppose, that his 1905 relativity paper may have been written there), and I had fun taking a photo of a business sign reading: SCHMUCK-CAFE. (My photo program is, unfortunately, refusing to export the photo for me.) (And I suppose I should mention that schmuck means jewelry.)

After Bern, we drove to Interlaken where we had a brief halt during which Jungfrau (the mountain) did not make an appearance through the clouds. Five of our compatriots disembarked here for a week's stay, and fourteen other tourists who had just spent a week in Interlaken joined us for the end of our tour. The girls and I walked the main strip but couldn't even find a little to-go bakery for a hot cup of something and a pastry!

From Interlaken we headed on to Lungern for the night. Along the way we passed the falls at which, Cristian told us, A. Conan Doyle had Sherlock Holmes die for a while before public demand made him "resurrect" and explain away the detective's death. The moving bus and my camera batteries weren't cooperating, so I never got a decent shot of the falls.

Lungern's a pretty little town, on the banks of the Obsee, where I discovered a sort of RV park in which folks had built additional rooms/cabins directly onto the sides of their RVs. There were also stand-alone cabins in the park. The hotel didn't impress me much: my room was chilly and had a mildly bad smell to it. But I got a nice photo of the town from the church grounds. You can see tombstones in the foreground of the photo: the entrance sidewalk goes up through the cemetery to the church. 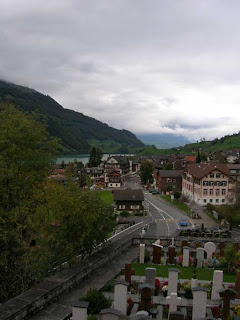 There was another optional excursion this evening which I skipped for walking around and spending time in my room reading. Tomorrow: Lucerne.
Posted by Cooper Renner at 8:21 AM