Lugano to Täsch by way of Italy

Tuesday morning we had some foot time in Lugano before leaving for our first "field trip" of the day. I walked with Janis and Debbie along the main drag by the lake, back down to the church of Santa Maria degli Angioli (St Mary of the Angels) which they had not yet seen. Quite a few of our group made the walk there before dispersing into the center of town for shopping.

The evening before I had seen a coin shop, just closing, which looked like it might be interesting: there were, for example, some ancient Roman coins on display in the window. While the girls went into another shop, I headed on down the "high street" in search of the numismatist. One coin I would have liked to see more closely was a coin of Julian "the Apostate", the 4th century emperor who wanted to restore the ancient worship of Zeus and the gods. I couldn't find the shop, but I did notice that the bookstore I'd seen on Monday also sold Wenger Swiss Army knives. I needed a pocket-knife for slicing up my apples so I browsed the display windows outside, then went in.

Besides looking at the knives, I also decided to buy a German-language book called Hermann Hesses Indienreise (something like Hermann Hesse's Trip to India) which I thought might be simple enough for me to work my way through, with a dictionary of course. While I was browsing, the girls found me, because Debbie was also interested in looking for knives for gifts. I bought a small and simple knife, with a short blade, a nail-file and a pair of tiny scissors, and Debbie bought two, I believe, a little more elaborate than what I wanted.

In the U.S. one normally sees Victorinox Swiss Army products--not just knives, but also watches and even clothing. (In fact, my "Malta pants" are Victorinox, as is my smaller pocket watch, the one which accompanied me on my journeys.) But these knives were Wenger. Wenger calls itself "the genuine Swiss Army knife" and Victorinox goes with "the original Swiss Army knife". I did a little Wikipedia reading, after returning to the U.S., and learned that the two companies made an agreement, long ago, to use these variant terminologies. According to Wikipedia, Victorinox is indeed the "original" manufacturer of the Swiss Army knife. (Before Victorinox got into the business, Swiss soldiers were carrying knives made in [gasp!] Germany.) Wenger began making similar knives just a few years later. As it turns out, the Victorinox company bought Wenger just a few years ago, but the two names and designs, as well as the two claims, are still used by the unified company. Wenger products feature a rounded square logo with the cross in the middle. Victorinox uses a shield-style logo. The Wenger knives cost a little more, though I don't know what, if anything, this means.

When we left Lugano, we went to the Alprose chocolate factory. Here we had, no joke, a sort of field trip, going through the factory to see the conveyor belts and so forth--and with signs warning that photography was not allowed. (Even so, one of our tour members, who was video-ing incessantly, was video-ing inside the factory.) After one completes the short tour of the factory, one is routed, to be sure, into the factory store, to purchase chocolate to one's heart's content. I didn't buy any, but Janis and Debbie both did, and so did, I imagine, most of our colleagues.

After leaving the factory, our next destination was Stressa, Italy, on the shores of Lake Maggiore. Here there was an optional excursion out to one of the islands (Isola Bella) in the lake to tour a palace of the Boromeo family and its gardens. Janis and Debbie toured while I wandered Stressa. I had my tuna, chips and apple at the lakeside, then went to the Irish Bar (yep, that's its name) for an after-lunch glass of wine. Afterward I strolled town some more and bought a croissant at a local bakery. When I offered the woman a 5 euro note to pay for my 1 euro purchase, she was quite upset. But I didn't have a euro in change, so she took the bill. I was more than a little piqued at such distress over giving me 4 euros in change!

I walked along the lake through a small park which also, like the park at Lugano, featured sculpture. One of the sculptures was actually a monument, expressing the sympathy of the people of Stressa with the U.S. after the attacks of September 11, 2001.

Another was this exuberant horse, behind which you can see one of the islands in the lake, though I don't know which one it is. 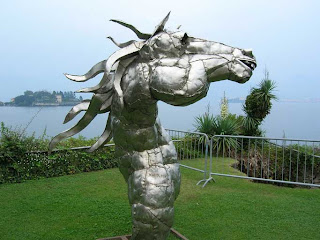 Yet another was a World War II memorial. 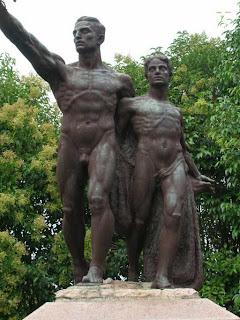 After this stroll, I had a cup of tea at a cafe across the street from the lake, then rejoined the bus and those returning for the island excursion.

Off to Täsch for a night downvalley from the Matterhorn. Our good weather had somewhat forsaken us today already, the sun leaving us for clouds, and we reached Täsch in an icky drizzle. Our hotel, the Walliserhof, was somewhat charming, though, in the manner of Hotel Bären in St Moritz. This photo was taken out my balcony, looking toward the mountains. 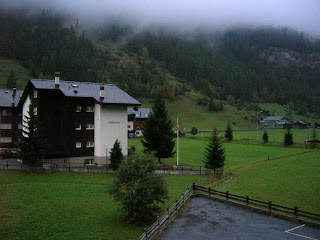 Dinner was included this evening in the package (apparently because dining options are fairly limited in Täsch), and the waitress was very solicitous of my food limitations. The cook prepared me a plate of boiled potatoes, sliced and buttered, which were quite tasty. I also had hot tea (how could I not?), though, oddly, only water was included with the meal and any other drink had to be paid for.

Our plans for the next day were aimed at one of the trip's highlights: a train ride 4000 feet higher up the mountain in order to see the Matterhorn!
Posted by Cooper Renner at 8:27 AM