Today too I spent some time doing email and Internet work, but after lunch Tsipi took me for a tour of Lake Worth and Palm Beach. First we drove south on Dixie Highway (also called Highway 1, I think) from West Palm Beach to Lake Worth. The town center of Lake Worth is several blocks of small shops, a live theater, and so forth: interesting, unusual, not chain-store-paradise. Lots of houses and apartments for rent in the vicinity. We parked near the beach and walked over, took our shoes off and strolled the beach. At one point there was either a wedding or wedding photography going on. One small portion of the beach was 'taped off' where sea turtles had laid their eggs on the 14th (just 3 days ago!) The wind was up a bit, and so were the waves. Though it was not terribly sunny at the time, the beach was fairly crowded with families, young couples and friends and -- up near the fancy resort called The Breakers -- a bunch of young guys doing acrobatics in the sand, overhead flips and so forth.

We then drove along Highway A1A to Palm Beach where we visited several beautiful spots. One was Bethesda-by-the-Sea, an Episcopal church, very English in its lineaments, though it also features Japanese gardens and a pond of large carp (whom one is not to feed.) Not too far away from B-b-t-S are the Four Gardens, with bamboo, banana trees, hibiscus and so forth, (as well as a library, closed at the time). I can't remember the name of another place we walked, facing the intercoastal waterway, where there is a huge tree with roots shaped almost like low walls, instead of the usual more rounded variety.

Later, back at the B&B, I worked more on Disbelief. It's almost always soothing to me to work on drawing: a good feeling when one is a bit disoriented from too many changes in too short a time (i.e. selling "Alhambra of the South", relocating temporarily to my mother's guest room, making visits with friends and family before heading to Malta, selling the car, flying to Florida, and so on.) Here's a photo I took while out on foot today: Yes, it says "Anointed Meals on Wheels". I "painted" out the phone number, so that's why part of the side of the vehicle is coloured funny. 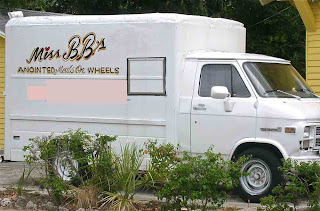 PS: This is quite likely my last posting here until I get to Malta and get "connected".
Posted by Cooper Renner at 9:22 AM

great msg for me, thanks a lot dude˙﹏˙

Yesterday (April 26) I was driving to school and thinking this is probably your first day back on shore. I think it might have been Azores day?

Wish I was there. I'm considering Orcas next month for two weeks, if I can get a good deal on a house.

Oh, and I'm Bodhi1999, couldn't remember my drtee password or if it was just drtee or something more.