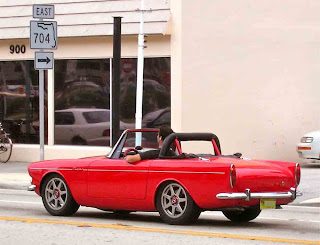 (This is not me in the convertible. I just liked the look of it, and I thought I should crop high enough to leave the Florida road sign in as well.)

I arrived in West Palm Beach yesterday evening after an eventful/eventual departure from Dallas/Ft Worth airport. After American Airlines boarded us on the plane while maintenance men worked on a mechanical problem, the crew had us deplane when the jet was taken out of service. We then had to go to another terminal and board another plane. We arrived in West Palm Beach, Florida, almost an hour and a half late -- but in a functioning plane!

I took a cab to the bed and breakfast where I am staying, just a few miles from the airport, and met the hostess and the writer contact/friend of mine who had recommended the B&B to me. The house has an enormous banyan tree in the front yard and, in the backyard, a pool and the small cottage where I am staying.

Today I spent a good part of the day walking, seeing the neighborhoods, and catching up on email and Internet errands. I had lunch outside on a bench in CityPlace, a mall and entertainment complex, after doing my Internet work and then took a walk over to the TriRail train station. On Monday morning I will take the train several stations south to the Ft Lauderdale station, where I will catch a bus or cab to the port to board the Equinox. I then returned to CityPlace and spent some time reading and drinking tea at the bookstore.

We had a little bit of everything today, weather-wise: sun, a nice breeze, some light rain, lots of clouds. After going back to the B&B for some afternoon time working on Disbelief and resting, I visited a bit more with my hostess, then walked back to the grocery store for some ham and a croissant to go with my supper. This evening, supper, TV, tea, reading and typing!
Posted by Cooper Renner at 7:47 AM