Today two amazing things happened: 1] I wore shorts; and 2] I used my sunglasses. Yes. In London.

Why? you ask. 1] The temperature exceeded 55 degrees Fahrenheit; and 2] the sun shone. Yes. In London.

I actually felt like a human being. I was able to sit OUTSIDE and draw without getting wet or feeling like a stalactite. And when I say, "The sun shone," I don't mean it shone for 12 minutes; then didn't shine for 37 minutes; then shone for 6 minutes; then--Well, you get the idea. The sun shone virtually the entire day. Thank you, high pressure system.

When I left the hotel of course, about 9:30, it was NOT 70 degrees. 60 maybe. But I wore shorts anyway, and a windbreaker. And I carried the other windbreaker in the backpack, AND the umbrella. I didn't dare believe that I might actually need neither of them all day. When I got to Marble Arch park, a half-mile or so away, I actually took the windbreaker off, even though it was still a bit chilly, and sat on a bench in the shade to draw. Sitting in the sun would have been nice, of course, but it's difficult to draw on white paper if you are squinting against the sunlight. I drew the huge horse-head sculpture, and a little scene involving two elephants (one mostly hidden) from the Elephant Parade. Here's that sketch, in small form: 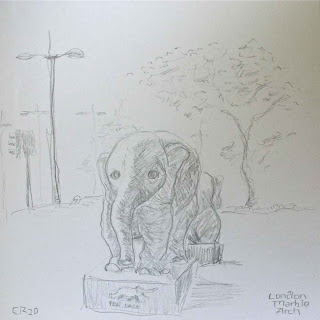 After drawing a while, I went on to Marks and Spencer (Oxford Street west) for morning tea, then moseyed on to Grant & Cutler, a bookstore that specializes in non-English language material, where I browsed a while without buying anything. Remember that I still haven't finished the two Spanish books I bought in Cadiz, since I've mostly been reading English. Then I went to Marks and Spence (Oxford Street east) for a jacket potato and tea for lunch. THEN I went on to my easternmost point for today: the Sir John Soanes Museum. This is a house-museum, established by act of Parliament in 1833, a few years before Soanes died, since the museum is what he intended for the house after his death. (He didn't have to move out before he died.) Soanes was a very prominent architect, with plenty of money, and his house actually occupied 3 previous addresses. It's full of his collections: pieces of old sculpture and buildings, a bit of ancient pottery, over 6000 books, paintings--LOTS of paintings, and so forth. In several places on the ground floor, there are grates in the floor, which I thought might be for ventilation purposes or for hot air from fires in the basement to rise up through (like the Romans did), but one of the employees told me that they were actually to allow natural light into the basement!

My next goal was Foyle's bookstore, a really big bookstore on Charing Cross Road, where I thought I might stumble across something I really NEEDED to buy, and where I might finally buy the poetry book "Dart" by Alice Oswald, which I've been intending to buy for a week now. The easiest way to get from Lincoln's Inn Fields, where the Soanes Museum is, to Charing Cross Road put me near Covent Garden, so I figured I ought to go ahead and make the detour and see if there was anything there I should look at. Along the way I came by this huge building, which I had noticed the other day, but hadn't known what it was. Apparently it's the Masonic hall--I'm not sure of it's official name. I don't know if you can tell from this photo, which I took kind of leaning and looking up at it, but it's quite imposing. 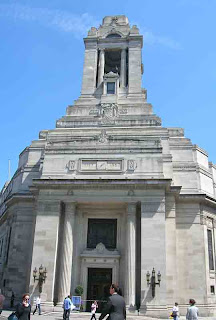 Well, there wasn't anything special as far as I could tell about Covent Garden nowadays--it's just shops and restaurants--but there was a couple of acrobatic sorts out on one of the open areas putting on a show. If you look carefully, you might be able to tell that the woman to the left is balanced on a straight-line ladder. 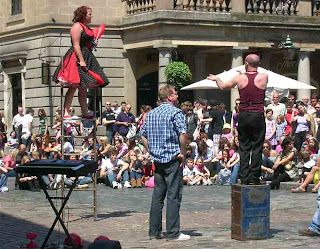 There was also a woman off to the side, in the shade near one of the buildings, with her easel set up doing a small painting--probably about 8 by 8 inches--of Covent Garden: it was going very well and looking quite nice.

Once I got to Charing Cross Road, I noticed this sign which made me think of my friends the Comptons, though they might not appreciate the designation "OLD". 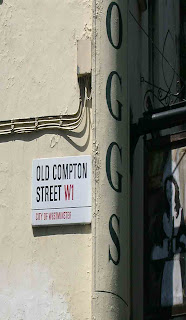 Many of you will remember the book and movie "84, Charing Cross Road." Well, if you look way over to the right in this photo you'll see the blue 82. That's Charing Cross Road. I took the photo the way I did because I'm sort of guessing that the Pizza Hut occupies the space that may once have been both 83 and 84 Charing Cross Road. Was there actually a bookstore at # 84, once upon a time, or was it all fiction? Your guess is as good as mine. 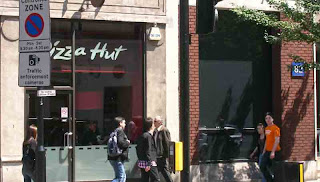 And then on to Foyle's. I spent a good while here--maybe an hour, maybe 45 minutes--looking more at the poetry section than anywhere else. The poetry section is quite large, larger than you're likely to see almost anywhere in the US, but of course the emphasis is English. And it's interesting to see the differences and who is considered important enough to be on the shelf and so forth. Poets who are hardly read at all anymore in the US are represented by one or more books--folks like Walter de la Mare, for example, or Mervyn Peake, who is known almost exclusively as a novelist in the US, or W.S. Graham, who has hardly ever been published in the US--and it's interesting to see an American poet like Wallace Stevens represented by "Harmonium", his first book, published almost 90 years ago, and not in print in the US as a separate book but only as a part of his collected poems. Some authors--not a lot--are represented by books from American presses, not English editions, and others which are available from different presses in the two countries look better in their English editions: Faber & Faber makes much more attractive and elegant poetry paperbacks than Random House does!

Anyway, whether being practical was the best thing to do or not, that's what I did. I bought "Dart" (which is available in the US only as part of a "selected" poems by the author) and resisted other temptations. Of course I still have tomorrow. . . .

As I made my way back toward the hotel, I made another stop at Marks and Spencer for afternoon tea, and here I succumbed to a different temptation: I bought a white linen long-sleeved shirt. I had noticed it at M&S before, and today I decided I could use another button-down shirt, especially something as light and cool as these are supposed to be. (Why any man needs a light and cool shirt in England is beyond me, but in Texas I HOPE it will be hot!

I've got to tell you: it was SO nice to be able to be outside without being cold or wet or both. It was so nice to sit in the shade and draw. It was so nice to walk down Oxford Street, on the SUNNY side of the street, and feel warm without feeling hot and sweaty under the multiple layers of jackets necessary to avoid feeling cold and miserable. It really was like being human again.
Posted by Cooper Renner at 12:23 PM

The longest I stayed in London was near Covent Garden -- in an apartment off Neal's Yard, which at the time was very trendy.

Oh, it will be hot in Texas, my friend, from what I hear. Have no fear.

Does heat still exist, outside of ovens, I mean? Heat in the natural world? Heat from the sun?

If you add 2007 and 2010 together, I think this will be my 21st night in this little hotel near Hyde Park. The other two nights were in a "swank" hotel as part of a bus tour.

Awe! That elephant is tooooo cute!