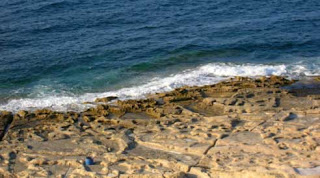 Late this afternoon (which was morning, Dallas time) I talked to my mom on the phone. She had just come in from a late-ish walk a few minutes earlier. I bought a phone card and called from an Internet cafe/international call center not too far from the hotel. It may have been the first time I have used one of those calling cards, and I'm sure the guy who told me how to use it thought I must be a relic of the Stone Age. Mom is doing well and is looking forward to the arrival in Dallas, in a week or so, of my little sister and her family, coming from Florida. Mom was planning to get together this afternoon (Dallas time: I think it hasn't happened yet as I write, after sundown here) with the Duncanville branch of the family for Memorial Day. Greetings to all!

I'm reading Dracula which, believe it or not, I've never read. While on the ship I borrowed from the ship's library Bram Stoker, a biography published in 1996, and found his life an interesting tale. I had no idea how serious his involvement in English theater had been. The author (Barbara somebody) seemed to strain too hard at delineating the idea of Stoker as a perpetual juvenile who needed a hero to worship and serve, but overall the book seemed solid to me. By the time I disembarked to fly to Malta, I was reading (and had not finished) the ship's library copy of E.M. Forster's Howards End, which I haven't seen in a book store here. I may have to wait till I get to England to buy a copy and finish it. I'm also still reading Ted Hughes's selection of Coleridge's poems. I read "The Rime of the Ancient Mariner" a few days ago--it has been years, maybe decades, since I last read it. It's a fine poem. I'm looking forward to re-reading "Christabel" soon.

Some of you might enjoy a couple of photos of Sliema under construction (or destruction, if you prefer). Buildings are going up, or being remodeled, everywhere, it seems. A walled city like Valletta is pretty well finished--buildings can be refurbished, but are unlikely to be torn down, I would think, given that Valletta is a "World Heritage City". But Sliema is newer and not sacrosanct. Some of the buildings seem to use cinderblock, which is then coated in something that makes it look more or less like limestone; and some of the buildings probably really are limestone. I'm sure that building this sturdily makes the buildings more secure, in the event of volcanic eruption (remember that Mt. Etna in Sicily is not that far away, nor is Vesuvius in Italy) or earthquake (Turkey, particularly, seems to be an active zone, and I don't know how far the shocks waves spread), but I suspect they also help to give the people some peace and quiet, living as so many of them do in multi-story buildings, surrounded by other people, above, below and to both sides.

On this wall, you can see where stairs, walls and floors were, in the building which is now gone: 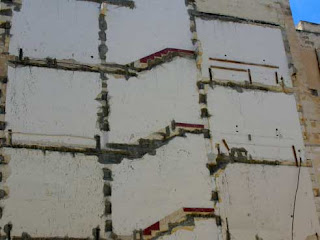 And this photo shows a wall with tile still remaining from the old structure and what look to be the holes where supporting beams were mounted: 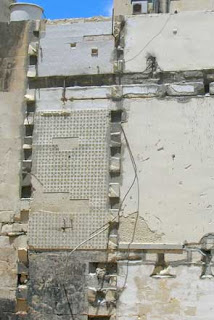 It may be (I simply can't remember for sure) that these two photos show adjacent sides of one square, but both are definitely from a little peninsula called Tigné Point, where a lot of work is going on.

If any of you want to price properties for your summer homes, one of the big realty firms here is Dhalia.com. 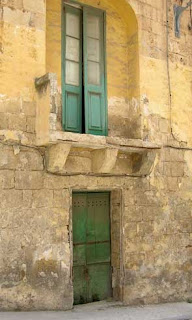 Fortunately if you fall, the ground's not far enough away to kill you.

There are any number of companies here offering "cruises" and bus tours to visitors. The cruises do various things: one of the shorter cruises goes up and down the harbors here in and around Valletta and Sliema and tells folks what they are seeing on shore. There are other cruises that take folks to Gozo (where I'll be in a couple of weeks) and Comino, which has only a few hundred residents. Mostly people go to Comino, I understand, to enjoy the beaches and maybe a barbecue for a few hours. Other cruises go all the way around Malta and/or Gozo. I'm almost positive this is one of the ships used by one of those companies: 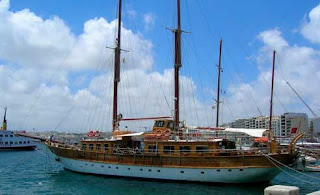 One company, Captain Morgan, also offers bus tours to various places on the island, handy for folks who don't want to fool with switching buses or having to walk too far between sites that are a bit further from the bus stops. I may use them for a trip to the Blue Grotto and the temples on the far side of the island, but I'm not sure yet.

I sat for a while on a bench at the harbor and drew this picture of one of the ships. You can see that my gangway is a bit off, as is the prow: 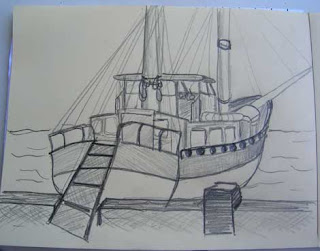 This drawing, along with others I've done here (as well as the little watercolor I did on the cruise), has gone into the mail: little bits of Malta for the nieces and nephews (who may not care at all!) I do, though, have one great-niece and one great-nephew who are "into" art, so they may enjoy the drawings, even if none of the others do.

One thing that surprised me about Malta is the prevalence here of English language schools. Malta is definitely cheaper for tourists than England, and most people here speak English, so I suppose it makes sense for Europeans from non-English-speaking countries to come here to learn the language: but it's not something I had expected. I reckon it's a nice way to combine learning a language with a warm climate and oceanfront hotels.

Because I'm staying here longer than most tourists do, I can afford to have a lazy day like today, a resting kind of day, and still have time to see the things I want to see. I still haven't gone through all of the main sites in Valletta, including the Museum of Archaeology, which has the terracotta soldiers from China in right now, nor have I visited the Teatru Manoel, one of the oldest theaters in Europe. One of the books says that, if you take the midday tour on Wednesday, you might get to hear a live performance as well as see the building. And there's the Armoury, which I might have to visit, just to say I've been there: and who knows? Maybe those lances and spears and arquebusts (or whatever those early rifles were) will be interesting.

It's been blowsy and dusty again today. The nice thing is it keeps the temperature quite pleasant. I even wore my windbreaker to go out for a while before sundown. The drawback is the dust in the eyes and the wind tugging at things more than you might want.
Posted by Cooper Renner at 7:10 AM

Sounds Great,we feel like were there,enjoying your daily accounts.

I'm always glad to hear from anyone who's reading! Are you folks doing okay nowadays? I hear Texas is getting a lot of rain.