A little this and that

It was one month ago today that I got in the rental car in Duncanville and headed off for Galveston to board the Grand Princess the following afternoon.

Congratulations to Marietta Fuess and Helen Bell, my co-workers over a number of years in El Paso ISD. Both are retiring and beginning their next lives: Marietta at the end of June, I think, and Helen within the week. Congratulations as well to Kayla Anderson, who will be Marietta's successor and guru of all things librarily technical for the EPISD librarians. And a big round of applause for Esther Arriola who will help Kayla ease into the job smoothly.

This photo goes out to Dave Larsen, also of El Paso, who is the world's foremost adorer of all things pigeon. I snapped this pigeon (I mean, I took its photo, Dave--I didn't snap its neck) while lunching at the plaza in front of the National Library in Valletta today: 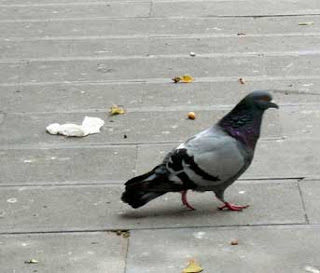 St Catherine of Italy Church had another concert this morning. Today there were three musicians--harpsichordist, flutist, and bassoonist--although all three played together only for one of the five sonatas. The featured composers were Telemann, Handel, Mozart, Vivaldi and Marcello. The crowd was smaller, but the music was equally lovely. This is my impression of one of the wall panels and the painting of the crucifixion that hangs within it: 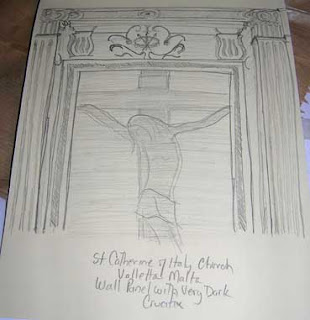 I am not Catholic and have not been keeping up much with news. Someone is being beatified or canonized this week, I gather. The friendly woman at the Hollywood Grocery in Valletta (which I frequent) reminded me that she would be closed four or five days this coming weekend because she is going to Rome for the ceremony/celebration. Perhaps one of you know who it is and can tell us all by leaving a comment.

Are there loud car-stereos in Malta? Unfortunately yes. But mostly they are playing dance music of some sort, rather than the hiphop/rap which is customary in the US.

Do I have the world's most obnoxious hotel guest in the room next to me? Perhaps so. Mind you, I'm not saying he's a brute, or a bounder, or a thug. Just obnoxious. His only volume level seems to be bellow, even if it's midnight and he's standing out in the hallway bidding the other members of his party/family good night. If he's irritated at one of them, then the bellow might become an aggrieved bellow. Judging by the accent, he's English or Australian. (Note: I have now seen the bellower, on the third floor. Is it possible he's so loud I think he's right outside my room when he's actually a floor below, or is it just chance I saw him below?) In the days preceding his residence in that room, there was someone (or someones) who liked to play Indian or Middle Eastern music loudly at 11:30 pm. Fortunately the walls here seem to be pretty thick, so most of the internal noise that comes in, comes via the wooden door. The external noise, of course, comes from the balcony. Certain motorboats crossing along the shore across the street seem to resonate with the balcony, making it almost vibrate.

On the other hand, one might look out off the balcony on a Sunday morning and see this: 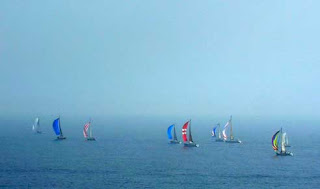 I "auto-enhanced" this photo. The morning was not as lovely as it appears here. It was hazy, humid, and quite unpleasantly warm. Later the wind picked up and the sky looked like sand might be blowing in from the Sahara (although Malta, a limestone desert island, might have all the dust it needs for beige-ing out the sky). Then for a while it cleared out a bit and was rather nice, then grey clouds moved in and the wind got almost chilly. An odd day for weather, to be sure. Of course I hear that Texas is getting deluged.

One day last week I gave you a photo of an external wall of the ruined Grand Opera House. Here is a close-up of one of the arched window openings above the much larger rectangular window openings. You can see the wood which has been wedged into the opening, apparently to keep the arch from collapsing. 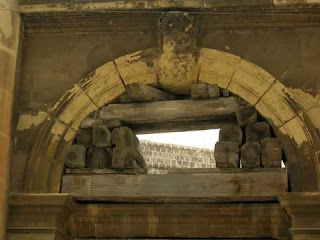 How is it that I didn't think sooner to take this photo of a restaurant just a few doors down from my hotel? 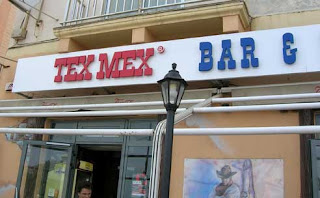 The menu includes a "jacket potato" which is, apparently, a baked potato. I may have one, one of these days.

This evening on the seawall I saw a tall guy wearing a Texas A&M t-shirt. I debated approaching and asking if he actually attended A&M, but finally didn't. He was quite tall, apparently quite intent on getting wherever he was going, and had a rather odd gait which left me a little unnerved.

This afternoon, after coming in from my sultry time in Valletta, I got into the Mediterranean again for a few minutes. Even on May 27, even on a sultry May 27, the water was quite chilly, and the waves were fairly high as well, urged up by the wind. They weren't rolling breakers like one gets in the Atlantic or Pacific, but since the shore here is rock, one doesn't necessarily want to be tossed around. I wonder what the the salt and mineral content of the Mediterranean is, as compared to the Atlantic or Pacific. I feel oddly coated when I come out of the water here, but maybe it's just been too long since I've spent much time in salt water.

Is martedí Tuesday? If so, I might get the chance to see how NCIS plays in Italian this Tuesday. It comes on at 9.
Posted by Cooper Renner at 6:19 AM