(NOTE: Because I'm currently having to make postings reflecting multiple days at once, I will reverse the posting date, so that you won't feel that you are working backwards. I will also add photographs, once I have access again to a reliable and affordably priced high-speed connection.)

Last night and again today I worked with the Garage Band program on my computer, something I had not done in quite a while. I recast some of the instrumentation for my earlier Syd and added a short, odd bridge to its center. I also worked on a new "composition" called Meditations on 'Falling', inspired by thoughts of a strange synthesized version of the Seeds' song Fallin'. It's far and away the most "industrial" thing I've done. Like everything else I've worked up on Garage Band, it's less than two minutes long. The only one of my recordings that anyone has heard is Ivor, in honor of Ivor Cutler, which is tucked into the travel section of my old Mac webpage. There is another piece which I may export to a CD for family when Christmas comes.

This ship is getting closer and closer to Ponta Delgada in the Azores Islands; we have journeyed more than 3500 nautical miles since leaving Galveston; and I still can't figure out why a 16-year-old boy in Big Spring, Texas, would want to play for a football team called the Steers.

Today we go ashore at Ponta Delgada on the island Sao Miguel, which is one of the Azores Islands and belongs to Portugal. This morning, while I was doing my walk, I saw the island in the distance about four times before I consciously realized it was land. 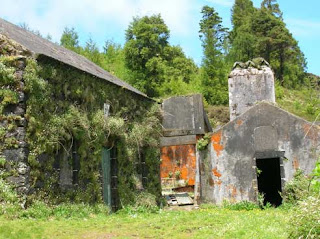 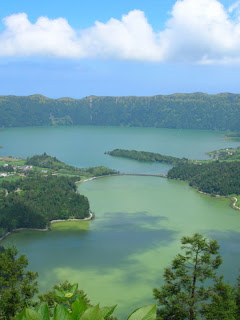 Sao Miguel is a volcanic island (as are the others in the group, I imagine), and so there is a great deal of basalt (a black rock) here. The people have used it in their buildings, creating a very interesting black-white style. Narrow streets, in the European way; houses and buildings sharing walls; and lots of walled fields and gardens. The temperatures range from around 50 in the winter to the 70s in the summer. 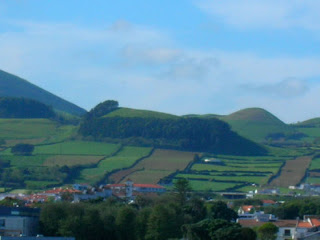 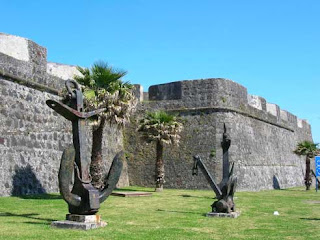 Of course I visited a bookstore (Feira do Livro), which must have been selling remainders or used books. The prices seemed very low. They carried a lot of comic books and graphic novels, as well as books in Portuguese, French, Spanish and English. I was very tempted to buy one of the French graphic novels, since the illustrations would have helped me make out the words I don't know, but I decided I first need to finish the French reader I already have!

I also spent my first euros today, at the Supermercado Sol/Mar (Supermarket Sun/Sea). I bought butter cookies, a (Portuguese) Coca-Cola, and bottled water.

I keep forgetting to mention that last Tuesday, when we docked at Ft Lauderdale, I was mistaken by one of the crew for one of the crew. Crew members were going ashore too (in shifts, probably), and thus many were out of uniform. I told a crewman, "I'm new at this. Where do we go ashore from?" He sent me to deck 4, where the crew were disembarking, instead of deck 6.

This morning, for the first time since leaving Galveston, the skies are completely gray and overcast. The wind is up, and the temperature is down. Folks are hanging about indoors.

Tonight we had comic Kelly Monteith for entertainment. Quite funny.

This morning we docked in Lisbon, Portugal. A warm sunny day. After an early lunch, I joined the "walking tour" which took us to three distinct sections of the city:

1] Alfama: the oldest surviving section of the city, where the streets are narrow and canted at odd angles. The guide called the neighborhood labyrinthine. Families have lived in the same apartments for decades and shop in the small shops down below at street level. The Cathedral is in this part of town and is quite beautiful. Different parts are from different periods, but the oldest is from the 12th century. Alfama is quite hilly: good for walking.

2] Downtown: the central shopping district is literally "down", in a valley that runs to the River Tagus which Lisbon is built upon. There is a long pedestrian mall, flanked by all sorts of shops and businesses, running between two plazas. Cross streets have shops as well. I went into a couple of coin shops and a couple of bookstores, as well as having a piece of marble pound cake and a can of Lipton tea [!] in a padaria (bakery). This is a convent which was ruined in the earthquake, and is now an archaeological museum: 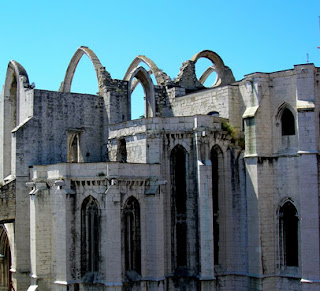 3] Bairro Alto: "uptown", again literally. The streets are a bit wider than in Alfama and cross each other at right angles. At street level, many of the shops/apartments are bars, full of young people at night (we were told), making it difficult for the residents in the floors above to sleep! It is the "happening" part of Lisbon. Both Alfama and Bairro Alto are built on hills which flank downtown.

The earthquake of 1755 destroyed much of Lisbon and killed thousands of people: much of the building postdates that time, and many buildings are now in the process of being restored. Our tour guide told us there are about 5000 old buildings (multi-floor apartment buildings etc.) in Lisbon and about half have been restored so far. Apparently the city intends to get them all restored. One can see restored buildings built directly against (sharing walls with) adjacent buildings which have not yet been restored.

Getting back to the ship I saw this sign in the terminal/harbor building: 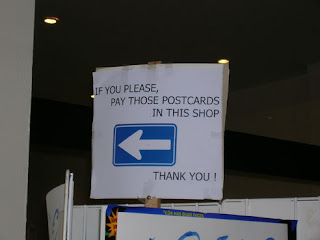 Tonight I listened to a performance by the Armadillo String Quartet from Canada. They're quite good. On to Barcelona!
Posted by Cooper Renner at 1:56 PM

This whole thing is making me jealous. I'd gladly be mistaken for a crew member! And I'm sure butter cookies taste better when paid for in Euros.