This afternoon (early morning California time) I talked to my sister Jane whose birthday is tomorrow. Happy birthday, Jane! She is looking forward to a good day, and since it's a Sunday, my brother-in-law doesn't even have to be at work. Y'all have a great day.

The weather today was odd: cloudy, still and warm this morning; giving way to cloudy, blustery, chilly and wet; giving way to drying with some break in the clouds, but still chilly. A longish shower during the "wet" time, though nothing like what I hear has been going on in Texas. A good day for staying close to the hotel, having tea at Stella's, reading and doing email and Internet.

I sat for a little while this morning in the park at Tignè Point and worked on this drawing until it began to sprinkle. 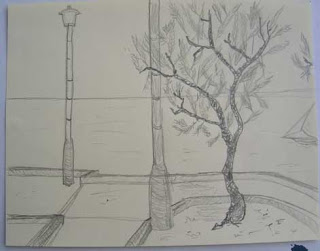 This photo will give you a bit of an idea how the condition of the houses can vary within any given block. Although here the variation is not as extreme as in some cases, you can see that the home in the middle has either been renovated or consistently maintained, whereas on each side the homes have allowed their stone to become stained and weathered. 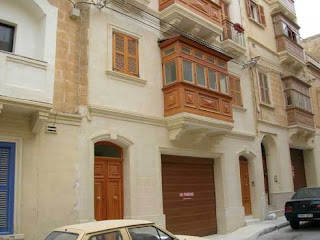 In this photo, the second floor balcony (actually the first floor, they would say here) has a recent banister/fence around it and has nicely done flower pots. Likewise the balcony to the right has a very attractive and heavy stone fencing. The ground floors show obvious signs of fairly recent cleaning and tending, but the upper floors are weathered and stained. 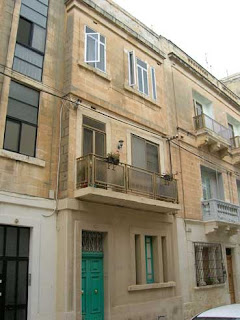 This photo shows where a new house or business is being put into a space where, I presume, a previous structure has been torn down. You can see that limestone blocks, of that lovely creamy yellow, are going to be used in the new construction as well as cinderblocks, especially, it seems, on the side walls which will be hidden from view. 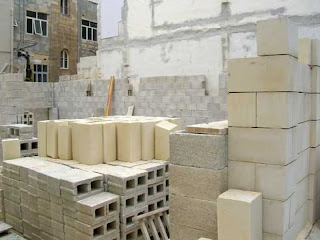 Was it only the English who used to name, rather than number, their homes, or was this a common practice in other European countries as well? Whether the influence comes from the period of English control, or dates back to the time of the Knights, one can see homes, especially on the side-streets away from the newer construction, with name-plaques as well as numbers (which I'm presuming are newer). While many of the house names are clearly English--St. Clair, Daisy, Clarence, and this one-- 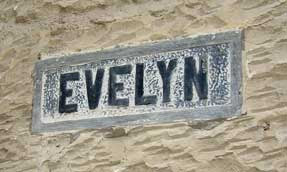 others show different linguistic backgrounds, some of which may be Maltese. But are these 19th century (or earlier) survivals, or the signs of more recent purchases by folks from other countries? I'm assuming, for example, that the house I saw in Rabat named "Vie en Rose" is a fairly recent naming. Many of these houses off the "main drag" are two-story, plus basement: nice-looking, sturdy-looking edifices. Mind you, they are not separate buildings with yards, but separate buildings built right up against their neighbors and right up to the sidewalk. Many have double sets of front-doors: that is, there is a double-door at the sidewalk with, about two feet back, a second double-door, which presumably leads directly into the house or to a staircase to a first-floor-above-ground dwelling. The thickness of those cinder-block and limestone walls helps to explain how they can stand to live so close to one another: there is at least some muffling of the city noise, once one is behind one's own doors.

Out-Bellowing the Bellowers: Yes, that's right. The Bellower has been bested. Early this morning (3 a.m.) I was wakened by the two young men who came in talking as loudly as New Yorkers discussing the Mets on a Manhattan street corner during rush hour. When it continued without abatement, I stepped out into the hall to see if they were sitting in the chairs grouped near the staircase. That's when I discovered they had moved into the room directly next to me (the room once home to the Bellower's parents) and were presumably the same guys who woke me up at 1:30 a.m. the day before. They were in their room, still talking as they needed to be heard over the roar of an approaching subway. So I knocked on the door. One of them opened the door, apologizing profusely, and they did actually quieten down. Then this morning, when I went down to breakfast, their "Do Not Disturb" tag was hanging on their door. Ah, if I were a crueler man I would have stood there and screamed bloody murder and banged on their door! (The "Do Not Disturb" placard was still hanging there when I returned to the hotel at noon to have my lunch.) Now they are awake, with the TV blaring. I hope I get to sleep all night tonight. Apparently I have been consigned to the Absolutely No Social Awareness At All wing of the hotel. Too many people here seem to think life is a screaming contest.

Of the newer hotels here, Le Meridien in St Julian's (San Giljan in Maltí) most impresses me. (There is also a Le Meridien, aka The Phoenician, just outside the gates of Valletta.) Instead of a boring high-rise block, this Le Meridien feels like two joined pieces, only one of which is loosely rectangular, the other having a sidewall which juts off at quite an obtuse angle. Le Meridien looks like a sequence of tall vertical units, most of which protrude from the core at different distances, creating a kind of wavy flow, instead of the flat outer surface so common to high-rise hotels. I suppose the architect was simply adapting the structure to an existing lot structure, but when you add to this staggered front the balconies on every outside room and their smoked glass sliding doors, pillars built onto the multiple corners, and a stucco or faux-stucco exterior, the overall effect is eye candy. And the hotel is, in fact, absolutely enormous. I can't imagine how many hundreds of rooms it must have.
Posted by Cooper Renner at 7:22 AM

I think I'll have to come over there and accost the Maltese tourist board for putting 'the quiet American' in the 'Absolutely No Social Awareness At All wing of the hotel'.