Today is the 63rd anniversary of D-Day, a horrific battle that fortunately led to the ending of an even more horrific government.

St John's Co-Cathedral may have been the first "historic" site I visited after arriving in Malta a little over three weeks ago. But I got there not long before closing time and did not see everything. Besides, I wanted to see once more some of the things I did see the first time through, not least being Caravaggio's enormous painting of The Beheading of John the Baptist. This time I checked one of the books in the gift shop and found out that (presuming I'm remembering correctly) the painting is something like 360 cm by 520 cm, which would be something like 12 ft by 17 ft. Maybe I'm remembering the figures wrongly, because the painting certainly looks a good deal larger than that, if only judging by the size of the Oratory, where it is located. But then again, maybe I'm just not good at estimating. You'll have to find a Caravaggio book yourself, to have a look at the painting: photographing the painting is strictly not allowed.

In other parts of the church, one can take photographs, but without flash. Now if one is blessed with one of those complicated cameras with which one can set the exposure time, then one can get a decent photograph in low light by using a longer exposure time. But I am not blessed with such a camera (and probably couldn't figure it out if I were): the only setting on my camera which seems to turn the flash off is the "sports" setting, which takes photos very quickly. Why does this matter? Because I did indeed take some photos today and will put some of them here, but they will not look terribly good because I had to make the photo program on the computer compensate for the lack of light.

One of the things I wanted you to be able to see was the richly decorated tombstones which cover almost all of the cathedral floor space. Scenes like this one are not uncommon: the knights didn't seem to have any interest in pretending that death was anything but death: 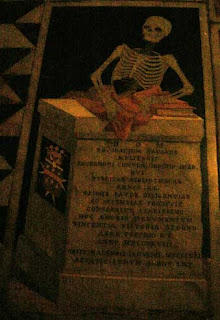 The artwork is done in marble, sharply and beautifully: the haziness of the photograph makes the details look blurred. D.O.M. (the top line in the inscription here) is obviously some kind of conventional abbreviation that shows up on more than one tomb, but I don't know what Latin phrase it stands for. You can see that there is plenty of information included on the stone, for those who read Latin.

This one, with its cherubs, is more cheerful than the other, but note the skull and crossed bones at the top. When this motif was adopted by pirates, I don't know! 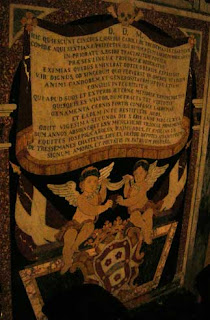 This painting of St George after he killed the Dragon is not at all dark and dingy (though there are plenty of paintings in the cathedral that are): the culprit again is the lighting. While we tend to associate St George with the English, the chapel in which this painting hangs was not for the English-speaking knights, but rather for the Spanish (or was it the Italians?) 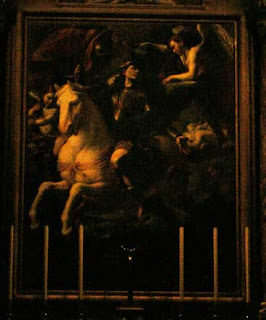 In addition to the framed paintings which decorate the church, it is also loaded with murals painted directly onto the walls and ceilings. The main body of the church, the nave, is a barrel vault. Mattia Preti of Italy painted the vault, dividing it into 6 broad bands, or panels, of scenes. Each of the panels has a painting on the left side, as you face the altar; on the right; and directly overhead in the center. All of the scenes relate to the life of John the Baptist. I was able to get a photograph of a section of the vault, but it is so enormous and the photo taken from so far below that it didn't seem worth putting in: you simply can't tell enough about it.

This painted crucifix hangs in the passageway which leads from the nave to the Oratory, where the Caravaggio paintings are kept. It's essentially two-dimensional, of course, except for the thickness of the wood and seems to have some characteristics of Byzantine icons: 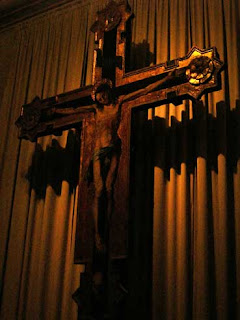 It's almost impossible to convey how ornately decorated this church is. There are some flat marble surfaces on the pillars in the nave which are simply marble surfaces, but almost every other surface in the church is decorated--painted or carved. You could look for hours, and in fact I spent about 90 minutes there today.

One of the things I had not seen on my first visit was the collection of enormous tapestries. There is a set of fairly narrow tapestries--maybe 6 feet wide and 15 to 20 feet high--each of which depicts one of the 12 apostles. Then there is another set, depicting scenes from the life of Christ, which are more or less square--15 to 20 feet on each side. The designer/artist was from Northern Europe--they are called the Flemish Tapestries. Together they form the largest complete set of tapestries in the world, according to the audio tour, and they are displayed in two different rooms at the church. One of these rooms also features the Choral Books: hymnals if you will, for the choir. They contain hand-painted illuminated illustrations and are bound with leather over wooden boards. Because of the poor condition of some of the bindings, you can actually see the boards and nails under the leather. But the pages--at least the pages the books are open too--are in very good condition and are quite beautiful. The books are something like 32 inches high! The other tapestry room has cases of priestly garments from the days of the knights. I learned that a chasuble is essentially a poncho.

There is also a hall of paintings, which I had missed on my earlier visit, but I don't recall any paintings here which wowed me. The crypt where several of the earlier Grand Masters to rule on Malta are buried is currently closed to tourists for preservation reasons. Rats! I would have loved to have seen that. Part (all?) of the crypt is underneath the altar and sanctuary at the front of the church.

Here's a little photo for you readers of Acts of the Apostles: I'm not in Damascus, but this is indeed a street called Strait! 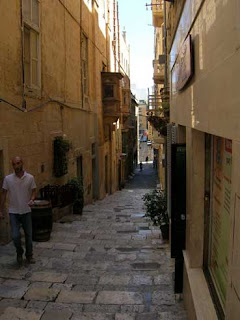 Today the weather was lovely--pleasant in the morning; warm once the sun was well up; cloudless, blue skies. The waves were still crashing this morning, but had calmed down this afternoon. The sun-bathers were out again, and some folks actually got into the water. This morning, as I walked from the hotel along the seawall, I also saw what was apparently a scuba-diving class or group swimming near where a kind of corner is formed as the shoreline juts out into another little peninsula.

And I'm sure you're all dying to know that I am almost finished reading Thomas Hardy's The Woodlanders and today purchased my next book: an anthology of mummy stories called Return from the Dead. It contains, principally, Bram Stoker's novel The Jewel of the Seven Stars along with four shorter stories including two by Arthur Conan Doyle. According to the back of the book, Doyle's "The Ring of Thoth" was the inspiration for Boris Karloff's original The Mummy movie.
Posted by Cooper Renner at 8:35 AM

Deo optimo maximo, "To God, most good, most great." You've got a nice little memento mori thingy with the skelly-ton there.

Just wanted to add that where you see this death stuff, especially from the Renaissance, you might encounter the "As you are, I was. As I am, you will be"--almost always accompanying bones or a skull. It's one of my favorites. I saw it once in a tatoo parlor (but didn't get it, of course, no tatoos for me). I also saw it in the Capuchin Monastery in Rome, where they have the bones. I think I first saw it on a Mantegna painting.

An anthology of mummy stories. Oof! That makes me chortle.