I took a long strollish walk this morning, not in any particular rush most of the time. I was aiming toward Westminster Abbey and the 11:15 service, but I left the hotel about 9:30--plenty of time. I walked south and a bit east in Kensington Gardens, farther that direction than I had yet been, heading for the Albert Memorial. Prince Albert was Queen Victoria's much-beloved husband, who died about halfway through her 64-year reign. I'm thinking that Tennyson, poet laureate by that time, dedicated Idylls of the King, his Arthurian epic, to Prince Albert, and Victoria mourned his death ferociously. This is a close-in shot of the memorial: 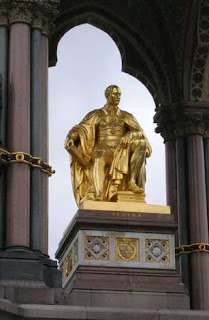 And this is a shot of the whole tower: 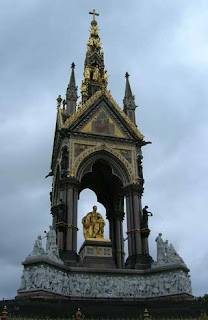 This is so much gold (or gold-colored) surface that it reminded me of Byzantine religious icons, which used gold paint so extensively.

Directly across the street from the memorial is the Royal Albert Hall where zillions of prominent performers have played over the decades, including personal favorites Cream, both before disbanding in 1968 and during their reunion concerts in 2005.

Did I mention that it was raining? It rained almost all day--with a break of an hour or so in early afternoon. The umbrella I bought Thursday evening sure got a good break-in today. The temperature might have reached 65, though it wouldn't surprise me if it didn't. I wore a t-shirt, a long-sleeved shirt and--a good deal of the time--a windbreaker.

Attending services at Westminster Abbey was sort of odd, because the choir stalls create a big visual blockage, right in the center of the Abbey. I was sitting in a small section opposite the choir stalls and had to sort of look across into the transept (I think that's the word--where the long and the short axes of the church cross) where the Archbishop of Canterbury Rowan Williams stood as he preached and where communion was served. Today was a confirmation service, and several of the 10 boys who were confirmed had the kind of names one might, stereotypically, expect to find in English families, but not in American: Augustus, Raphael, Maxim, Callum and--yes, Dickens fans--Pip! (I made an effort to remember these names.) The organ was powerful, and the choir was good--though some of the music, with the high voices singing, was almost eerie. The choir sang "Panis angelicus", a song I like very much, during communion. The Archbishop preached about being good listeners and good speakers, capabilities--he said--which the Holy Spirit will help to develop in the newly confirmed. He stood at the doorway as we all left, shaking hands and greeting everyone. So I have now shaken hands with the Archbishop of Canterbury!

Not far from the Abbey is the Churchill Museum (I haven't been to it), and just outside it is the memorial to those killed in the terrorist attack in Bali in 2002. The names of British citizens are in the center of the memorial wall, but the memorial names all of the other dead as well. 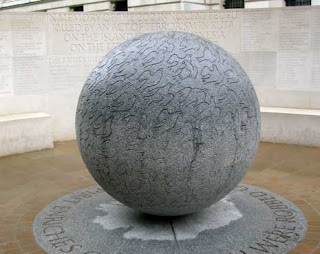 I went into St James's Park, just west of the museum and memorial, to find a dry bench (it was still raining, but the trees are thick and tall in the park) where I could sit down and have a can of tuna and the remainder of my morning shortbread cookie. These pelicans were huddled on a big rock in the pond at the park. They didn't seem to be enjoying the chilly damp weather either. 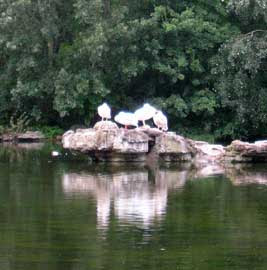 After lunch I wandered on north, past where No. 10 Downing Street is (I guess it's behind all those guarded iron gates), through the arch where the Horse Guards are, and up toward Trafalgar Square. Here there is a high high pillar with a statue of Admiral Nelson (right?) up on the top. I took a picture, but it's not really worth much. It looks like a pole with a doll on top! And just north of Trafalgar Square is the National Gallery, an enormous museum full of paintings. I did not see everything--there's far too much to concentrate on in one visit, and it may be that I'll be back here later in the week anyway. One of the nice things about the gallery is the computerized information center where you can search by artist or title of painting and find out what room it is in. The computer will also give you information on the artist and and the painting.

The delights here include several Van Goghs, among them Sunflowers; quite a number of paintings by Pissarro, Cezanne and Monet (North Texans might be especially interested in his Flood Waters); and Seurat's Bathers at (I forget). There are also two Leonardos--The Madonna of the Rocks and a cartoon (a preliminary drawing) for a painting of Mary, holding Jesus and sitting on her mother's lap. The Gallery also has three paintings by Caravaggio (it's his enormous Beheading of St John the Baptist which is in the cathedral in Valletta, Malta, and in which the beheading is not yet complete). One of the paintings is the immensely repellent painting of a boy being bitten on the finger by a lizard, and another--recalling Valletta--has Salome with the head of John the Baptist.

Sometimes I just strolled from room to room, watching to see what caught my eye. Today bright blues (normally skies) and dark but very detailed scenes seemed to do the trick: who knows why?

It was after leaving the Gallery that I discovered a bookstore specializing in non-English language books. While eating my turkey slices and drinking my Marks & Spencer cola at Hanover Square (at least I think that's what it is), I got a few photos of this bird, determined to get some use out of this discarded apple: 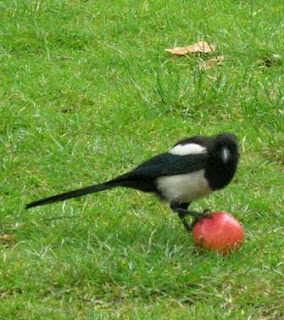 Hey, it's ten o'clock, and I think it may have finally stopped raining.
Posted by Cooper Renner at 10:28 AM

I looked up Birdcage Walk for you, as I didn't know where the name came from either. James I and then later Charles II had big aviaries there, hence the name. It wasn't open to the public until 1828. Pepys mentions it in his diary.

I have run into people that I know from home in London. One time I saw Eddie and Susan Lowry, but it wasn't them! What are the odds that two people who looked just like them would be together? I did see someone I worked with at the Fortnum and Mason soda fountain.

Hey, I recently added a news widget from www.widgetmate.com to my blog. It shows the latest news, and just took a copy and paste to implement. Might interest you too.