I began the day today (well, after breakfast, a walk and getting cleaned up, I mean) at the bookstore, first purchasing (for the second time) W.G. Sebald's Vertigo. (I also bought the new "miniature" edition of James Wright's The Branch Will Not Break for a whopping $5.95.) Then I settled into the coffee shop with a cup of tea and a bagel, and began to read.

After lunch at the house, the family and I went over and up to Red Rocks, the concert venue in the foothills of the Rockies, west of Denver. We weren't able to go into the amphitheatre itself to take a look because it was being prepared for a concert. This shot shows a bit of the rocks and a statue of a miner at the head of the sidewalk leading into the topside of the theater. 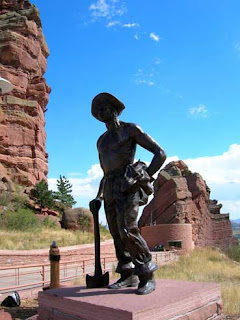 From the parking lot I was able to get this shot of Denver in the distance. 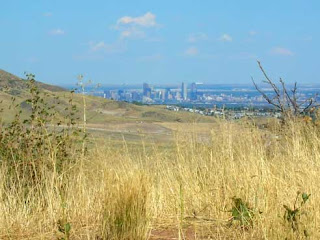 At another spot along the road, there is an overhang with a lot of tiny "caves" which people are allowed to climb into if they want, though most of the rocks around the theater itself are off limits. Here is my great-niece crouched in one of the nooks. 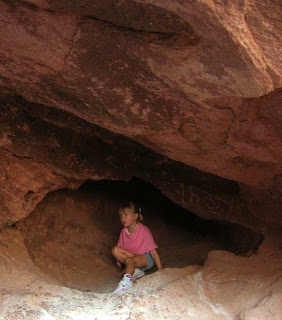 From that stop-off I also looked up to take this photo of an evergreen silhouetted against the blue sky. 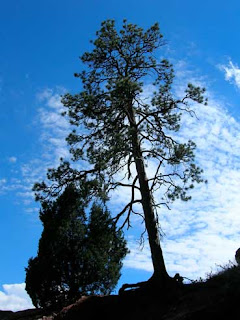 At the base of the Red Rocks road is a little town called Morrison, with a couple of blocks of mostly touristy shops and restaurants. One shop features unusual clothing as well as African and Asian imports, but the others are pretty much the sorts of antique shops and "boutiques" one expects. We had an early supper at the Morrison Inn (I brought my food along, to be sure) where no one but my nephew-in-law was able to finish his meal. The portions were big.

Now we're back at the house again, we've had some rain, lightning and thunder, and we're about to start a game of Sequence. Have a good evening.
Posted by Cooper Renner at 9:33 PM