Wednesday morning, a damp gray mess, we strolled from the Walliserhof to the train station to catch a ride up to Zermatt. There most of us switched over to the Gornergratbahn, the Matterhorn train which takes about 40 minutes going up to Gornergrat station at 10132 feet above sea level, from which we would have--with any luck--a great view of the mountains as well as a chance to get a snack and drink and browse a touristy gift shop. Outside the station, a local company also snaps group and individual photos, and we were scheduled to have that done as well.

As we ascended the mountainside in the train, we watched the rain turning to snow outside. Lots of us were lowering windows and snapping photos of the scenery, even though it made the train a bit nippy. Some of us even saw a fox or two in the forest, though I missed out. Rats!

When we reached Gornergrat Station, we hurried out to have our photos taken as the snow was coming down fairly heavily, and the thick gray clouds were allowing no site of the Matterhorn. We lined up on a three-stepped set of bleachers for the group photo--just like school!--and then had our individual photos taken with the photographer's St Bernard dog. The photos would be available for viewing and purchasing when we returned to Zermatt.

Here's a picture one of the girls snapped of me, standing next to the station sign. Please note the amount of snow on the wall behind me, and even on top of the sign itself. 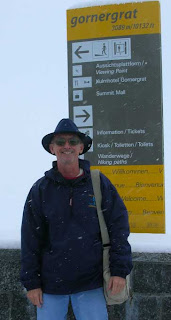 After getting photos shot here near the station building, we hurried up to the observation building where there's a nice enough cafe and another (enclosed) observation point. I had tea of course, though Janis and Debbie opted for hot chocolate, I believe. I snapped photos of each of them with Cristian, the guide, and we talked to him a bit about music. Switzerland is not a non-smoking country, and the cigarette smoke inside the building gave me a headache, though I didn't notice any particular effects of the higher altitude.

The snow continued to fall, and the clouds continued not to part, and the Matterhorn was not in evidence.

We wandered back down to the station building and looked at souvenir gifts for a few minutes, and then it was time to make a decision: leave with the next train to go back down to Zermatt, or hang around another 25 minutes on the off chance that the clouds might part and allow us a sight of the mountain. We asked the photographer what he thought, and he said it would probably be a couple more days before the Matterhorn was visible again, so we decided to get on the train and head back down, leaving ourselves a little over an hour to have lunch and a little bit of wandering in Zermatt.

Here's the photo I took of the station as we prepared to leave, snow still falling. 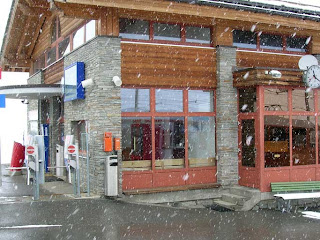 We were all disappointed, to be sure. We'd spent $62 a person to take the train up to see the Matterhorn, and hadn't seen the Matterhorn. Of course we had what was surely, for many of us, our earliest snowfall of any year of our lives! On the way down, I took this photo of snow on the trees in the forest. 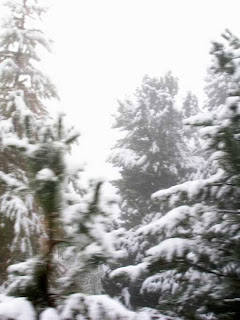 Back in Zermatt, we ate lunch, and the girls bought the group photo--in which the Matterhorn magically appears! Then we wandered town a bit before time to meet the train back to Täsch and the bus.

We spent most of the afternoon in transit from Zermatt to Lausanne, though we had a nice snack break at a Marché stop along the highway. Along the way we passed the castle of Chillon, famous from Byron's poem, and Montreux, site of the international jazz festival every year. I suppose it was 4:30 or so when we reached Hotel City in the heart of old Lausanne. While the girls settled into their room, I zipped over to the Coop grocery to get some food for my supper. Then we walked uphill to the old cathedral (closed, so we didn't get to go inside) and the Chateau of St Marie. Then we circled back around past the Palais de Rumine--which now contains museums and libraries. The girls were amused that I stepped in dog poop and tried to wash it off my shoe in water splashed from a fountain. As we wandered another street or two on our way back toward the hotel, a young couple asked us to take their photo at yet another fountain. Then the girls went to a pizzeria for supper, and I did some more walking.

I got my camera, which I had forgotten when we left the first time, and headed for the Rue de Bourg, Lausanne's "high street". It was full of expensive shops, most of which were closed or closing by this time. The street sort of angled downhill toward a Protestant church--the Eglise St Francois. It was open, and I went inside and sat for a few minutes and listened to the organist practice. While he (she? I never saw him/her) played, a young man at the rear of the church seemed to be working out some sort of dance routine to the music. Whether he was actually preparing for a performance at the church, or was just a little "touched," I have no way of knowing!

After leaving the church, I picked up a cup of tea at--gasp!--Starbuck's. The only one I saw in Switzerland, though I assume there are others. It was the only place in Switzerland where I had a large cup of tea--24 ounces, I assume. That was nice!

Then I headed off in the waning light of the evening downhill toward Lake Geneva. It was a mile or so, I suppose. I passed shops, an art gallery, an "English church" and buses as I stretched my legs. By the time I got to the shore of the lake, it was clear I didn't have much time if I wanted to get back to the hotel before full dark. I took a photo of a swan, whom I was unable to convince that I didn't have food on me, and this photo, looking out across the lake: 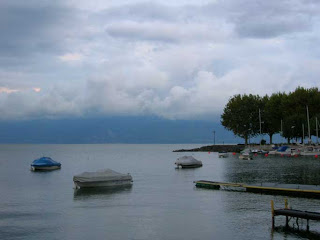 Now since I had a fairly easy downhill walk to the lake, a not-so-easy uphill climb faced me on my return. Bus tours don't allow one lots of time for any sustained exercise, but I certainly got my workout in Lausanne.

Back at the hotel, I got cleaned up, then went over to the girls' room. We played a couple of games of Yahtzee (believe it or not, I won) and I snapped this photo of the Cathedral out their window: 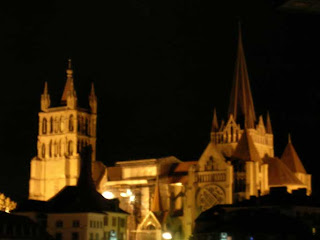 My window, on the other hand, overlooked the intersection the hotel sits upon. Sigh.
Posted by Cooper Renner at 8:31 AM

We were all disappointed, to be sure. We'd spent $62 a person to take the train up to see the Matterhorn, and hadn't seen the Matterhorn.

Hehehe. You put it all in perspective, don't you? Hehehe.

Your tone here is evocative. I sense your yearning to see the mountain. And your disappointment when it was invisible.

As I read, I inwardly turned it to me. The veiled knowledge I yearn for, still veiled after the trek for enlightenment?

Still, your trek! Wonderful things along the way! At the end of it, a story of sojourn! And friends, with whom you play and to whom you recount.