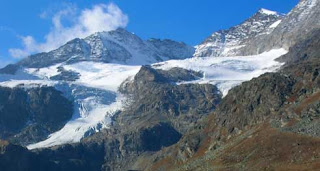 Departure for Switzerland was set for 2:55 p.m. on Friday, September 21. My kindly niece April got me to the airport in plenty of time; I got checked in, certified secure, deloused; I looked for some snacks to take on the plane. About 1:30 my traveling partners Janis and Debbie showed up. 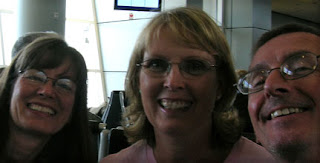 We visited a bit, then boarded the 767 around 2:30. At 2:55, we didn't take off. Finally they told us that the fuel tank wasn't communicating with the fuel gauge, so that their full tank wasn't registering on the instruments. We sat. And sat. And sat until they got that problem solved. We finally took off about 4:35 for the long flight to Zürich. I snoozed some, but not a great deal. I read from R.F. Delderfield's To Serve Them All My Days, a novel I had first read in the '70s when it was new. I watched TV. I listened to music.

Did I mention the flight was long?

We finally arrived in Zürich about 9:30 a.m. on Saturday, September 22, which was of course about 2:30 a.m. to our North American Central Daylight Time bodies. While I was still waiting for my suitcase to come onto the carousel, we got a PA announcement asking us to show up at the information desk for our connection to the hotel. It was nice that we didn't have to wait for that ride, since we were already over an hour and a half late getting into Zürich, and very tired. A young couple from Ohio was waiting the bus as well, so they were the first folks of our tour we met, along with our tour guide, Cristian. Cristian is a young Italian, who lives not far from the Swiss-Italian border when he is not directing Cosmos tours. With curly blond hair and blue eyes, he was quite the charmer for our ladies, including Janis and Debbie. He likes to sing Dean Martin songs, which he told us he learned from listening to the CDs, since Dino was long since retired by the time Cristian was born. Our driver, Massimo, also an Italian, was probably in his 30s, and didn't speak English, so we mostly just nodded and smiled at him. Massimo has thinning red hair, so neither he nor Cristian have the stereotypical Mediterranean "look."

After getting checked in at the hotel (Novotel, near Zürich's Technopark, about a mile or so from the city center), we walked over to a Migros grocery store which Cristian pointed out to us. Migros has a hot foods section as well as groceries for the home, so Janis and Debbie and I got ourselves some lunch and sat outside to eat. After lunch Janis decided to return to the hotel to rest. Debbie and I went for a walk down toward the city center. We didn't quite make it all the way there, but we walked for a good while (for jet-lagged people), passing factories and high-rise apartments and stores. When we reached the last street before the bridge over the Sihl River, we came upon the demonstration I already mentioned--building trades people marching for higher wages.

After they passed, we crossed the street and looked down at the river, then began our walk back to the hotel. Debbie went in to rest, and I went back out. I walked around the somewhat industrialized area, took a few photos 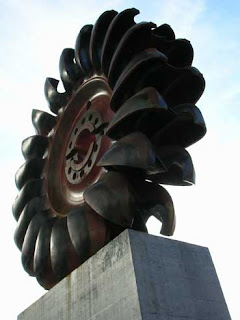 and stopped in at a coffee shop and bookstore to get a cup of tea to go. Now you may be asking yourself, "Since Renner is carrying bags of instant oatmeal and tea bags, why does he need to buy a cup of tea?" The answer is simple: Swiss hotels, unlike English and Irish hotels, don't have "tea fixin's" in the rooms. No electric kettle; no tea and coffee bags; no sugar; no coffee cups. And since the cups in the room were plastic, rather than paper or styrofoam, I was a little leery of using them with hot water from the faucet.

Yes, I used hot water from the faucet to make tea and oatmeal. The water was quite hot, and so it was the best a non-electric-kettle-having room could offer. I re-used the cup from the coffee shop. Now at some point I noticed that the room also featured some small wine glasses, and I used one of them for both oatmeal and tea when we returned to Zürich at tour's end, but on this occasion, the first night in Zürich, the coffee shop's disposable tea cup had to do.

And in case you're wondering, a small cup of to-go tea is not cheap in Switzerland. This first cup on the go cost me, I believe, four francs--but at least it had the advantage of being good quality loose leaf tea prepared for me at the shop. All the other to-go tea I had on the trip was tea-bag tea, generally (if not always) Lipton's "yellow label" tea, and the price never dropped below 2 francs 90, and usually was 3 francs to 3 francs 50. Three francs is roughly $2.50, so that's a pretty expensive 8 to 10 ounce cup of Lipton's. Other than that first coffee shop, the best tea offering I found in Switzerland was at the Novotel breakfast, where we were able to drink as much as we wanted, selecting from at least a dozen varieties.

Here is some general information about Switzerland, garnered mostly from Cristian's intro as we rode from the airport to the hotel, from our tour meeting the first evening at the hotel, or from our bus ride Sunday morning to Appenzell:

1. Zürich is the biggest city, with about 350,000 inhabitants, and is a Protestant city.

4. The country is evenly split between Catholics and Protestants.

5. A low salary in Switzerland--the salary of a housekeeper or beginning factory worker--is about $3000 a month (not including the amount the employer pays in taxes to the government).

7. About 80% of Swiss imports come from Germany; about 60% of their exports go to Germany. They export watches, chocolate, cheese and (of course) Swiss army knives.

8. Only about 4% of the population is involved in agriculture. 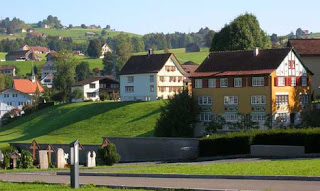 is in an agricultural region where the alpenhorn and yodeling originated, as a means of communicating from hill to hill. We spent some time on foot here, wandering around, visiting the cemetery where I took the photo of the stained-glass-and-metal "tombstone" posted yesterday. I noticed here, and later in Lungern, how many residents had lived into their 80s and 90s.

In Liechtenstein, we also had time to wander about. Janis and Debbie bought some souvenir gifts for family members, and I had another cup of tea! I also snapped photos of sculpture on display in the middle of the city. I posted a photo of the Henry Moore sculpture yesterday; here's a photo of a rather lovely abstract: 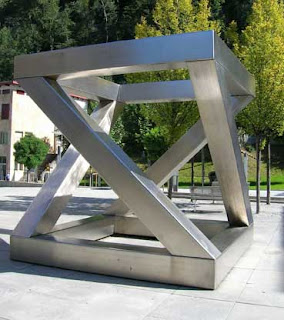 There is a small booth, right near where the bus let us off, where one can pay 2 francs to have one's passport stamped for Liechtenstein: and that's what I did.

From Liechtenstein we went back into Switzerland and made a stop at a much better version of a U.S. truck stop for lunch and WC (water closet--toilet) break. "Heidiland" is in the Heidi part of Switzerland and features a tower out of which Heidi, the goat and Peter appear once every thirty minutes, to the strains of the "Heidi" song (which Cristian was also glad to sing for us, upon request). Instead of a greasy spoon restaurant and a convenience store mostly full of snack food, Heidiland features a "self-service" restaurant and a small grocery store. The restaurant contains several buffet-style displays of various kinds of food--breads and pastries, soups, salad bar, fresh fruit, hot drinks--and the grocery carries actual groceries as well as prepared sandwiches and junk food. After eating another picnic-style lunch, the girls and I also walked out onto a bridge Cristian had pointed out to us which spans the Rhine River here where it is fairly narrow. The water is a very powdery blue, containing lots of minerals from the glacial run-off.

When we left Heidiland, we began a long driving climb into the mountains on our way to St Moritz, going through the Julier Pass to reach it. The Rhine was often far below us in the bottom of the valley, and the hillsides were covered with trees except in places where the cliffside had sheared off, leaving almost vertical drops. There were lots of tunnels on the road, and we began to see square-wire fencing and wooden triangles and fences, all of which are there to prevent avalanches and earth slides. At one point traffic was backed up as an old woman herded cows down the road!

We stopped on the shores of Lake Marmorera, where I took a photo of this restaurant, closed on Sunday. 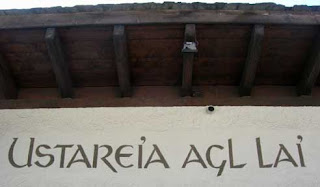 The word ustareia is the Rumantsch word for restaurant. AGL LAI' means on the lake, I think. Rumantsch is yet another language derived from Latin, with only 60,000 or so speakers. It is an official language of Switzerland, and the speakers live in a canton (state) called the Graubünden. St Moritz is in the Rumantsch area. Apparently, there are 5 variants of the language we might call "natural" (spoken in different valleys) and a sixth which is kind of an artificially created generic version.

We arrived in St Moritz later in the afternoon and got checked into the Hotel Bären, an older hotel with a lot of character. This is the view from my balcony. 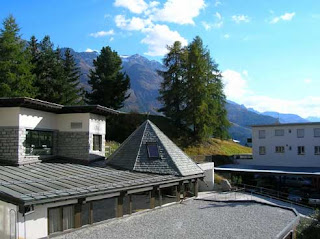 As you can see, I looked out over the hotel, but could also see into the mountains. The town is named for St Mauritius (spelling?) who lived around 300 CE. Cristian took us on a walking tour of the town's center. We passed by the old school (a photo of which I posted yesterday) and the "leaning tower" of St Moritz. There used to be a church attached to this tower, and the tower only began to lean when the church was torn down. It was supported in order to keep the lean from getting worse. 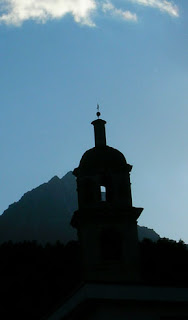 We also went down past a rather marvelous bakery and conditorei (spelled with a K in "normal" German) called Hanselmann's and to an elevated walkway that comes out over the shore of the lake. As we passed some of the expensive shops, Cristian, perhaps joking, told us that visitors buy things in St Moritz, paying twice as much as they would in their hometown, just so they can say they bought it in St Moritz.

Later that evening I had a meal of croissant and oatmeal in my room, then got on the Internet long enough to make the short posting I made on September 23. I also asked the woman at the hotel desk about the Rumantsch saying painted onto the wall above the desk: Minch ün voul dvanter ed üngün no voul esser. She said it means: Everyone wants to become it, but no one wants to be it. It's a kind of riddle. Can you figure it out?
Posted by Cooper Renner at 8:22 AM

Are you absolutely positive that you and your friends did indeed visit Switzerland and not New Glarus, Wisconsin?

Okay. You went to the Real Switzerland. So: is the "Heidiland" you visited the same as "Heidi's Village" in or near Maienfeld? If the answer is 'yes', we are amused. Among our efforts to regale last week's visitors to clusterflock with examples of ersatz Swiss culture was a post featuring a link to the Maienfeld "Heidi's Village" website.