Today has been a take-it-easy day. I slept 10 or 11 hours and didn't get up till almost 9. Even after so many hours in bed, it seems that the nicest minutes of all are still those between the buzzings of the snooze alarm. I had oatmeal and tea for breakfast, two teacups full of each. The oatmeal is Jordans Quick & Creamy Porridge, bought yesterday at Wembley Market in town. I fix it in the room with the electric kettle. After breakfast I took a short walk around the grounds and did a few exercises in the fitness center before cleaning up. Then I sat in the lobby and did a little bit of Internet work.

I went into Valletta about 11 and saw, happily, that Wembley was open. Unfortunately I decided not to stop in there until I was on my way back out of the city and by then it was closed. Only open 3 hours on Sunday. Rats. I had part one of my lunch at Cafe Deux Baronnes, tucked at the end of a short street that dead-ends into an entrance to the Saluting Battery at the Upper Barrakka Gardens. Deux Baronnes' tables are all outside and overlook the Grand Harbour (British spelling). While I was enjoying my fresh, hot fries and pot of tea, the cannons at the Battery were fired (noon daily)--it's quite a "concussion" they make. After eating I went up to Upper Barrakka, one of my favorite places in Valletta, and spent 30 minutes or so working on a sketch of part of the gardens. Then I roamed over to the arts centre and wandered several of their galleries. The current exhibit contains a lot of prints, etchings and pencil work, but also paintings, so I couldn't really detect any particular theme. There were works on display by artists whom I'd never heard of, as well as those of Wyndham Lewis, Augustus John, and Lucian Freud. Also a series of etchings by David Hockney, from the '60s, which reminded me very much of Edward Gorey's work. Perhaps as many as ten pieces were by Madame Veronde, whom I'm totally ignorant of.

I then wandered more or less northward, passing down part of Merchants Street, which was completely under reconstruction on my first trip here, open in 2010, and now "embellished" down the center with bench squares which have planters in the center and, about once a block, the outdoor dining area of a restaurant. It's a great improvement on the dust and noise of '07. I walked past St John's Co-Cathedral and down St John Street to stop in at Hollywood Grocery to visit with my old friends from my previous visits. But it was closed. I don't know if it's always closed on Sunday or if it too shut down at 1. I'll check in again in a day or two. Since both it and Wembley were shut, my chances of finding some ham or turkey slices for part two of lunch were gone so I got a big croissant at a patisserie near the gates, and an apple for later. I also took this photo of the construction right inside the gates. That's St Catherine's tiny dome to the left in the photo, and the girders of (I think) the new Parliament building on the right. In the bottom right corner you might be able to make out a pylon looking drawing which I think may be part of the new open gate for the city. 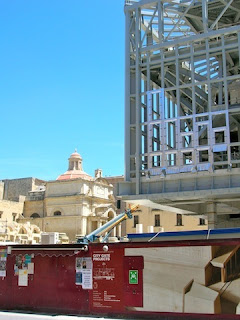 I thought you might also want to see a photo of the hotel I'm staying at, so here it is: 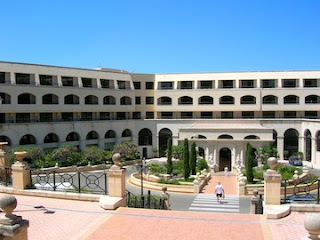 And here is what you see when you step out the front entrance of the hotel, the Msida Bastion Gardens, which date back to 1806, according to the signs. (NOTE: I was wrong. Misreading signs again, an easy thing to do in Malta. The Msida Bastion Gardens are farther down the street. It's a good thing I don't have to drive here, or I would be perpetually lost. I canNOT figure out their directional signs.) The hotel has a Floriana address, and Msida is yet another of the small towns along Marsamxett Harbour, so maybe the Msida Garden name goes back to an earlier designation connected to the fortifications.

I hope all of you in the U.S. are having a wonderful Mother's Day. It's still morning for all of you as I write, though it's almost 4 in the afternoon here.
Posted by Cooper Renner at 6:54 AM