The signs were good this morning: light wind, bright sun, a bit of warmth in the air. But it got trickier by 10:30, when the wind was up and there was more chill around. Better than most days so far, though.

I decided to visit Sliema again. I made the harbor walk once more, going down from the hotel and around the base of the walls to the ferry landing. Along the way I passed another walker who was going almost as fast as I was. Not long after I passed him, he sped up and caught up with me. He wanted to talk. He told me he would be 80 later this year and walks a lot. He had already walked in from Hamrun, a town or so away, this morning.

Once I got to Sliema, I headed for Simply Foods at the mall. My visit was great. Again a croissant, a donut and a cup of tea--and this time I actually put some of the milk into the tea to cool it down a bit. I finished reading the DH Lawrence story "The Man who Loved Islands" while I was there, and toward the end started feeling really giddy, with a bit of a headache. It might have been sugar from the donut, but more likely those several minutes when I felt weirdest were when the weather was turning. When I entered the mall at 9:40 or so, it was quite lovely out. When I left, less than an hour later, it was chilly and very blowsy. And I was quite hungry, even though I'd already had two tea-cups-full (about 6 ounces each) of oatmeal for breakfast and my mid-morning tea. So I checked out the Chain supermarket again to see if their deli offered better meat than Tower. And it does! I got about 6 ounces of nice, oven-baked turkey, freshly sliced for me; some chips; bottled water and a single-serving container of applesauce. Real applesauce, not baby food applesauce. Amazing. They didn't, however, have V8 or a single serving container of tomato juice. Still, I think you all will definitely have to add Chain to your grocery visits when you come to Malta. And the employees are nicer than the folks at Wembley too!

I took my little picnic outside and had a 10:30 lunch in the chilly Sliema wind, on a bench overlooking the harbor. Afterward, I stopped by the bookstore, to see if my old friend the clerk was on duty (no), then returned via ferry to Valletta.

I had a bit of time before the 12:30 performance at St James Cavalier so I went over to Upper Barrakka. It was packed! Once again there were two cruise ships docked down below at the Valletta Waterfront (which is actually, I think, in Floriana) as well as a small ship in between them--perhaps one of those specialty lines with a small number of passengers. Look carefully, just to the left of the watchtower (called a vedette, apparently), and I think you can make it out in the photo. 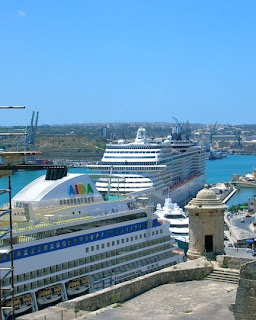 The ship in front, the Bella, looks like a newer ship, going for the swankier, glitzier crowd, judging from the open areas on the upper decks and some of the glassed-in areas. But the MSC ship at the back looks to be a good bit larger. It is the Splendora, which I've already seen here once, so it must be making the 7-day circuit this summer.

Back at St James Cavalier, I listened to a performance by soprano (and U of Malta student) Marouska Attard (there's a town named Attard in the middle of the island) and pianist Christine Zerafa. Marouska said in her introduction that the performance was part of her requirements for her degree. This show also included a print-out with information on the vocal selections, so that may have been a requirement as well. It was very nice to receive. I drew of course, and as usual started before the performers came out. At first I thought I might just draw the piano and the music stand, but then decided to add the women in too. Because of the way I had begun, however, Marouska's head didn't get included! 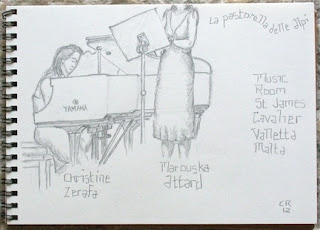 I showed the drawing to the two women after the show, and we laughed about the missing head. They seemed pleased with the drawing and I let them have it. Hopefully it's not in File 13 at St James Cavalier yet!

I think I've forgotten to mention two of my other acquaintances from this trip. One is one of the drivers from the hotel here--in fact he may be the one taking me to the airport in the morning. We've talked a couple of times about the cool sites in Malta and the places I've seen in Malta, and he told me this morning that I should buy an apartment and move to Malta. He said he was speaking not from his head, but from his heart. So I guess he's enjoyed our discussions.

The other new friend is the man who operates the parking lot spread on both sides of the street that leads to Msida Bastion Historic Garden. We've said hi as I've passed him on my morning walks some days, and he told me one day that he calls the woman at the Garden Mad Mary because her license tag begins MAD and her name is Mary. One morning when I talked to him he was having a Cisk beer and I told him that, as I walked up and he was having a swig, it looked from a distance like he was holding a periscope up to his eye! He thought that was funny.

I headed over to Hastings Garden for my last can of tuna and bottle of applesauce. It seems to me that there is a section of the garden now that wasn't open in 2010. Certainly I don't remember seeing everything I saw today. There were four young bicyclists--men in their 20s or 30s, I guess--lying out on the walls catching some sun and a nap apparently. I asked them if they weren't afraid of the wind blowing them off, but they just laughed. I took this photo of them as I was leaving. The one who is nearest the edge had been a lot nearer the edge before I got the camera ready. I would guess that it's at least a 150-foot drop from that edge! I certainly wouldn't want to have walked as close as he did. 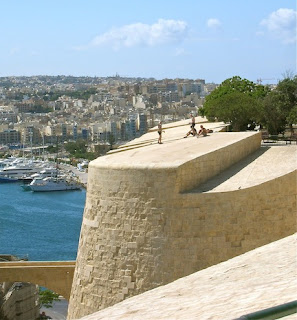 I also took this photo which might give you an idea of the size and complexity of the walls here, how they can be almost labyrinth-like, I suppose to trap invading soldiers. The cars at the bottom should give you some sense of scale. 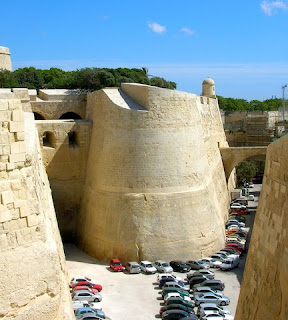 And what is this? I absolutely do not recall ever seeing this "hidden garden" before. Is it a private pool and club? Does it belong to the Hotel Phoenicia, which is quite a way up the hill from here? It seems to be across the street from the Grand Hotel, and hidden away from it by the walls. That's the Grand Hotel (where I'm staying) in the upper right beyond the trees. 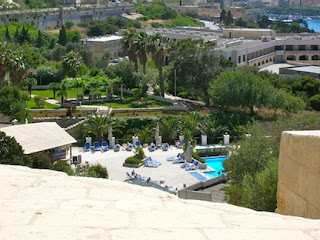 I went by Hollywood Confectionary and said goodbye to my friend there. She said that she and her husband go to London twice a year, in January and August, but they won't go in August this year because of the Olympics. Maybe Bristol. She said they visited Bristol in January and really liked it.

And I closed out my last day in Valletta with some fries and a soft-serve ice cream at McDonalds. I've had soft-serve vanilla almost every day since getting on the ship on Florida, and it's something I normally only have when I go to Jason's Deli. But I figure it's an easy way to get a bit of dairy in my diet and, besides, with my metabolism gunning all day every day I can put the fat to use as well! Now it's time to see if the hotel internet is going to be swamped with users, or if I can get this easily posted.
Posted by Cooper Renner at 8:32 AM