May 25, 2012: Kew Gardens and the Natural History Museum (and a bit of shopping)

When I was a kid, there was a house on several acres out on the far southern end of Oak Cliff, Texas, where--it was claimed--you could hear crazy men screaming in the trees at night. Well, actually, the owners had peacocks and that was what you heard. Not as good a story, to be sure. Today at Kew Gardens I heard peacocks screaming any number of times, and they do indeed sound human.

Kew Gardens is somewhere on the southwest side of the London metropolitan area, I think. At least the train seems to be going that way. I visited here in 2010, on the last Saturday in May--an ugly ugly day, wet and cold, but it was the day I had to go because Chris Watson was debuting his sound installation "Whispering in the Leaves" that day in the Tropical Palm House on the garden grounds. Watson records sound from the natural and human world and fashions 'compositions' from them. For the Palm House he created two 20-minute pieces, one of the rain forest waking up in the morning, the other for the forest settling into night. It was great to be there watching as he "played" his computer recordings to give us the performance.

But the weather was awful and not at all conducive to wandering the extensive grounds. So today I went back, in bright and warm weather, though the wind was up--reminiscent of Malta! (I just heard a few minutes ago that it was 24 C. today, about 75 degrees, not quite as warm as yesterday, but still shirt-sleeve weather.)

After I got off the train (about a 30 minute ride?) and before I went into the Gardens, I stopped off in Starbucks for tea and a snack. The plainest thing I could get was a chocolate chip shortbread cookie, but they had China green tips tea, which I don't think I've had since leaving the states. Will it surprise you that standing directly in line behind me, practically on my heels, was a clueless dad holding a sometimes-shrieking toddler boy? And then after I went to sit down, dad, mom and shrieker came and sat at a table just a few feet away from me. The parents were almost more irritating than the child, as they cooed and swooned over him. I got up and moved to another table. I don't envy his teachers in a few years...!

But then on to the Gardens.

Right now at Kew an artist named David Nash is preparing a new exhibition for the grounds which won't open for a few more weeks. But we could see the "Wood Quarry" where the work is being done. He's utilizing wood from at least one enormous dead tree in the garden to make new abstract sculptures. Meanwhile there are quite a few of his other sculptures on the grounds, mostly of bronze painted black, and suggestive of burnt tree trunks. (One of the sculptures is in fact a charred trunk.) This one is called "King and Queen 1"--the 'king' looks like a giraffe to me. 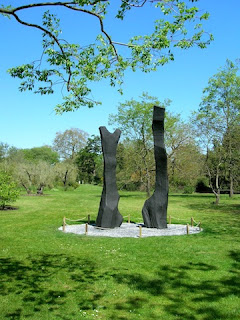 Another new feature to the Gardens is the Treetop Walkway. I'd guess it's about 40 or 50 feet high and it allows you to walk around up there in the trees and look down and out across the park below you. Here's a shot from not quite all the way down, looking up at the central 'tower'. 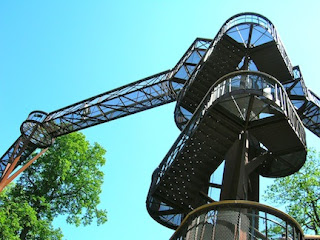 The weather was lovely, so the park was quite hopping, including with school field trips. I guess even in England when spring comes on strong, the teachers want to get the kids out of the building. They seemed to be well-corralled so I was pleased about that.

How about a cottage like this one? It's called Queen Charlotte's, but I'm not sure off the top of my head which king she belongs to. 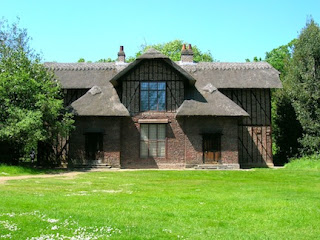 At first I thought they were re-thatching the roof, but there is chicken-wire covering both thatched and unthatched sections so maybe it's just kept in that condition for the time being.

And this is the Monkey Puzzle tree. Quite a big tree. The marker says the tree is actually a Chile Pine and grows in the temperate rain forests of Chile. I can't remember now if it's the Monkey Puzzle Tree or one of the others that can live 1000 years in its natural environment. 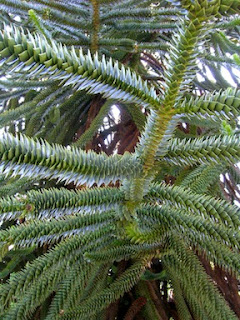 Before leaving the Gardens, I had what I intended to be part one of my lunch, though it ended up being all of it. You'll love what I had: a nice-sized plate of mashed potatoes (they were being served with sausage, and I asked if I could have just potatoes alone), an apple, and of course a cup of tea. (It felt nourishing at the time, especially as I was planning on adding meat to it later.)

I had a day-pass for the subway, which had "OFF-PEAK" printed on it, so I was afraid that if I waited too late into the afternoon I would hit a time period when it wouldn't be any good. So I left the gardens about 2 and took the subway back to the stop near the Natural History Museum which I hadn't visited before. It's a gigantic building that looks like a massive cathedral. 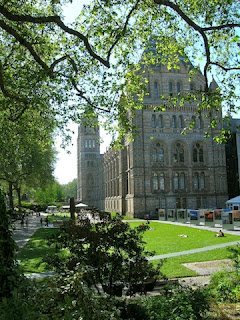 Inside are fossilized bones of dinosaurs, and casts of fossilized bones, a few of which were actually found by a girl and her brother in the early 1800s in England, when no one was sure what they were. Quite a few marine dinosaurs are there--ichthyosaurs and plesiosaurs, etc., which look almost like a weird mix of dolphin and crocodile. It was interesting to me to see the explanatory cards for some of the skeletons saying that they were bought for the museum at various points more than 150 years ago. One, I remember, said the history of the fossil was unknown but that it had been in the museum since 1832! An astonishing idea, to think that the fossil had been there since Andrew Jackson's presidency!

I didn't wander the entire place, partly because I was getting ready for more food, and partly because some of the displays are things I just don't care as much about. Dinosaurs, however, are still interesting to me. I also looked at some of the insect displays and the mammals and reptiles. Did you know there's a frog has something on its legs that looks almost like hair? Neither did I!

After finishing up here, I headed off on a longish walk--a couple of miles, I guess--to one of the Marks & Spencer locations on Oxford Street for an early supper. I had to go north to Hyde Park, cross Hyde Park heading northeast, then go several blocks east on Oxford Street--perhaps the busiest shopping street in London--to reach the store. Since I'd had a big serving of potatoes as well as an apple at lunch, supper was brown sugar baked ham, a croissant, some potato chips, and a cup of tea. I studied my London map while eating and decided that I might want to see the Charles Dickens Museum tomorrow and maybe visit a used bookstore or two. Sunday will be a kind of catch-as-catch-can day, since so many stores will be closed. (I'll need to get some tuna tomorrow, probably, to eat on Sunday.) So Sunday might be a good day for the two Tate museums and maybe a riverboat ride on the Thames from the Tate Britain to the Tate Modern.

After supper I browsed in Marks & Spencer women's department looking at scarves (birthday gift) and getting ideas, then wandered into Selfridges (and fairly quickly wandered out again--it seemed too hectic and trendy for me), and then went to Debenhams to look for scarves again. Here I found one that I thought would be appropriate. So now I've bought birthday gifts for all three sisters from the European adventure 2012. (All my sisters have summer birthdays.)

Ta-ta for now. Oh, wait! I forgot to tell y'all about the swank hotel bathroom floor. It was warm last night, which I thought was a little odd. Then this morning it was actually hot--hotter than body temperature in one spot--and I wondered if the hotel's hot water pipes run under the floor here since I'm in the basement. As I was leaving the hotel, I saw one of the cleaning women and I asked her about it. The bathroom floor is actually heated! And if I raise the temperature of the AC, meaning I want the room warmer, the bathroom floor gets warmer too! What's a Cockrell Hill boy to think?
Posted by Cooper Renner at 12:55 PM

Which house on the far southern end of Oak Cliff might you be referring to?