I'm so tired of being cold! Today for the first time since the cruise I actually had to wear both windbreakers for part of the day (and will probably have to again if I go out in a while). Cloudy, a cold wind, and a high of allegedly 21 (roughly 70) by 2:45. Good grief! It's only a month to summer, and we can't hit 75? Or 80? Will I ever feel 80 degrees again? I know some of you complain about being hot for four months a year. I can't give you any sympathy because I'm cold for eight months a year. And it looks like 2012 is going to be cold year-round. I got onto the ship 22 days ago, and since then it's been genuinely warm only two days--May 11 in Pisa, and May 12, the day I flew here. Friday was very nice, but it wasn't truly warm, just sunny and almost calm. I can hear the wind whining around the hotel even as I type at 3:40 p.m.

Sunday is a boring day in Malta at best--at best meaning "when it's warm and sunny". On an ugly day like today, it's interminable. I couldn't even go to Cafe Deux Baronnes for chips and tea because they shut down early--due to the wind, I suppose. This morning I saw outdoor cafes with their heat-towers burning, and just a few minutes ago the pastizzeria where almost everyone sits outside had almost everyone inside because of the weather. I'm signing off, and you can be my witnesses: no more transatlantic voyages and no more Mays in Europe. I'm tired of going back to February weather when Texas has only just begun to warm up. My trip of 2007 must have been blessed by the weather gods, because 2010 and now 2012 have been much too chilly almost every single day in every location. I had hoped that Debbie would bring good weather with her on this trip, but I guess she did the opposite. The only email I've had from her since I left the ship was from when she was on Mykonos. She said it was 60 degrees and raining. At least it didn't rain today (so far).

I visited the National Museum of Archaeology, which has spruced up its exhibits since 2010 and is looking much nicer. It's always a pleasure to see the Sleeping Goddess, though I really wish they would up the lighting in her exhibit room. Yes, she's 5000 years old or so, but I don't think a little more light is going to wear her away. She is a sculpture, after all, not a painting! There are still details in the displays that need tending to, things not labeled easily enough to figure out and so forth, but overall it's a nice museum with a fine overview of Malta's impressive prehistory. I guess we'll never know who these people were who built the ancient temples and made the ancient pottery and sculptures, but it's cool to see what they left behind.

There's a special exhibit upstairs too at the moment. On one of my earlier trips I got to see a selection from the traveling exhibit of the Chinese terra cotta soldiers. This time it's damascene work from the Khalili family collection. Damascene, in case you (like I) didn't know, is gold inlay work on iron. There are amazing pieces in this show: from cigarette-cases and matchboxes and compacts, to vases and urns from quite small to quite large, to "caskets" of various shapes and sizes (one of which is large enough to hold several bodies), to engraved weapons. Amazing detail and flourish.

Needless to say I wasn't out snapping photos on an ugly day like today, so I'll give you a few from the cruise when I wasn't easily able to post. This one comes from our sixth or seventh day at sea, when we were near the Azores and saw a few other boats. 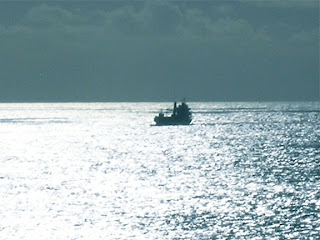 And this is from Gibraltar, where the government is going to help you find some diversion! (We would say detour of course. They use diversion here in Malta as well.) 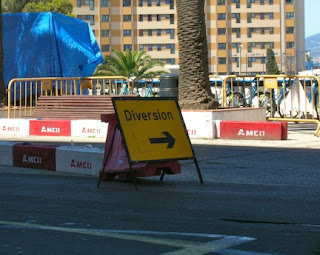 And this shows some lovely flowers, and a bit of architecture, from the Castillo of Saint Barbara in Alicante. It was sunny, and almost warm, that afternoon! 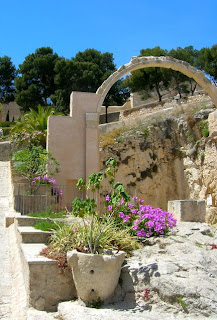 And yesterday I forgot to mention that, on going into the Upper Barrakka Gardens, I saw two men leaving, one of whom said to the other something about "that ship losing power the other day." And I wondered if they were talking about the Crown Princess and, if so, how wide the word has spread since we "made contact" with humanity again.

I hope that all of you, wherever you may be, are enjoying your weather more than I am, and I hope that I will live long enough to feel 80 degrees again.
Posted by Cooper Renner at 7:09 AM