A History Walk in Arctic Weather

If anyone tells you that England in July is pleasant, don't believe him. It can be pleasant, for a few hours at a time, but one mustn't expect it. Take a look, for example, at this duck: 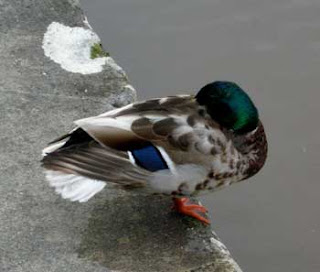 He was huddled in upon himself, head tucked into his back, standing on one foot on the edge of the canal that runs through Chester. It was quite raw this morning in Chester. I could bet you that Chester was as cold as Canada's Northwest Territory, and I'd probably win. Remember: even the tundra thaws out in July! I took a "history hunters" walking tour, which was quite interesting, but some of the time I was absolutely freezing. (And I got a bit of drizzle at a couple of times, but I didn't have to use the umbrella for the second day in a row.)

I think the man who leads this tour is sitting in the catbird seat. He's retired and does this, I suppose, just to supplement his pension. At four to five pounds a head (depending on age), he can make anywhere from 20 to 60 pounds for a tour that lasts 90 minutes or so. Not a bad supplement at all! Do you think I could get something similar going in Marfa? Probably not. According to what I read, Chester gets about 2 million visitors a year.

One of the most interesting facts we learned on the tour was what "The Rows" are. For several blocks in the center of historic Chester, a few blocks running east-west and a few running north-south, there is what constitutes something like the earliest mall in the country. In The Rows there are shops at both street level and at the first floor aboveground level, and the shops aboveground are all connected by aboveground walkways. What's unusual about this is that The Rows go back several hundred years. On the upper floors, closest to the street, there are railings and sloped display areas called stallboards. Behind the stallboards are the walkways, and then the fronts of the stores. This photo shows what is, our guide said, the oldest storefront in England. 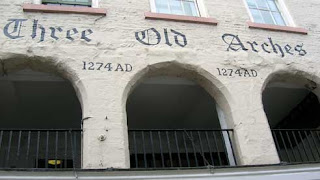 Behind and at the base of the arches are the stallboards, then the walkway, then the enclosed building. The Three Arches are on the north-south section of The Rows where the ceilings are lower (probably older), and the walkways more shadowy. On the east-west axis, the roofs are higher (I think he said they were redone in later times), making the walkways and stallboards brighter and more airy. Along the same street where the Three Arches are (and pretty close to them, I think) was this historical marker, mostly of interest to librarians: 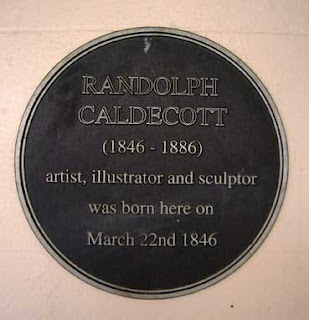 On the other side of the north-south axis and at ground level is the cafe called SpudULike, which I think I mentioned a couple of days ago. I had lunch there again today and went down into their basement (which I didn't know to do on Monday). SpudULike sits on top of a Roman hypocaust--or heating system. A couple of days ago I ran a photo of a reconstructed hypocaust in the Roman Gardens. This is the real thing, in its original location. A fire would have been built somewhere down here, beyond these columns, then the heat from the fire would have come into the space created by these columns, thus heating the floor above. 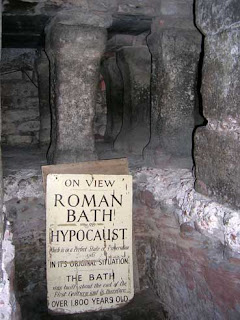 On the east-west axis of The Rows we went into what is now a sofa shop which occupies both street level and aboveground level at its location. It also contains this windowpane, which dates back to the 18th century and contains a graffito written by English author Samuel Johnson, scratched into the glass itself. Maybe one of you has the digital skills to find to enhance the writing and figure out what it says. As well as I can tell, there are three lines, sloping upwards, one towards the top of the photo, one almost in the center, and the third near the bottom. I tried to decipher it, but couldn't--and the guide wouldn't tell us what it said, so it must be a little bit naughty! 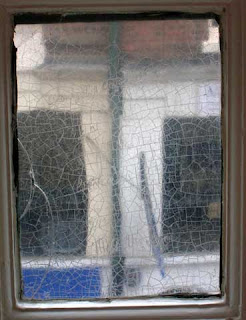 The guide mentioned that there would have been perhaps three days a year when Chester would have had a sort of "open" fair, allowing people from the countryside, who were not guild members, to come into the city and display their wares--which might be cheeses!--on the stallboards, offering them for sale. Otherwise, trade was strictly regulated, and one had to be a guild member to produce items for sale. I asked him when the guild system finally faded away--since, I suppose, most of us associate it with the Middle Ages--and he said that wouldn't have happened until some time after the English Civil War of the 1640s.

After my lunch at SpudULike, I went back to the hotel for a little while to warm up. I changed out of my shorts into long pants (although my legs weren't that cold--it was my upper body) and put my second windbreaker into my pack, so that if I needed to I could add it to the t-shirt, polo shirt and windbreaker I was already wearing. Fortunately, the clouds finally began to break about 2:30. I took a tour of the Chester Cathedral during this time. You have probably seen enough photos of cathedrals by this time, but I will show you one more. This is one of the oldest parts of the cathedral, dating back to about 1100, not long after William the Conqueror and around the time Henry I came to the throne. Most of the cathedral follows the Gothic (isn't that right?) form, with peaked arches coming to a point, but this 900-year-old bit has the old rounded arches format. 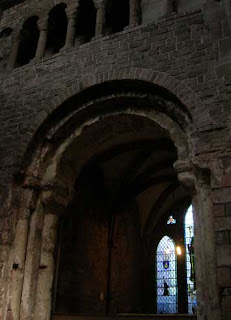 The cathedral is made of red sandstone, which you might be able to tell in this photo, and was first a Benedictine monastery.

By the time I left the cathedral, the sky was actually more blue than not (though the wind still blew and the temperature probably wasn't more than 65). I got a "take away" cup of tea and a newspaper from Starbuck's and went down to the Roman Gardens for a little while to sit in the sun and read. With my back to the sun, and light falling on my dark blue windbreaker, it was actually possible to begin to feel warm. After a while I even took the windbreaker off: it was practically as warm as a nice February afternoon in El Paso! Then I got some food from Marks & Spencer and headed back to the hotel. I did a little yoga, for only about the second or third time while in the British Isles, then showered and washed clothes.

Now it's 7 p.m., the sun is still shining most of the time, and I think I am just about ready to head down to the hotel lobby and connect to the wifi. Don't forget that tomorrow I get on the train and bus for Hay-on-Wye where I don't expect to find wifi. (If I do, that'll be great.) So if you don't see another posting, or get an answer to email, until Sunday night or even Monday (it will probably be almost 5 p.m. before I get back to London on Sunday), don't be surprised.
Posted by Cooper Renner at 11:29 AM