Tate Modern & An Encounter with the Mage

Today I may have made my longest walking day of all; certainly the distance from the hotel to my original destination--the Tate Modern Gallery--is greater than any previous jaunt. I was in no hurry, since nothing opens early and I left the hotel about 9:15. The two obvious routes from the Springfield to the gallery are: 1] the route east-north-east on Bayswater/Oxford Street/New Oxford Street/High Holborn, then cutting south, and 2] the route east-south-east toward Westminster Bridge, then heading north and east along the river, past the London Eye and the Aquarium. I chose route 2, cutting through Hyde Park and snapping this photo, toward the southeastern corner of the park. It's in memory of the cavalrymen who died in the two world wars and, as you can see, takes the form of St. George triumphing over the dragon: 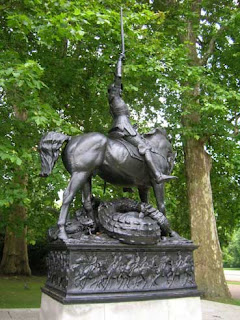 I moseyed on past Buckingham Palace, fairly quiet this morning, and down to the Westminster Abbey snack kiosk for a cup of tea. Then I crossed the Westminster Bridge and headed up the Jubilee Walkway, either created or named in 1977 for Queen Elizabeth II's 25th anniversary on the throne. Along about here it started to sprinkle a bit, and I had to bring out the umbrella: those of you who wear glasses will sympathize with the need to keep those lenses dry! I got my best look yet at the London Eye, the enormous "Ferris wheel" on the bank of the Thames. The "cars" are quite large--each holding up to a dozen people, I'd guess, maybe more; and there must be 20 of them or so. I'm not sure I actually saw the thing move while I was walking toward it, though.

Not too much farther on, I came to this gentleman: at first glance, I thought he was a statue, then I saw that he was barely moving. I dropped some coins into his hat and then prepared to take a photo. He held out his staff, to bless me, I suppose: I don't know if he actually intended to tap me on the head or not, but I managed to avoid the "blow" if so. As I snapped this picture, he was making some kind of gesture, as you can see. It was also while I was here, reaching into my bag for my camera, I think, that I managed to knock my cup of tea over with my umbrella, thus losing what remained of it. The magus may have thought he needed to bless my klutziness out of me:

Then I moved on to the Tate. Those of you who have been reading the Log will recall the Tate Britain Gallery, which features artists specifically from Britain. The Tate Modern features work from all over the world from the last 100 years. Picasso paintings are here; so is work by Monet, Mondrian, Magritte, Braque, de Chirico, Rothko, Rodin and zillions of folks I've never heard of. One is, needless to say, not allowed to take photos here, so all I can do is talk about it. Rodin's The Kiss is here (but it's also elsewhere--apparently there are 3 "real" copies of it); today I actually read enough of the descriptive placard to learn (or relearn?) that the two lovers kissing are supposed to be a couple from Dante's Inferno. One work I particularly enjoyed seeing, by an artist I'd never heard of (Richard Phillips, maybe?) was a portrait of George Harrison. The work is done in charcoal and pencil or chalk, but looks like a photograph of a three-dimensional face done in shaped paper. It's a representation of the long-haired George Harrison of the late '60s and early '70s and is called My Sweet Lord. Another work in the same room, by another artist I'd never heard of (and whose name--maybe Germanic--I cannot now recall) was a very dark work done of black paper. The scene looks like a couple of old-fashioned-looking men--silhouettes, really--taking a walk on a very dark night. It's quite a striking work.

One of Monet's paintings of lilies is here--it's quite a large work, and its size surprised me.

Donald Judd's work in metal is represented here too. Some of you have probably visited the Chinati Foundation in Marfa, Texas, where Judd's work is on permanent display, along with the work of other artists, on the grounds of a de-commissioned military base which he bought a number of years ago. Another sculpture here reminded me of Judd's work in aluminum cubes, but this was by another artist: it was a grouping of cubes made of mirrors, so that the look of the sculpture changes as people move in and around it.

After wandering around, and dodging several groups of students on field trip, I had a lunch of French fries and gunpowder green tea in the gallery cafe.

Not far from the Gallery is the replica of the Globe Theatre of Shakespeare's day. Here is a photo of one side of it: 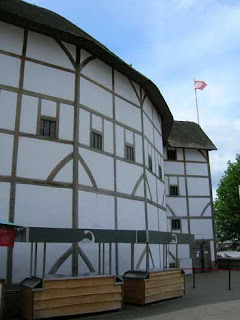 The Globe is also on the south bank of the Thames. Going north across the river right near the Tate Modern is a pedestrian bridge, which looks like it might be made of aluminum, and which heads one straight at St Paul's Cathedral. I stopped midway and looked east to take this photo of the "real" London Bridge. The close, low bridge is the Southwark Bridge, I think; the London Bridge is the two joined towers, farther off. 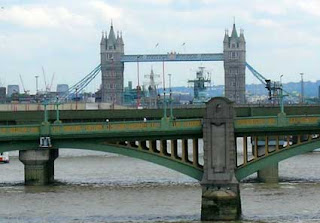 After I finished crossing the bridge and continued on toward the cathedral, I noticed that the temporary appearance of the sun was casting a fairly sharp shadow, so I snapped this, your silly photo of the day, as I walked: 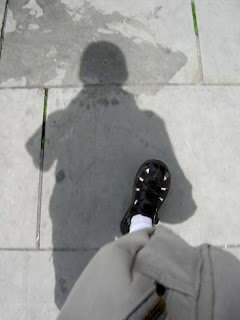 I first took a photo of the cathedral from a good distance out, but this one was taken when I was fairly close. 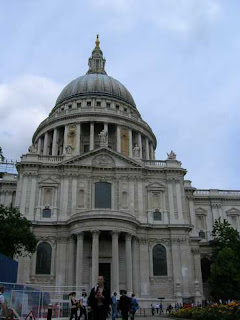 I didn't go inside, however; I've seen plenty of cathedrals on this trip and need some things left to see for the first time if I return to London, with company, in the future. Don't I?

What else have I not seen? The Tower of London. The London Bridge, close-up. Sir John Soames's Museum (which Lou Ann likes, and which I tried to spot on my walk today, though somehow I missed it). Southward Cathedral (another recommendation of Lou Ann). Sir Francis Drake's The Golden Hinde, if it's still here. I haven't seen a play. I haven't been inside Parliament. So there's plenty of reason to return to London, if one of you wants to come along!

I returned to the hotel fairly early in the afternoon, between three and three-thirty, after short visits to Foyle's Book Store and HMV Music Store (I bought nothing--don't worry!) and a trip into Marks & Spencer for a Devon scone (which I ate walking back), a bagel (for part of my supper), and a M&S cola (because they don't sell Coca-Cola). Then I went to Starbuck's and worked on email and the Travel Log for Saturday and Sunday. After going back to the hotel again to put up the laptop and get my "light supper" items (can of tuna, bagel, cola), I went into Kensington Gardens and had my picnic. Then I strolled for a while, including a walk past the "In Memory of Speke" obelisk I mentioned in yesterday's posting. I memorized the subtitle on the base--"Victoria Nyanza and the Nile 1864"--and also noticed what I had not noticed yesterday: a metal plaque mounted on the ground explaining about Speke and the monument. Speke and Richard Burton (the 19th century writer and explorer, not the Welsh actor) discovered Lake Victoria in 1858, and then Speke--along with another explorer (named Grant, maybe?)--"confirmed", whatever exactly that means in this context, that Lake Victoria was the source of the Nile in 1862. He died two years later of a self-inflicted accidental gunshot.

Despite the appearance of the "enhanced" photo of London Bridge and my shadow photo, the day was not mostly sunny, though this evening has been better. We have been mostly gray, with flashes of sunlight from time to time, and with longer periods when you could see where the sun was, but with clouds still obscuring it. Still, it wasn't cold like Chester, though it had gotten just a bit nippy by 5:30 or so; and it didn't rain much at all, like Wales and Chester and Ireland and. . . So it wasn't a bad day weather-wise at all. And I knew you'd be disappointed if I didn't say something at least about the weather.
Posted by Cooper Renner at 5:03 AM

I've an enjoyable bio of Sir Richard Burton that I recommend; I'll track it down and email you its title and author.

I've seen Burton's grave. It's a tent. He said he wanted to be buried in a tent, so his wife had a tent monument built.

About that bridge. It's the Millennium Bridge, also known as the "wibbly wobbly" bridge for a time. It was built for the millennium, but it swayed so much it was shut down the first day until engineers could fix it.

I am so bummed out that you didn't see a play. There's no place like London for the theatre. That's pretty much the only reason I go there now.