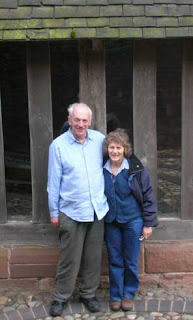 Today I had the pleasure to meet and visit with Alan and Griselda Garner. Griselda, like yours truly, is a retired librarian. Alan, as many of you know, is the noted author of such books as The Owl Service (which won the Carnegie Medal for 1967), The Stone Book Quartet, and Strandloper. I first encountered Alan's books as a teenager, when his books to date were all classified as children's or teenagers' books. Over the past several years I've reread those novels as well as reading his more recent books for adults and have been amazed at the power of his language and his enormous skill. He is not at all well-known in the U.S., though his books have been published and re-published here, and he is, I feel sure, one of the authors people will still be reading and studying in a century or more, when our "bestsellers" are long forgotten.

I left Chester about 9:20 on the train to Crewe, and from Crewe took another train over to Goostrey in (or near?) which the Garners live. Alan met me at the station, and we headed off to their home, a bit of which you can see in the photo above. They live in a quite a remarkable place, where they have found the evidence--weapon points, pottery sherds, seals--for habitation going back thousands of years. Both Alan and Griselda, whom I met when we got to the house, are fascinated with archaeology, know a great deal, and are involved in activities in their neck of the woods to make sure that the evidence of the past gets preserved and understood. Over the past few years, they have been going through all the hurdles to get their house and land bequeathed to the public, more or less, as an English heritage site. They have lived here for 50 years, since before Alan's first book, The Weirdstone of Brisingamen, was published. (I learned today that Brisingamen is pronounced briSINGamen--I've been mispronouncing it for decades!) Alderley Edge, where Alan grew up and which figures in Weirdstone and its sequel The Moon of Gomrath, is only 6 miles away.

Here's a photo of the kitchen, with Griselda barely visible on the right side. 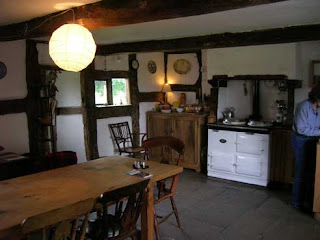 This part of their house is something like 600 years old and was once a manor house. The ceilings are low and the beams are large. The house can't be precisely dated, but one of the newer beams which replaced an earlier beam has been dated back to the 16th century! If you look carefully in the photo, a bit above and to the right of the center, you will see a platter hanging on the wall--that is a plate from a dinner service, the floral pattern of which can be rearranged to form an owl. The Owl Service. Here is a close-up. 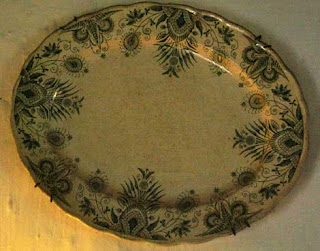 The book of that title is set in Wales and, in a certain sense, re-enacts an episode of Welsh mythology but in the present time. It's a powerful and beautifully written work which moves forward almost completely through the conversation of the characters. It is arguably Alan's first masterpiece, published when he was only 32 or 33.

We sat here in the kitchen, had tea and cookies, and visited. Though Griselda is retired, she and Alan are both involved in educational activities with local school children, teaching them about the past through the remains which have been found right there on their land. Then, while Griselda went upstairs to get some work done, Alan gave me a tour of the house. He showed me, in his study, the chair in which he sat while writing each of his books. His study is full of books, of course, but so are other rooms of the house.

The second part of the house, the "new" section, dates back "only" to the early Tudor period, almost 500 years ago. This part of the house was slated to be destroyed, several miles away, for a road expansion. Working with a young architect, the Garners were able to get this house taken apart, bit by bit, brought to their property and re-assembled. It is joined to the earlier house by a new section featuring a wall that is almost entirely windows, overlooking a small garden with recirculating water. The picture of them at the head of this entry shows them against one outer wall of this section of the house, perpendicular to the window wall. In this photo, they are standing at the same point, but I didn't zoom in, so that you can see almost to the peak of the roof behind them. 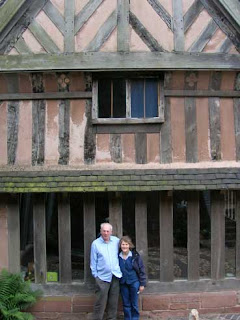 This part of the house includes, in between two large rooms, a sort of heater room, where a fire could have been made on the floor in the past, or in a large metal basin nowadays, to heat the rooms to both side. The chimney which zooms up above this heating area to a height of 27 feet, narrowing as it goes up. 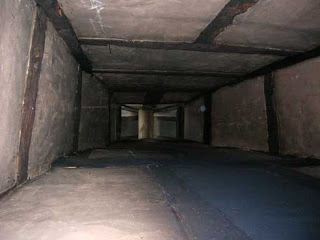 They also have an "educational" are in this part of the house, where students can examine pottery sherds going back about 500 years, found on the grounds, and occasionally even discover that one piece matches the style of another, already dated. Alan also has here his grandfather's smithy tools, which figure in The Stone Book Quartet. And here is a photo of the actual stone book, a piece of stone shaped to look like a book, with spine and decorated cover, from which an inset cross has been lost. 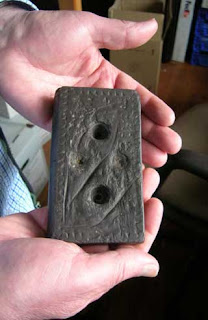 We left the house and went to Alderley Edge, owned by the National Trust. This area contains place after place which Alan used in his first two books--Goldenstone, the Iron Gates, Saddlebole, the hollow way where the wizard met the farmer whose horse he needed. We went up to a site which archaeologists from Manchester University are examining at the moment. Today an archaeologist from Cambridge, a friend of Alan and Griselda, was also there to look at what is being done. He is an expert in ancient mining, and this is an area where both quarrying and mining have been done over the centuries. At one crack in the rock bedding, Alan pointed out the opening into the mines which he used in Weirdstone for the svarts' entrance and exit. The last time Alan and Griselda were there, she found a piece of a flint weapon point which rain had exposed. While wandering here at Alderley Edge, we had our picnic lunch on Goldenstone.

About 3:30 we headed back to the house for another bit of tea and a cookie, before it was time to get me to the train station for the 4:36 train back to Crewe. Alan and Griselda were also expecting the Cambridge archaeologist to come by for a bit of food, before his five hour drive back to Cambridge. This photo shows the Garners in front of another wall of the Tudor part of the house, around the corner from the earlier photos. 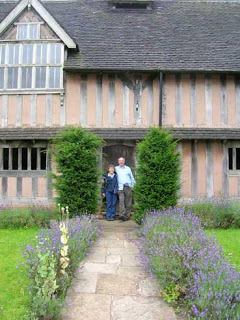 Then Alan and I set off, back to the train station, while Griselda stayed behind in case their friend showed up early. Alan and I chatted at the station until the train stopped briefly to pick me and one or two others up. And then I was off with Arriva, and he was off to home. I hope they enjoyed the day as much as I did, and I do indeed hope they know how much I appreciate their taking the time to let this American interrupt their normal schedule.
Posted by Cooper Renner at 12:37 PM

Oh, I am so happy you visited with the Garners.

And the photograph of the floral-patterned platter is priceless.

("She wanted to be flowers, but they made her owls." I'm sure I misquote.)

Delightful, if not for simply the recognition of a word pronunciation. One wonders how many titles and proper names we have all done that too in our time.

More seriously, the house looks fantastic. Thanks for sharing.

I am now going to reread some of my (and your) favorite Garner books, Renner. In fact, I reread the first half dozen chapters of The Owl Service last night. Damn, it's good.

(As I recall, you are less wild about Thursbitch than, say, Strandloper or The Stone Book Quartet, yes? Still and all, I do want to read it.)