Today we took the RTD (light rail) to downtown Denver. The Lincoln station, nearest my niece's house, is the "end of the line," from which we headed into Union Station on what is, I think, the western edge of downtown. As we rode the shuttle bus from the station toward the eastern side of downtown, we saw banners for "Tattered Cover Book Store" out the bus window. So either it hasn't entirely vanished downtown, or it has been revived following its demise. It is not as large as the TC I remember from the '90s, but does have some titles which don't usually show up in the chains. Even so, it's sad that it's had to downsize.

One of our stops was the Denver Art Museum, which sits just a few blocks from the capitol building and quite close to the downtown library. We visited only the main building, which features strangely canted walls and roofs, so much so that people have apparently become disoriented inside and had to leave. There's a strong modern and contemporary art collection, including a couple of small Picassos and Matisses, a couple of Braques, and a really lovely landscape by Max Ernst, dominated by dark green and blue-green tones. One truly large canvas looks, from a distance, almost like a topographical map. Closer, one sees that the 'lines' are actually words. There is no painting, per se, in the painting: the artist (whose name was unfamiliar to me and which I cannot remember) has written all over the canvas, shaping the flow of the words to create an image that sort of resembles Italy turned on its side, with the Mediterranean Sea above and below it.

Outside, underneath one of the jutting walls, 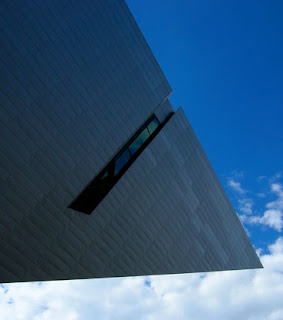 is an enormous, whimsical whisk broom and dust pan: 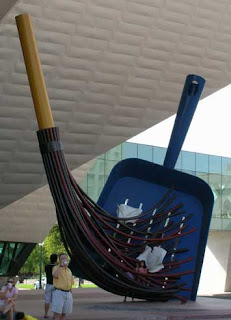 Don't ask me who the dork drinking water is! In this second shot, you can find my niece, nephew-in-law, great-niece and aunt. 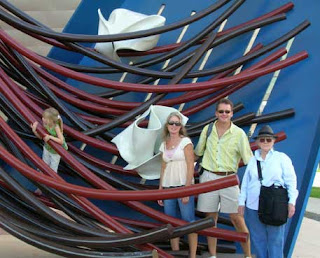 The museum also features Oceanic and African art, a sculpture deck with some of Donald Judd's milled aluminum cubes, and a Western American collection (and who knows what else in the second building, which we didn't visit).

The Denver capitol building has actual gold plates on the roof of the dome, which you can see glinting in the sunlight here: 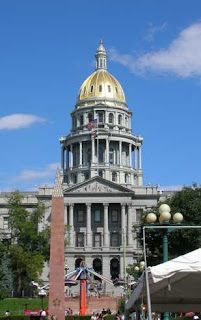 This weekend is also the weekend of "A Taste of Colorado," a carnival, street fair and food-tasting celebration occupying several blocks of downtown. My great-niece (5 years old) won this enormous stuffed unicorn, substantially larger than she is, at one of the booths: she is a good shot with a ball! 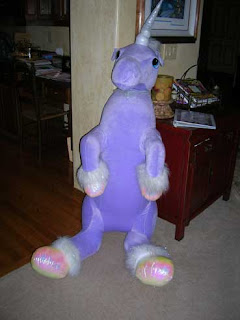 Posted by Cooper Renner at 7:57 PM

That unicorn looks cute and cuddly I wish that I had one.