The Last Full Day of the Trip

Friday was the last full day of the trip, since we had to leave for the airport at 7:45 Saturday morning. The distance from Lungern to Lucerne (Luzern in German) isn't great, so we had plenty of time for a stop to see the Lucerne Lion before heading into the center of the old town by 9:30.

The Lion commemorates the deaths of some Swiss soldiers. You can check Wikipedia for details: I believe the soldiers were mercenaries working for French king Louis XVI, but I may be remembering wrong. As Cristian told us, the artist who designed the Lion, carved into a starkly sloped cliffside overlooking a little pond, died before he was able to do the carving but after the design had been approved. The leaders of Lucerne hired another artist, but insisted he use the dead artist's design. Angry at not being able to create his own work, the second artist shaped the nook in which the Lion rests so that it resembles the outline of a pig! Look carefully at the upper left for the pig's ear, and at the lower left for his snout. After snapping our photos here, we got back on the bus and reached the center of Lucerne by 9:30. There the bus let us off right near where the river flows out of the lake and right in front of Bucherer Jewelry store. Bucherer provided map/tourist packets for all of us, including a voucher for a free commemorative spoon. As Cristian pointed out, we had to go upstairs to the rear of the store to retrieve the spoon, Bucherer's ploy to get us deep inside, among their wares, which include stuffed animals and various souvenirs as well as jewelry and watches. Bucherer also kindly allows bus tourists to use their restrooms!

After a brief stroll in the streets and a morning snack at Migros, we met Cristian back in front of Bucherer for a 45-minute historical tour of old Lucerne. First up was the Kapell-Brücke--the Chapel Bridge. In the past the bridge came right up to the church from which it takes its name, but in later times a street was added along the lake shore, so that now the bridge ends a block or a little less short of the church. 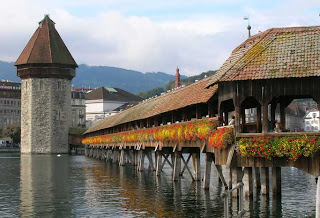 The bridge, which dates back several hundred years, was unfortunately damaged by a fire, apparently caused by a careless smoker, in 1993. So the middle of the bridge is now a reconstruction, but the two ends, closer to the opposite banks of the river, are much older. As you can see from the photo, it's a covered wooden foot bridge. What you can't see is that, at regular intervals, there are triangular paintings under the bridge's roof: war scenes with beheadings are on several of the painted boards. Paintings which are blackened and damaged on one side indicate how far the fire of 1993 reached. We crossed from one bank to the next on the bridge and walked along the shore, stopping in to visit the Jesuit church along the way. We recrossed the river on another bridge and went into the confusing streets of the old town center, tucked between riverside, lakeside and old city walls.

There are lots of smallish plazas in this part of the city, mostly named after their old functions, such as the various types of merchants who sold goods there. The old city also features a number of buildings with frescoes painted on the outside. The building in this photo (partially blocked at the bottom by a parked delivery truck) shows the Last Supper, with women present! 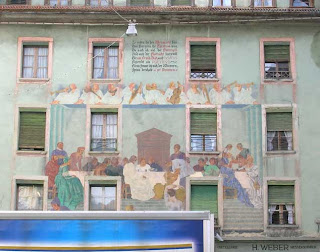 Another building represented the tale of William Tell. 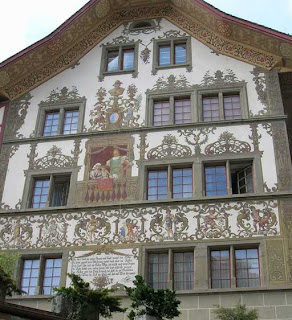 Cristian told us in no uncertain times that the story of William Tell is just a legend, quite similar in fact to an older Norwegian story. But the legend serves the purpose of indicating the feelings of those Swiss who were determined to break free of Hapsburg rule in the 13th century and live free of outside control.

At the end of the walking tour, Cristian and a number of our group left for a boat tour of Lucerne, followed for most of them by a trip up the mountain nearby in hopes of seeing yet more mountains in the distance. (Dashed hope, I heard later.) I stayed in town and explored. Along with my typical lunch, I also spent a good deal of time in the Stocker bookstore; roamed the city center some more, including a stroll on part of the city walls and up a couple of towers; and bought some souvenirs.

The walls include a number of towers, a few of which you can enter (if you don't mind climbing) and get a long view of the city beneath. I ran into two of my fellow-tourers here (a couple from a Denver suburb) and walked and visited with them for a while. Our walk took us, finally, to a staircase going back down, but outside, rather than inside, the city walls. That is, we were still in Lucerne, but we were on the otherside of the walls, and had to walk around a block or so and come under the walls to get back to where we had been. On the way we passed a field where several cows were grazing--yep, right in the middle of Lucerne. Funny thing is these cows were hairy! Were they part yak? You decide. 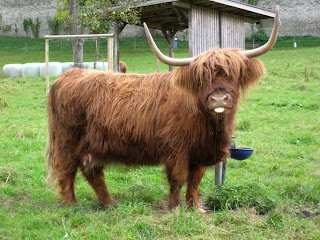 I also picked up a few gifts at the Manora department store and bought an afternoon cup of tea and a couple of very plain pastries called (spelling?) schenkeli before rejoining the excursionists at 3:30. We left Lucerne for the short drive back to Zürich: short, that is, in terms of mileage; Friday afternoon traffic made it not exactly short in terms of time.

Well, the trip was ending. We were back at Novotel for our last night: packing, resting, visiting a bit--before the long flight back to Dallas/Ft Worth International Airport on Saturday.
Posted by Cooper Renner at 8:47 AM

you make a trip in my country, I hope everything was nice!

Hi, the cow in Luzern is a Highland Cow - it's cold in Scotland!

Very interesting, good pics. In your free time, read this post on Lucern

Hello. This post is likeable, and your blog is very interesting, congratulations :-). I will add in my blogroll =). If possible gives a last there on my blog, it is about the Webcam, I hope you enjoy. The address is http://webcam-brasil.blogspot.com. A hug.