The Chester Walls (and "Moving House in Chester")

I began the day (after having breakfast and getting dressed, that is) in a fairly unusual way: I went looking for a hotel to move to so that I wouldn't have to stay at the hostel. Don't get me wrong: the hostel was nice enough, and the folks running it were nice, and it's got a very high rating from folks who rate hostels. But maybe I'm just too old for bunk beds, and a chilly room in summer, and no breakfast (which hoteling in Europe gets one used to), and so forth. After a little scouting, I found a pretty nice place, one given the thumbs up by the reception desk at the Best Western (which had no openings at one location and only openings at 70 pounds a night at the other location). So I went back to the hostel where the owner told me she couldn't refund tonight's bill, since I hadn't given 24 hours notice, but that she would refund Tuesday and Wednesday nights. So she gave me a credit card refund, and I went upstairs to pack up. Then I moved into the Stafford Hotel, not far at all from the train station. Same price as the hostel (since there I was paying for a room for two)! 40 pounds a night. I get breakfast; I have a spacious room; I have an electric heater if I want to use it (and I very well may); I have a (small) TV; and I have multiple towels and (quite a rarity in Europe) a washcloth! I'm pleased.

This hotel has wifi too, which I was able to connect to this morning, which you might have figured out since I made a posting this morning and actually answered some email. (Not that I still don't have a bunch to catch up on, especially elimae submissions.) The connection in the lobby is much faster than in my room (which I couldn't get to connect at all a few minutes ago), so I may spend some time tonight in the lobby, catching up on elimae work. It was great, though, this morning to do some of my email, get a two-fer Travel Log post done, and work on some elimae work which I had already accepted. After working for a while, I shut the computer down and left the hotel for lunch. I went to a place (which I'd spotted yesterday afternoon) called SpudULike, which has baked potatoes with a choice of stuffings. My stuffing was--butter! I also had a cup of tea. This morning's sunlight had given way to clouds coming and going and rain coming and going and, sometimes, sun coming and going. So even though it was quite wet at one point, there has also been some sun to cheer my spirits.

After lunch, I went to the visitor centre to get some information on walking the city walls. I got a brochure (free) and a "Walk Around Chester Walls" brochure (99 pence) and set off. The Walls brochure, besides given a numbered series of highlights to look for along with explanatory paragraphs also provides a pretty good overview of the main streets within Chester's walls, so maybe I won't get lost so easily here! The free brochure also has a less detailed map, but one which also shows some of the city outside the walls, which is also helpful. My hotel and the train station are outside the walls.

On my way from the tourist centre to the Eastgate, one of several places to walk up to the top of the walls, I took several photos of the Chester Cathedral. It's a massive-looking thing, built of what looks like red sandstone, and quite weathered. This photo, looking at the Cathedral from the back, gives a good sense, I think, of the square tower at the top, as well as of the way the perpendicular walls come in toward each other. In the foreground is a garden, which is quite a lovely spot: 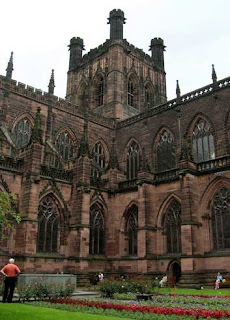 Chester has the most complete set of medieval city walls in Britain. They almost entirely circle the city. (As well as I could tell, there is only one short section where you are just walking down a sidewalk.) There are also places where Roman walls are still visible at the bottom of the medieval walls, which is a pretty cool thing. At the corner where you turn from the eastern walls onto the northern walls is the King Charles Tower, which--the brochure and a plaque at the site explain--is the tower from which King Charles I saw his cavalry defeated at the battle of Rowton Moor. 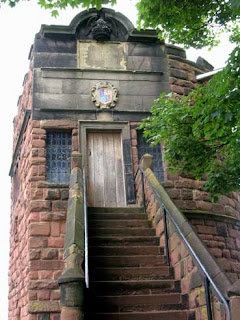 Chester was a "royalist" city, loyal to the king against the "parliamentarians," and was besieged for 3 or 4 years before surrendering in 1646. King Charles himself was beheaded in 1649, after which Oliver Cromwell took over the country. (I believe he was called the Protector.) One comes before too long to the North Gate, which is the highest ground in Chester and from which you can see into Wales, which is pretty close.

Continuing on around the walls, I came to the Roodee Racecourse, which has races from May to September. Along the outside of the walls there are also ruins of a Roman quay, for docking along the river (though the river has shifted course since then, and though I'm not sure I saw what I was supposed to see). Farther along is Chester Castle. The original timber fortress there was built under William the Conqueror, and what remains of the stone building dates to the 12th and 13th centuries. Apparently a lot of it was torn down in the 18th century, but what remains is still pretty big and impressive, from the high point it sits upon. Not too far from here is the Old Dee Bridge, built more than 600 years ago and crossing the Dee River. Just upstream from it is the Chester Weir, more than 900 years old. We would probably call it a spillway: a low dam, designed for the water to flow over it and create water pressure to run water wheels for mills. You can see part of the weir and the bridge in this photo: 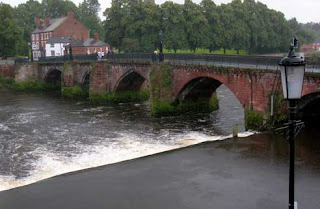 Around about here I ran into a tour group, German, I think. I keep dropping back behind them as I read my brochure, and then catching them again as they stopped to listen to the information of their tour guide. It was raining again by this time, and I couldn't help thinking how depressed I would be if I had to return to my chilly room in the hostel in such gloomy weather.

Outside the walls as you end the southern stretch and head back up toward the East Gate are the Roman Gardens. They aren't gardens that date back to the Romans, but rather a modern creation featuring Roman remains and the reconstruction of a Roman underground heating system, by which the Romans could heat rooms from beneath, especially at the public baths. Also outside the walls is the Roman amphitheatre. It is only "halfway excavated", though it looks like work has resumed on it now. Here is a photo: 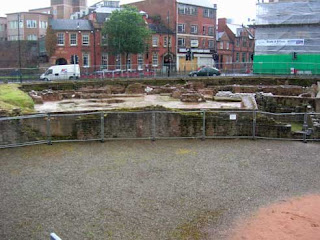 It was big enough to hold several thousand folks, they say, though the ruins as they are now don't look like so much, do they?

After I finished the circuit of the walls, I visited Grosvenor Museum, which has more Roman remains, a tour of what a middle-class home would have looked like in centuries past, a natural history exhibition, a silver exhibition, and also a collection of Chester-related art. Several of the paintings dealt with a St John church which has fallen apart. I got directions for how to get to it and visited it as well. This is a photo of part of it: 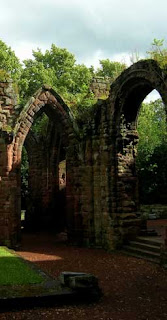 There is also a newer church, also called St John the Baptist, just to the west (I think) of the ruins.

Oh, and I visited 3 used bookstores today and finally, at the third of them, bought a nice little edition of Thomas Hardy's Under the Greenwood Tree, which I've already read, but which I thought I would enjoy reading again. I finished my English book on Saturday and have had only Spanish to read since then, so I thought, "Why not?" It was only 4 pounds 50 pence, cheap in these parts!

(PS: I am sitting in the Stafford Hotel lobby working on email and the Travel Log. Isn't that marvelous? I don't have to leave the hotel; I don't have to sit at Starbuck's; I don't have to try to find a little Internet cafe somewhere. I'm right here in the hotel.)
Posted by Cooper Renner at 12:34 PM

All of that masonry puts me in mind of Garner's The Stone Book Quartet.