We have docked at Port Everglades in Ft Lauderdale. I am currently ashore, at a St*rb*ck's location, doing email.

Slept late this morning--0840 Eastern time (i.e 0740 according to my body). We will, I suppose, pass some time Tuesday night or Wednesday into whatever time zone is east of Eastern.

Breakfast included grits this morning, though I haven't seen a sign of oatmeal yet. Maybe I should abandon the 24-hour buffet and try one of the dining rooms?

The ship seems to be swaying more today, though the water looks calm. (The current [1405] "weather" report shipboard says that our weather condition is "slight", which seems to mean "not much wave action.") I am wearing pressure point wristbands most of the time (and took my first motion sickness pill later in the afternoon).

At one point today, the bridge (where the ship is directed from) told us that our average speed has been about 16.5 knots. I don't know what that means, but we had covered by then about 75% of the voyage from Galveston to Ft Lauderdale.

I met an older man this morning who used to work for E.M. Kahn in Dallas and whose wife is a retired community college teacher from Northlake in Irving. He wasn't able to verify the hazy memory that some of my friends have about the monkeys at Colbert's in Wynnewood!

Lunch today included smoked trout as an offering. I gave it a try, since it seemed otherwise untainted. It tasted great. I'm eating a lot of applesauce and mashed potatoes, as well as bread and other baked goods, and "plain" meat.

After watching most of We Are Marshall (I dozed off near the end), I learned that we were passing south of Marathon Key about 2145. My sister, brother-in-law and nephew live there. Howdy, folks!

Our first full day at sea. About 1630, I asked one of the officers where we were. He said we were probably about half-way between Galveston and the southern tip of Florida. The photo below shows our wake. I took this shot from deck 7 aft (the rear of the ship). 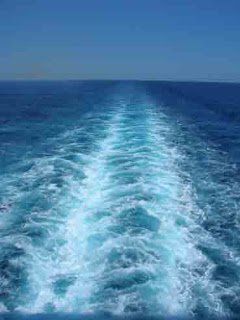 On one of the upper decks (15, I think), there is a sports and exercise area (fore) with a walking/jogging track, 1/10 of a mile long. One can go down to decks 7 and 8, however, and walk on a wooden deck, making a complete circuit of the ship. Most of this walk is on deck 7, but the fore part of the walk is on deck 8. The wind can be amazingly powerful on the foredecks. If one makes this circuit three times, one has walked a mile.

Today I have already had breakfast, mid-morning snack, lunch and afternoon tea. I have also walked at least a couple of miles, perhaps more, done ten minutes or so of yoga, spent time in the hot tub and pool, read a few lessons in my French book, and read several chapters of The Children of Húrin, the "new" book by J.R.R. Tolkien. I also watched the Bridge to Terabithia movie this afternoon, which does an admirable job of interpreting the book by Katherine Paterson. I also picked up a bottle of sunscreen and a gift from my travel agent, Donna Johnson, which was awaiting me in one of the shops onboard: a packable windbreaker/jacket, which will come in handy. Thank you, Donna!

I boarded the Grand Princess early Saturday afternoon at Galveston Harbor. The photographs below show the following scenes:

The downtown Galveston skyline from the ship (Look hard and you might make out the Gulf of Mexico in the distance); 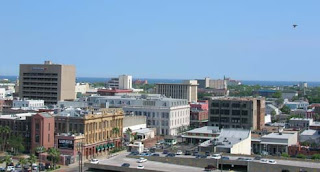 Part of the ship, looking up from a lower deck toward the engine area (I think); 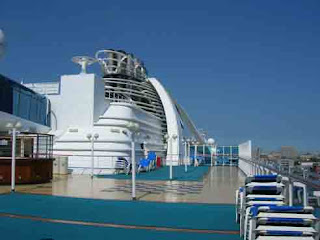 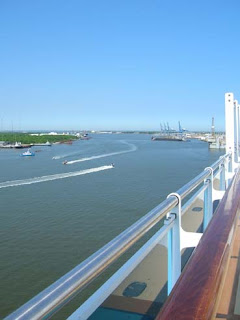 Posted by Cooper Renner at 7:52 AM

Hey Cooper
Just thought I'd look in. Sure looks and sounds better than trying to hire 6 more people to fill two more landscaping crews, which is what I've been up to the last few days. Not that the work isn't interesting, it's just, well, work. Rewarding, but gee! Envy is the word that comes to mind, regarding you in your situation. (Fraught with sin.)

Post on, OK? Keep us abreast of the life of the privileged (sp?). Whom have you met, in your forays, in steerage? 8o)

How do you feel about emoticons? (For me, should I, shouldn't I?)
Best
R

what a sleek lady your ship is, glad your weather is holding up against the motion. I wonder, is your trip across the atlantic via the Caribbean...
and then that mid atlantic metaphysical state of mind a la Blaise Cendrars?
looking forward to the 75c posting