Then I headed for the Plaza, Sliema's mall. The Plaza is not like an American mall, a sprawl of one or two floors of stores. Instead, like most things here, it goes up and not out. I'm not sure how many floors it is (five maybe), each of which has maybe 6-8 smallish stores. No giant department stores. Because Vanilla Wifi's Internet cafe is not open on weekends, I headed for Stella's, which features Vanilla, to get some work done over a cup of tea (actually a small pot of tea) and a chocolate turnover. The tea was fine, and so was the turnover (though I scraped most of the chocolate off), but I couldn't connect to Vanilla. So the manager (owner?) pulled out his cell phone right then and called up the Vanilla guy to report the problem. The guy said he would come out later to see if the router (or whatever it is) was not working right. Anyway, I tidied up the text of yesterday's post, had my tea and turnover, and then went out to find a spot to do some wifi-ing.

The problem, to be sure, was that even in the shade the midday light was bright enough to make it difficult to see the screen on my laptop. So I took care of a couple of emails, made the posting to the Travel Log, messed around a little bit more, then went to the supermarket to get some things for lunch and future meals. I had lunch on the balcony of my room (including taking this photo): 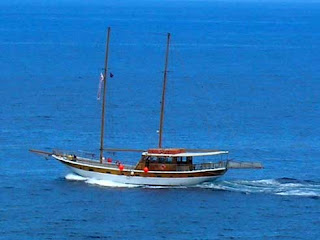 After lunch, I returned to Valletta.

St. James Cavalier Center for Creativity is built into the wall fortifications of Valletta. An employee (who, I learned today, is also a musician and composer--you'll have to read tomorrow's entry to get the info) told me that two of the rooms had been cisterns, one of which is now their cinema. They have remodeled and reworked the interior space so that it's a really wonderful blending of the original Renaissance (I think) fortifications and the contemporary exhibit space. You can see limestone walls and arches, and in a number of places they have built a display opening into a new wall, so that the old wall behind it is still visible. The new exhibit had just opened and featured works in a sort of centennial commentary on Picasso's 1907 painting The Demoiselles d'Avignon. The exhibition is called "The Philosophical Brothel", which they say is the original name of Picasso's painting. The work is by students in the University of Malta and the Unversity of the Arts London. I would think any artist would be pleased to be displayed in such a lovely spot. Here is one of the entrances: 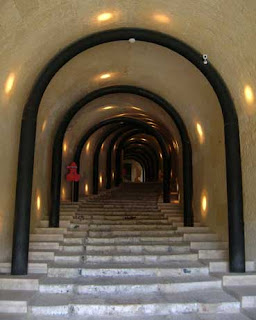 And this is a shot of the name placard of one of the works: 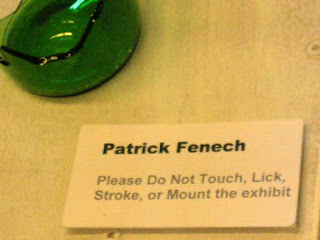 Wandering around on the walls, I had a short visit with an older English couple resting on a bench. They were interested in my plans, and the husband recommended that, when I return to the US, I begin caravanning (RVing) again.

This photo shows one of the walls close up. I'm assuming that the difference in the amount of erosion is due to the stone itself, some of which would then be harder, some softer. (Or maybe they've tricked me by replacing some stones.) 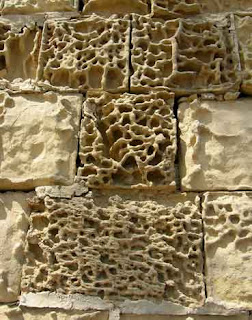 A Bank of Malta location there on/at the fortification wall right near St. James is serious about your not driving too fast into their parking lot: 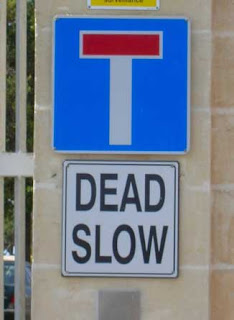 I wandered Valletta some more and found their mall, likewise a fairly constricted high-rise, which also has a cinema. Maybe at some point I'll take in a movie. While in a book and magazine store called Agenda (they have a location in Sliema and in several other places on the island too), I looked for a while at their selection of pens and pencils, still trying to decide if I ought to try my hand again at doing some sketching while I'm here.

On a totally unrelated note, I'm slowly reading (I haven't been spending a lot of time reading) the Spanish translation of Arthur Conan Doyle which I picked up in Barcelona: Historias de intriga y de aventuras. Stories of Intrigue and Adventure. These stories (that is, the few I've read) have some similarity to Doyle's Sherlock Holmes stories, as well as moodier and more Romantic elements, such as narrators who have determined to remove themselves from society for one reason or another. Given that I'm reading a Spanish version of Doyle's writing, I'm still impressed. Critics consider him "light" reading, but his skill is evident and the work is very well-done. While on board the Grand Princess, I read Julian Barnes's Arthur & George, a historical novel based on the lives of Doyle and a mostly forgotten lawyer named George Edalji, which piqued my interest in Doyle again. Barnes's novel is quite good, by the way, and it seems that he did a good deal of research before creating it.
Posted by Cooper Renner at 8:13 AM