Because I took so many photos today, I'm going to divide today's entry into two parts.

The Tarxien (pronounced something like TARSHEEN) Temples are right in the middle of the town called Tarxien. Who knows what the original builders called them or themselves! The grounds occupy, I suppose, two or three acres, but they might be bigger than that. A project is underway to greatly expand the visitors' center (one might almost say to create a visitors' center since the existing one is so small), and there is not a great deal of explanatory material on the grounds themselves. One is allowed to wander through at one's own pace, but if you want more information, I suppose you are supposed to buy the book!

The Stone Age structures on Malta and Gozo, to which the Tarxien Temples and the Hypogeum (see part two) belong, were all built prior to 2500 BCE, when the civilization producing them came to an end. Archaeologists have even suggested that the people may have abandoned Malta at that time. There seems to be no direct influence of the mainland on Malta, or vice versa, in the matter of these buildings--except, I suppose, in the general fact that there are a lot of megalithic (big-rock) structures in Europe. According to my Rough Guide, Tarxien belongs to the latest stage of development, the final 500 years of so before the end of the civilization.

There are three-piece (trilithon) structures here, as at Stonehenge--two standing stones with another stone lying across them--though these are not as big as though at Stonehenge. When excavations began here, not quite a century ago, the stones were in the ground, some knocked over, some still standing. A farmer kept running into the big rocks as he was plowing, and he notified the authorities. This photo shows some of the stones forming a wall. I can't remember exactly, but I'd say this wall was probably 7-8 feet high: 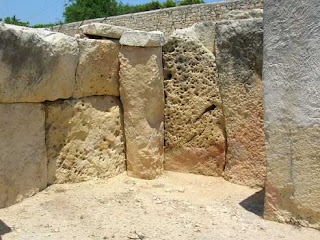 These are big rocks! The stone on the far right shows the signs of earlier archaeologists' attempts to "restore" the temples to their original appearance, which is now a no-no. There were small round rocks, not quite as large as bowling balls maybe, scattered around the site, and scholars hypothesize they might have been used to move the larger stones around.

This photo shows the surviving bottom of what must have been quite a large statue, maybe twelve feet or more high. It looks like a woman or goddess to me, but who knows what these early Maltese people wore? Maybe it's a priest or a god! Such delicate feet for such a large body. 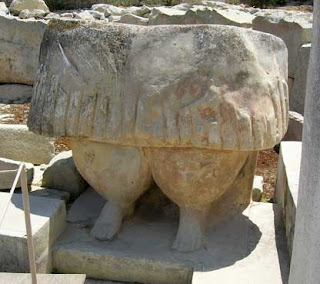 This frieze is rather charming, isn't it? The animals marching along together:

At another point in the temples, there are three carvings of larger animals--two bulls and something else which looked to me like it might be a lactating mother animal of some sort--but the carving is so weathered that the photographs are difficult to make out.

This is another frieze, using geometric patterns which might in some way recall or be linked to the spiral patterns inside the Hypogeum painted in red ochre. Though the Hypogeum was begun long before the Tarxien temples, it was still being worked upon until the civilization's end. 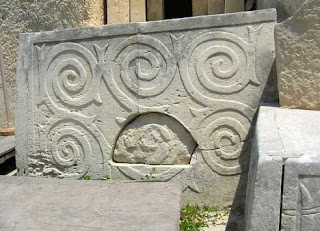 This shows an example of the doorway or trilithon feature, though this one is closed in. The supporting rock on the left actually seems to be made of separate stones, which might be reconstruction. I don't know. The "cauldron" in the right foreground is probably about a yard across. 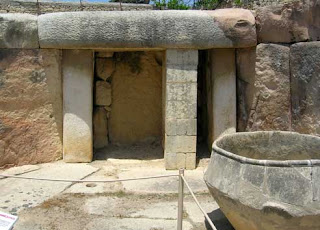 It was fun to wander the grounds at Tarxien, especially being allowed to go at one's own pace rather than in a guided tour as at the Hypogeum, and it's impressive to think that this accumulation of walls and temples is old enough that, when it was abandoned, the Great Pyramid was still a few decades away from being built. But the feeling one gets here in these reconstructed ruins is nothing like as powerful as one gets at the Hypogeum.

On the way to the Hypogeum and Tarxien, I talked to an English couple on the bus. They have been coming to Malta four times a year for 18 years!

Just a note a propos of nothing (or is it a propos nothing?). At one time or another, on the ship or on land, I have seen folks who have reminded me of: Linda Rivera, that Dallas-church-singing dude named Cecil (who looks like Kenny Rogers--Marty will know who I mean), Virginia Sinclair, Wayne Jackson, Frances LaChance, Vicky Glynn, Stacy Childress, and Deron Bauman.

Another note a propos of nothing: Don't most folks who spend four weeks on or very near the sea get tanned? Mind you, I'm not sunbathing, and my shorts come to my knees, and most of my T-shirts cover most of my upper arms, and my Malta hat pretty well keeps my head covered, but I'm only using SPF 8 on my lower legs and arms and neck, but I'm not sure I'm any darker than I would be from taking afternoon walks in El Paso. Of course it's true that I have generally found that SPF 4 is all the protection from sunburn that I need, unless I'm on the beach or in the river for hours at a whack, but this is ridiculous. Finally today, after wearing sandals without socks almost every day for four weeks, it begins to look like the 'sock' part of my legs may finally start to tan.

The cars are mostly European and Japanese, which is not surprising. I have seen one Chrysler/Jeep dealer, which surprised me, and this morning I saw a tiny little Chevy parked on the street. (Don't tell my nephew Maddison that Chevies aren't prominent here.) There is a vehicle named Seat, which I have never heard of before. There are Fiats, Peugeots, Toyotas, Nissans, Hyundais, Smarts, Land Rovers, etc. Mostly small. The streets are mostly quite narrow, and on some of them drivers go up on the sidewalk if it's a tight fit. One of my guidebooks says that the accident rate is high in Malta. I haven't seen an accident yet (and hope I don't), but I've sure heard squealing brakes and honking. Traffic goes slower because the roads demand it, but the drivers aren't any calmer, as far as I can tell.
Posted by Cooper Renner at 4:58 AM