Somewhere in the Mediterranean

Tomorrow is my buddy Tim's birthday. If you're reading this, Tim: Happy birthday!

We went through the Straits of Gibraltar late this morning. Quite a number of us got up early, expecting to encounter them before we did. I was up at 7, and talked to a kindly woman who'd been up since 6, but there was no sight of anything Gibraltar-ish. So I went for my breakfast and kept a watch out the window. No sight of anything Gibraltar-ish. So I changed into my exercise shorts, walked a mile and did some reps on the weight machines; then I changed into my trunks and sat in the hot tub and chilled out (I mean that literally) in the swimming pool. No sight of anything Gibraltar-ish. So I had my shower and got dressed for the day and went back up. Gibraltar!. Well, the Straits, that is. We passed through the Straits for a long time -- or, perhaps more correctly, we made approach to the Straits for a long time, with Europe in sight to our left and Africa to our right, before the entrance to the Mediterranean finally narrowed down more seriously. 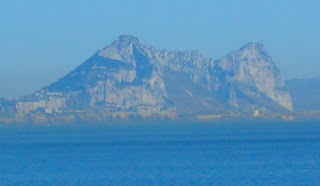 We were closer to Africa as we came through, and thus could see it more clearly: uprearing rocks and crags, villages, green fields and thickets. 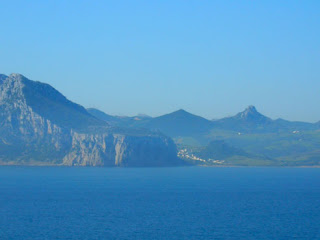 On the European side we saw a wind-farm on the slopes of the hills and Tarifa, apparently not a terribly sizeable town, before we got to the famous Rock itself, which is not as big as some of the elevation on the African side. But the land around it is mostly flat, and I suppose that makes it stand out a bit more. After passing through the Straits and into the Mediterranean, a woman told me that the large habitation, in Morocco, was Tangiers. So I have now seen Africa, though I have not stood upon its soil. A cool thought, even so. We even had dolphins (and maybe orcas) alongside for some of the time -- another cool experience.

And now, for the first time in my life, I can look out the window or off the deck and see the Mediterranean. And don't forget -- it means, more or less, the center of the earth. Cool.

I've been thinking about expressions and demeanors. I hope mine is more appealing than some of the ones I've been seeing on shipboard. I mean, a person can't help it if nature gives him a face like an owl's, but he ought to be able to keep from looking like an owl midway through eating a field mouse.

There are the folks whose faces look so sour, you would think they're waiting on a tonsillectomy instead of enjoying a transatlantic cruise. There's the man who does his walk on the narrow walking/jogging track at a casual stroll, directly next to his wife, if possible, so that anyone moving faster has to ask to get past them -- and all the while he's wearing khaki slacks and belt, tucked-in shirt, and leather loafers. Is he getting some exercise, or on his way to the club for a Scotch and soda with the boys? Or what about the woman stretched out in a chair, waiting along with a few hundred of the rest of us for a site of the Straits of Gibraltar (or, as I like to call them, the Pillars of Hercules), staring out so fiercely you have to wonder whom she intends to maim next time? Then there's the tall gentleman with the slightly bemused expression, which is at least pleasant, as if he is just about to greet someone cheerfully. But every time you see him the same expression is still there, and he still avoids looking at you.

If this is what people are like when they're on vacation, then what must they be like at home? Uncharitable, ain't I?

Today for the first time I was really irritated at Princess Cruise Line. They kept bumping back our arrival time in Barcelona, so that by the time we actually got into Barcelona to begin our walking tour (original ticket time 9:30) it was actually closer to 11:30. And yet they did NOT push back our departure time, thus shortening our available time in the most important city on the cruise. Both of my thumbs are WAY down for Princess today.

Barcelona itself is cool--at least the old section, which is what I wanted to see. (Who knows or cares what the new construction looks like?) I took off down a famous boulevard called Las Ramblas, but kept wandering off, getting lost and having to get directions. (Two of the people who gave me directions, an older woman and a young guy who was apparently a city employee cleaning up a plaza, were very kind and helpful.) I bought a package of ham, a Coke, and some chips at a small 'supermarket' and ate my picnic lunch in a little plaza. I supplemented this with a croissant from a little bakery on a side street, up which I took some photos of an old church (Sant Pau, i.e. Saint Paul, I believe). From the signs on some of the buildings I think it may have been a Muslim neighborhood, at least in part. Then I photographed two pieces of modern sculpture in a small city park. 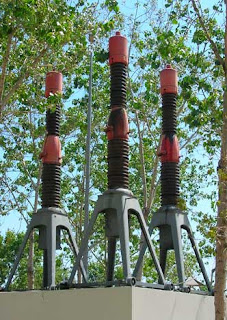 Finally, after getting lost a couple more times, I found El Triangle, a shopping mall, where I went to FNAC, a big book, music and DVD store. I spent at least an hour there, as you might imagine, finding book after book I stuck in my mind as my possible purchase. (I'm traveling light, remember, and I only wanted to buy one.) I looked at translations of Jack London, Chekhov, A. Conan Doyle, Orham Pamuk and other writers, as well as being tempted by nice hardback editions of Borges and other books by Spanish-language writers. Finally I decided on a translation of non-Sherlock Holmes stories by Doyle. 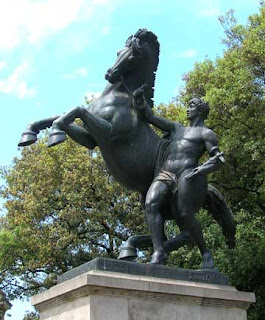 After leaving FNAC, I picked up some bottled water and a donut at a little coffee shop in the mall, and then began to wander some more. I found the cathedral, which is apparently being repaired and restored at the moment, though I'm not sure if my photos will show that. I found the post office and mailed some postcards (mostly to family members, so don't be upset if you don't get one, friends--your time will come). And yes, there was only one person on duty at the post office; and yes, neither person in line in front of me wanted to buy stamps and get out of the way (both of them were taking care of passport issues); and yes, I waited at least 10 minutes to get the chance to just buy stamps. Some things are the same in any country, I suppose!

I made a stop at one of the banks and used my ATM card for the first time on this trip. Interestingly, when I got my receipt, the entire transaction was reflected in Euros--which gives me a basic idea of the current exchange rate.

Lots of appealing narrow streets. Apartments above shops at ground level. Small parks and plazas where people are sitting, visiting, skateboarding, and so on. Not once, when I spoke to someone in Spanish, did they beg me to switch into English, though the teenage boy at the grocery seemed puzzled by my Spanish, and I don't know if it was my accent or that he speaks primarily Catalan. He asked where I was from and seemed totally bemused by "Texas" or "Estados Unidos". When I mentioned "Méjico" I got a glimmer of recognition. 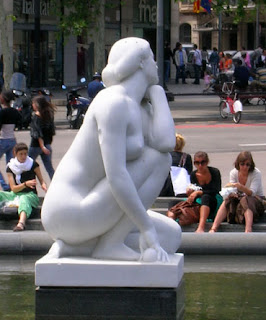