Another day in Valletta

My second full day in Malta. After breakfasting and cleaning up, I took off on a long walk. Instead of walking across Sliema (perhaps a half mile) and then taking the ferry to Valletta, I walked to Valletta. I don't know exactly how far it is, and I stopped along the way and looked around, so I can't judge by how long it took. But I did a lot of walking today. If you can get access to a detailed map of Malta, and especially the Sliema and Valletta areas, you will see that the coast is quite rugged, with a lot of separate inlets. So Sliema and Valletta are not very far from each other, across their inlets, but if you walk down one inlet and then back up into the next one, then you've gone quite a distance. I'm not sure if Sliema and Valletta are on one inlet, with an island in between them; or if there are two inlets, with the island more like a peninsula splitting the inlets apart. It's urbanized all along the route I walked, with busy streets and high-rise apartments (I don't mean thirty stories: most are probably 5 or 6) that have shops at ground level and so forth. There is also a large marina--the "yacht" marina--that I walked along at one point.

When I got to, or near, Floriana, the last town before I reached Valletta itself, I spotted an interesting-looking cemetery and went inside. There is a domed chapel (although I wasn't able to go into it) and a lot of 19th and 20th century tombstones: including English, Greek, Russian, Vietnamese and Hindu burials. I got into a conversation with a man who works there one day a week. He was telling me about various prominent people buried there, including a woman named Olga Mills, who was instrumental in the early days of the Baha'i Faith is buried there, but he wasn't able to pinpoint her grave for me. I thought it might be an interesting photo. He said visitors didn't often ask for her grave. But he also volunteered to locate the tomb for me on the cemetery plan and show me next Wednesday if I want to come back. I told him I wasn't sure what I would be doing next Wednesday, so maybe I'll go back.

From there, I wandered up closer to Valletta, peeked into a public garden called the Argotti Gardens, then went on into Valletta itself again. Today I visited both the Upper and Lower Bakarra Gardens, which are more like small parks by American definition. At the Upper Gardens, you can also watch the noontime firing of one of the cannons overlooking the harbor there. They do the firing nowadays with a 2-pound load of gunpowder, the soldier-host told us, but when they were using it in battle, they fired it with 10-pound loads! If I remember correctly, the cannonball would go up to 1.5 kilometers, almost a mile.

At the Lower Gardens there is a monument to Alexander Ball, one of the early British governors of Malta (he died in 1809) and for whom the Romantic poet Samuel Taylor Coleridge worked for several months in 1803. (Unless the cemetery guy and I have our combined memories totally crooked.) My photo of the monument is here: 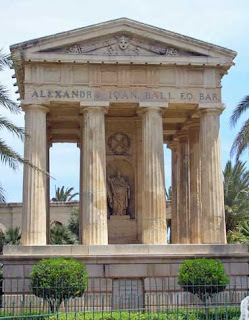 The park also features a recent sculpture of the Trojan/Roman hero Aeneas called Enea, which I suppose is either the Italian or Maltí spelling. Here is a photo of it: 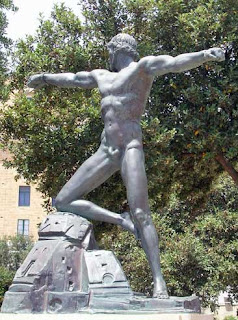 Across the way from the Upper Gardens (one has to exit the Gardens, go down to a much lower street, cross the street, and then climb again), is the Siege Bell Monument, which commemorates the Siege of Malta, 1940-43 (World War II) and those who lost their lives. This photo shows the sculpture which overlooks the harbor. (Or actually it doesn't overlook the harbor, since the statue is prone.)

The bell is housed in a temple-ish looking building, sort of like the Ball Monument, but round instead of square, with the very large bell hanging in the middle. I understand that it is rung at noon daily also, but I was busy hearing the cannon at that time and didn't hear the bell, unless it was the church-sounding bell I noticed about that time.

As I continued my walk, one of the carriage drivers (there are horse-drawn carriages all over Valletta) tried his best to persuade me to take the ride around the city, but I told him I was walking today and would perhaps do it another day. He was the second driver of the day to ask me aboard, but the other wasn't so insistent.

I visited the Carmelite Church nearer the center of town (I think the real name is something like the Church of Our Lady of Carmel), and this photo shows the enormous dome of the church, which is the highest point of Valletta, I believe the brochure said. I kept seeing the dome from far off and thinking it was part of St. John's, which is a much bigger church, but not as high. 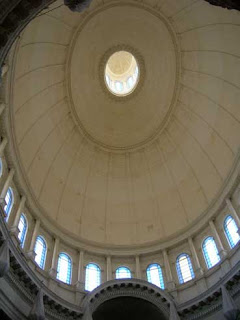 I also visited St. Paul's Anglican Church, which (for some reason I didn't quite understand) is not supported in any way by the Church of England and relies entirely on donations and offerings made specifically to it. I suppose, given the way the Anglican church is called "The Church of (Country)" almost everywhere it is found (the US is an exception, using the Episcopal name), that an "official" Anglican church in Malta would be called the Church of Malta. But I don't really know.

I also stumbled across this interesting historical marker on a street corner which apparently is the corner of the hotel as well. English literature buffs may get a kick out of it: 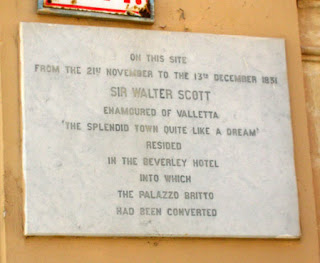 After some more walking, I stopped in at the Museum of Archaeology (which I did not yet wander) to buy a ticket to see the Hypogeum next week. This is, I gather, one of the most important Stone Age buildings in the world, and only 70 people a day are allowed inside to see it: 7 tours of 10 people each. Some, if not all of it, is subterranean, so it should be interesting. I am scheduled for next Thursday at 11 a.m. Near it is a temple, also several thousand years old, which I will hope to see while I am over in that area of the island. I don't think it's terribly far--maybe 10 miles or so--but I certainly don't want to walk there!

Lots of walking, lots of calories used up. I did not walk back to Sliema, but took the ferry instead. Even after the ferry docks, I still have a half-mile walk or so, though. After a brief return to the hotel, I took my laptop outside to the Strand (the seawall) to see if I could connect to the wireless service I thought I was unable to subscribe to on Monday evening and found out I was able to connect right in to it. I emailed for several minutes, then walked down to the wifi location because it was so windy outside. While there I worked on email, the travel log, and ClusterFlock, and also checked my credit card billing. I found out that the billing had gone through, so that will be my wifi service while I am on Malta. I purchased a one-month plan for 25 Maltese lira (which billed at $79.23--Internet isn't cheap here!). And I hope, of course, that I will find somewhere reliable to do wifi for the two weeks I'm on Gozo. Since I will be staying (if I can read maps) less than a mile from the main city of Gozo, I'm hoping there'll be at least one Internet cafe. But that's still four weeks away.

(PS: Perhaps someone can help us all out here. It's about 5:30 pm [or, as they have it here, 1730] as I post, but the time in Blogger says about 8:30 am. That's a nine-hour time difference. I'm assuming Google is on the west coast, which would mean the time gap between here and Dallas would be 7 hours. Maybe this is right, because I think I pick up an hour when I fly to London, and I believe London and Dallas are 6 hours apart. Eh? Anybody know for sure?)
Posted by Cooper Renner at 8:29 AM

By the way, you're right about STC, though it was from 1804 to 1806. He went there basically to de-tox, and was Public Secretary of the British administration of Malta, assisting the governor Sir Alexander John Ball.