Today I took a long walk again, from Sliema to Valletta, going mostly along the harbor-front and taking my time. I began by going over to Tigne Point (where there's a little park with a set of jungle-gym-style bars that I can do some chin-ups, push-ups and dips on). I'm not sure about the total distance: three miles maybe? Four?

Along the way I passed this beautiful Morris Minor convertible in the parking lot of the Msida Marina: 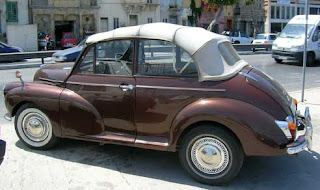 It made me think of my two older sisters, because June (or was it both of them?) drove a Morris Minor for a while in the '60s, when I was probably a sixth- or seventh-grader. If I remember correctly, it was the car a gush of water shot up into, one day during a heavy rain, when June drove into a big puddle: there was an open hole in the underbody of the car where the gear level was. Morris Minors were, and remain, quite an oddity in the U.S.

Not too much farther along from the marina is the "ecumenical" cemetery which I visited last week. This tombstone, which I found rather poignant, is simply one of many for men and women who died too young: 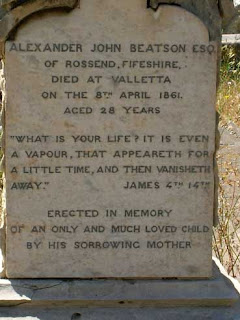 Along up the hill into Floriana from the cemetery I strolled a bit through the Argotti Gardens again and found an old man taking a noontime nap in the shade. If you squint, you can make out his shoes under the bench: 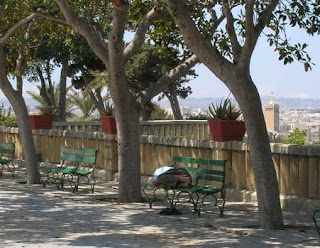 It doesn't take too long to walk the length of Floriana and come to the bus terminal just outside the Valletta city walls. In the center of one of the turn-arounds there is this fountain, truly one of the most peculiar things I have seen in Malta so far. The three mermen (?) hold up the smaller fountain bowl above them, and what peculiar mermen they are! For one thing I think you can see, at least with the merman in the right foreground, that their lower bodies are not the long single tail of a fish which one expects, but rather like two individual legs (with knees!), each of which ends in a fish-tail. Furthermore, their faces, which you cannot make out in the photo, are markedly Asian, almost like something you might see in illustrations for a Chinese folktale involving pirates or river-spirits. The water was flowing as I took this photo, but was off a few hours later when I came back by here to catch a bus: 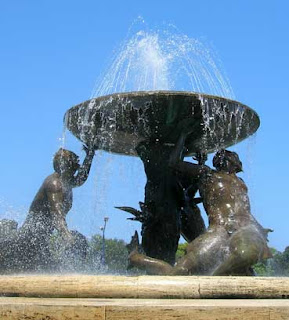 While eating my lunch at the Upper Barakka Gardens, I thought it might be fun to do a "drawing", rather than take a photograph, of one of the plaques mounted on the walls of the garden. The one directly across from where I sat was in the Maltese language and was clearly in commemoration of some aspect of the Maltese involvement in World War II. It was interesting to recognize the Maltese versions of "Nazism" and "fascism" -- N-Nazizmu and Il-Faxizmu. (I'm not sure I correctly remembered the spelling on the second: the Maltese x is pronounced like "sh".) But I decided against drawing this plaque, because the older man I was sharing the bench with didn't seem pleased to have to share the bench. So I wandered down a ways and worked instead on a (Rats!) longer plaque, in English, in memory of Sir Thomas Francis Fremantle, who died in 1819. I had some trouble keeping the rows of the engraving centered, as they are on the plaque, but at least the printing's not too bad. I guess you can't really call a transcription of a text a "drawing": maybe it's more like a document. I don't think Her Majesty's Forces will be needing my help in the art department: 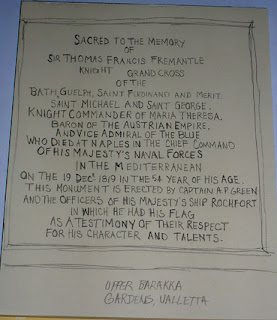 The "slant" in the photo is because I angled the camera away so as to avoid flash-glare, and the "Upper Barakka Gardens" is my notation, not part of the entire monument.

The Grandmaster's Palace, which was once exactly that, the Palace of the Grand Masters of the Order of St. John, is now used by the Maltese Parliament. Two museums within it are open to the public: the Armoury (British spelling) and the State Rooms. Today I visited the State Rooms, which feature paintings of the Grand Masters and suits of armor in a long high hall, several state rooms, a room of tapestries, and a lot of scenic and faux-carved frescoes. One is not allowed to walk all of the way into the various state rooms, which means that some of the art is not at all easy to see. It's also true that the portraits of the Grand Masters aren't distinguished art: they serve more of a historical purpose, I would say, for a pre-photographic age. The most interesting thing about the suits of armor is how small they seem to be. Assuming the lower body proportions are correct on the mannequins which hold the armor, the knights would seem to be smaller than I am--not just shorter, but smaller. Most of us have read about how much larger people have gotten, but it's one thing to imagine a 5' 2" Beowulf, 1200 years ago, and quite another to imagine mounted horsemen much the same size only four or five hundred years ago: 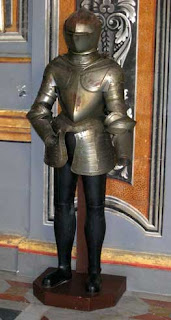 The tapestry room was probably the most interesting, and it's a pity that one is kept out of the back two-thirds of the room and has to peer at the art from so far away. Most of the tapestries are quite large, and a number of them depict scenes which I take to be views of exploration: one features an elephant; I think I recognized a tapir in another; and at least one or two look to be versions of the "new world", with iguana-ish lizard, scantily-clad aboriginals with bows and arrows, and so forth.

The State Rooms show signs of wear and aging which have not been recently repaired, and the 2 Lira entry price is ridiculous: a gallery of work which requires about 20 minutes of browsing oughtn't to cost more than 6 dollars!

Oddly, when I gave the ticket taker my money, he asked if I were 60! That's the age at which their "senior" pricing begins, and I think it's the first time I've been considered to be possibly that age. It was especially interesting to me in light of something I had just noticed earlier, when getting ready to go out this morning. I suppose we all do strange things (make faces, smile, frown) when we are, for whatever reason, looking at ourselves in mirrors. And we men certainly make lots of strange expressions when we are shaving with non-electric razors. So I had noticed months ago, if not farther back, that I had acquired a long vertical wrinkle in my left cheek, beginning at the outside corner of the eye and going almost straight down. I wouldn't call it a "worry line" because it was prominent when I smiled as well, but I noticed this morning that it is nearly gone. I took that as a good sign that retirement was agreeing with me--until the ticket-taker came along, anyway!

Corrections: Both my Lonely Planet guide to Mediterranean Europe and one of the employees at St James Cavalier have corrected my misperception about the Maltese language, Maltí. It is not derived from Arabic, although there are some Arabic imports into the language, along with other imports from English and, I assume, the languages the Knights spoke. It is, like Arabic, a Semitic language, but according to Lonely Planet it is "believed to be based on Phoenician." This makes sense since the Phoenicians/Carthaginians were here before the Romans took over in 218 B.C.E., but it's amazing that the language survived all those subsequent conquests, beginning with the Romans. The man at St James also said that Maltese people can understand the Lebanese, and vice versa, and I didn't even realize that there was still a surviving version of a native Lebanese language!
Posted by Cooper Renner at 7:23 AM