Today I spent an hour and a half or so at the National Library (Bibljoteka Nazzjonali).

The "j" in Maltese is pronounced like an "i", and the "z" is either like "ts" or "ds", depending on whether it has a dot above it or not. I believe the library's name would be something like "BIB-lee-oh-TEH-kah NATS-ee-oh-NAH-lee". 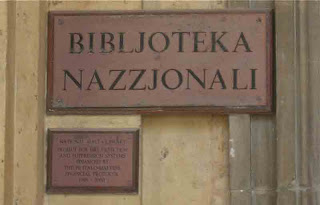 That lovely lady out front is Queen Victoria. And in the plaza to both sides of her are the tables, chairs and sun umbrellas of the Cafe Cordina, whose kitchens and so forth are across the street. 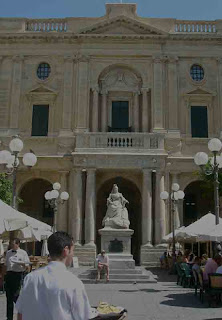 Maltese libraries use a form of the Dewey Decimal System familiar to most Americans. I suppose it was brought to Malta by the British. They also use a form of card catalog similar to our old card catalogs, as well as cards bound into little books. I don't know how many ways there are of searching for books: in the US, of course, we search mostly by author, title or subject. The card catalog I used briefly had the cards, however, in shelf order--that is, by the way the books are arranged on the shelf, in their Dewey Decimal Order. So to use it, you have to know the Dewey Decimal number you need. I had started going through a drawer showing books for Malta, when one of the librarians (or clerks--I don't know) came and pointed the bound cards out to me. The "catalog" I was looking in had hand-written cards for the books specializing in Malta as a place, kind of like geography books might be, and the style of handwriting was quite difficult for me to make out sometimes. Words were fairly easy to piece out, but individual letters--which are used to identify where the books are located--were more difficult. They looked as though they had been done decades ago, though that might have been the case. It may simply have been an issue of writing style.

When you find the book or books you want to look at, you have to fill out a slip and give it to the librarian to go get the books for you. In my case, as a visitor to Malta, I had to list on the request where I am staying in Malta. (I also had to present photo ID and sign in to enter the library, and as far as I could tell the woman at the reception desk was typing my name into the computer: perhaps they keep a permanent log.) You are allowed to take only paper and pencil, or laptop, into the "reading room".

I spent most of my time taking notes from a book the librarian seemed to think highly of. It was a facsimile printing of a book first published in Malta in 1838, written, I presume, for the English living and visiting there. It's called "Description of Malta and Gozo", by George Percy Badger, and gives a summary of Maltese history before entering into facets of daily life, such as what men and women wear, what the agricultural products are, and so forth. It had a very interesting short version of the last decades of the knights, the invasion by the French under Napoleon, and the subsequent expulsion of the French and assumption of power by the English.

The other book was an original edition of a book published 200 years ago in London called "Observations on the Climate, Manners and Amusements of Malta" by William Domeier, M.D., who seems to have written the book for English people who needed a warm climate to convalesce in. The Napoleonic wars had rendered the warmer parts of Europe's mainland unaccessible to the English, so Malta was a handy substitute. I didn't look at this one much, though I may go back and examine it more later to see what they were doing for "amusement".

I'm looking into this time period with the idea of writing a novel set during that era--another one of my Maltese werewolf stories.

Earlier in the day I had been to Sliema, mostly doing functional things, like checking back with the hotel I will stay with when I leave the guesthouse and stopping by the bookstore there to see about the possibility of special orders. (No go--the orders can take as long as 6 weeks to arrive from the U.K. and I'll be leaving for the U.K. myself on June 15.) The most unusual thing I did there, unusual only for me and not for regular folks, is that I ate out for lunch. A Tex-Mex (yes, you read that right) restaurant near the hotel I'll be moving into later has "jacket potatoes". [We call them baked potatoes.] I had gathered on my first trip to Malta that these were seasoned/basted before baking, making them impossible for me to eat. But I went in anyway and asked the lady, and she said that theirs were simply baked potatoes. So I sat down and had two small jacket potatoes, with butter and salt, and a pot of tea. I'm sure I'll visit them again once I'm staying in Sliema, if not sooner.

Earlier in the day I stopped by the ticket office of the Teatru Manoel (Manoel Theatre) and asked about prices on tomorrow's performance of experimental music by an Italian percussion group. It's possible that I may go to that show with two English women I met here at the guesthouse. Tickets range from 10 to 20 euros, so if we can get seats at the 10 or 12.50 price, we may very well go. If so, I'll be writing about that late tomorrow night, or possibly the following day.

My friend Lou Ann will be glad to know I solved the mystery of Boots the Chemist. Boots is an English-based pharmacy chain, and Lou Ann has recommended that I try the English/European version of acetaminophen for my arthritic hands. Well, I could NOT find a Maltese location for Boots, though Lou Ann said she found one on the Internet, and people here told me Boots is here. Well, it's not, BUT the chain called Chemimart sells some of Boots's products (and may once have been Boots for all I know, since people think of it still as being here), and the store in Sliema actually has the Boots name on one of its store signs. So tomorrow morning, I will try Panadol and see if I get more relief than I do from aspirin. Wish me luck.
Posted by Cooper Renner at 12:46 PM