Dalli, Caruana Dingli, and a Concert

Today I went to two art exhibitions, one quite small, the other quite extensive. The first was a special exhibit, in a small hall off the main entrance of the National Museum of Fine Arts, which I visited in 2007. These were primarily nudes by Maltese painter Patrick Dalli, only about a dozen paintings in all, two of which were portrait busts. One of the nudes, a woman standing sideways to the viewer, was very impressive in the way the lower body especially, but to some extent the upper as well, looked almost sculptural in its weight and solidity.

The other exhibit, at the Grandmaster's Palace, was a sizeable look at the career of Maltese painter Edward Caruana Dingli who died in 1950. 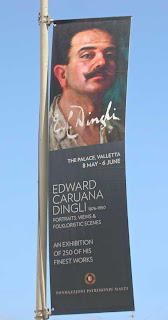 A large portion of the exhibit consists of portraits in various sizes--some quite large--of notable Maltese of Caruana Dingli's time, as well as "ordinary" people, and even kings of England George V and George VI and Princess Alexandra, who was, I believe, George V's wife. The enormous portrait of George VI, who was Elizabeth II's father, shows him in brightly colored and complicated regalia, but with a rather impish face done in sharper, rather photographic detail. George V is represented here by a full-length formal portrait and a bozzetto (a smaller version of the same pose and sitting), as well as a sketchier, more impressionistic portrait bust which is much more interesting, I think. Because Caruana Dingli was painting throughout the first half of the 20th century, some of the portraits make me think of old movies: his subjects look ready to do a dance routine with Fred Astaire and Ginger Rogers, or step out for the evening with Grace Kelly. There are professors, monsignors, chevaliers, a judge, an archbishop and so forth, as well as less upper-crusty portraits such as "Portrait of a Lady in Military Uniform," two fortune-teller portraits, and an impressionistic long-bearded monk with skull cap. In his portrait, Professor Salvatore Cassar looks, holding a book, with the right forefinger lifted up, looks like he is just about to launch into the introduction to an episode of "Masterpiece Theatre." Two of the best of the portraits, in my opinion, are ones done in pastel chalk instead of oil.

The exhibit also includes a great many scenes of Malta and Maltese daily life about a century ago: two different Valletta fish-markets, one in watercolor, one in oil; boys playing marbles; a peanut seller; church festivals and celebrations; the promenade at Sliema (I think this is the same place that I usually call the "sea wall"); and "The Shelter", a painting in dark tones of people waiting out an air raid in 1941. There is a beautiful watercolor of the ancient temple of Hagar Qim, and an interesting scene from an expedition he made with the Royal Malta Artillery to Egypt: "The Egyptian Barber," characterized by the mud-coloured buildings and the bright robes of the people and in which the barber is shaving a customer. The bulk of the work in this exhibition is in oil, but in my opinion Caruana Dingli was best working in pastel and oil.

After having my lunch in the Upper Barrakka Gardens, I worked for a while on a sketch which looks from the arcade, through one of the arches to some table umbrellas and a snack kiosk beyond. After sketching out the main lines, I moved to another spot, as the sun was shining directly on my paper. A man stopped to look, and I had to explain to him that I wasn't drawing mostly from where I was sitting, but from farther back and over, on the other side of the arches.

Then I took a stroll through Floriana to the Argotti Botanical Gardens and got a few photos there for you. You're forgiven if you think I actually sneaked this one in from El Paso or Arizona. This big cactus of some sort would look right at home in the American Southwest. Remember that Malta is relatively dry and rarely has freezing temperatures.

This photo gives you a bit more sense of life. While that cactus may be native to Malta, I wonder about these splashes of color. 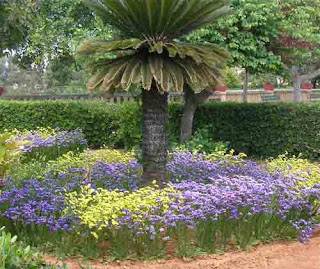 And this man seemed to be sleeping the sleep of the just (or of children) with his shoes parked on the bench beneath him. Obviously he is more attuned to the temperature than I am!

This last photo for the day is another stab at the Lower Barrakka Gardens from the Upper. Not quite as late in the afternoon as yesterday's shot, so the Ball Monument is highlighted. 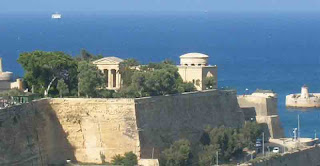 I had my supper earlier because I needed to be cleaned up and ready for the concert at Manoel Theatre. Tonight's show with the Malta Philharmonic Orchestra was called "The Composer Conducts" because the second of the three pieces performed was written by the composer Joseph Vella. The first piece was a work by Benjamin Britten, but I don't have a program and don't know the name. It wasn't familiar to me, but I especially liked the second section when the string players did a good bit of playing with their hands instead of their bows. Vella's piece, which was a world premiere, featured only 13 players of wind instruments. The first section of it was quite sprightly, and it made me think of the decades-old Disney animation films--and I don't mean that in a negative way at all. The second section was slower and more melancholy, with a bit of discordant tones, and the third sort of combined the moods of the first two.

After the interval, the full Orchestra performed one of Mahler's works, but again, I don't know which one. It concludes with a vocal performance by a soprano. Does that help? The Britten and Vella compositions totaled only about 45 minutes, but the Mahler work was about an hour long. One thing that surprised (and annoyed) me about the show was that I could hear traffic passing outside. I realize the theatre is quite old, but I certainly would have thought they could do something about that. I didn't notice anything of the sort at the Ars Ludi performance, but maybe that was because the percussion works were inherently louder, or because we were sitting in the highest seats, the gallery, whereas for this show I was on the main floor, very near the back and the door. I was also a little surprised (and annoyed) on a few occasions to hear people talking in the audience while the music was playing.

And finally, you've all been waiting for a weather note, haven't you? So hear it is:

Enough with the north wind already! Jiminy Cricket, is it EVER going to be warm again anywhere in the world? If I go to Death Valley on July 15th at high noon, will it maybe creep up to 72 degrees? I take it as a given that London will be cool to chilly, but that's London. People come to Malta TO GET WARM, which can't happen if the jet stream won't go back where it belongs. Walking back from the theatre tonight, I was wearing blue jeans, a polyester t-shirt (which is usually warmer than cotton), a long sleeved shirt and a windbreaker, and I was walking fast, and I was freezing. Good grief. It's May 18, not New Year's Day.
Posted by Cooper Renner at 1:29 PM