Happy Mother's Day to one and all, and especially to Mom and my sisters and nieces, mothers all. Today is also my nephew's birthday--Happy birthday, Maddison!

Those of you who like to know that men can, occasionally, do something patently useful will be glad to know that before I went out today (officially, that is--I had already had a short walk earlier) I did a bit of stitching in the armpits of my Portugal shirt. Don't know if the shirt simply wasn't well-made, or if my hand-washing and -wringing it out is too much stress for it.

Today was principally devoted to the Valletta Grand Prix. I went out first to the Valletta bus terminus where the cars where coming around the ring-around there (but my photos from there were worthless), then to several spots on the sort of northwestern part of the peninsula near the ferry dock, and finally to the Lower Barrakka Gardens (where I principally sat to draw, though I took a few useless pictures there as well.) So the photos of today's race will be coming from the western side of the course, where once, and only once, I actually saw a passing maneuver (photo below). The race was based on timing, as I understand it, and not on laps counted, and took place in 20 minute sections. The narrowness of the streets where the course was laid out means that the cars left in staggered fashion. As you'll see from the photographs below, the cars are principally older models: mostly, I think, from the '60s (and maybe '70s), though one looked to be from the '30s. There was one (or maybe a couple) of newer-looking vehicles, and I don't know if they were judged by a different standard or not. Yesterday I saw on the course a quite new Mini Cooper, but I don't recall seeing it at all today. And the VW which one of the other observers yesterday was convinced had wrecked was nowhere in evidence either: so I guess it was definitely out of the running! At one point during the morning an Austin Healy convertible was in first place, but I don't know if he held that position or not. I didn't hear who won. Perhaps it will be in tomorrow's paper (though whether I will manage to see it is another matter. In 2007 one or two of the kiosks outside the main gate of the city sold Sunday papers, but I didn't see one today. Of course tomorrow the bookstores will be open, and they will have papers.)

So here are a few of the many shots I took today. First, one of a Sunbeam with the really old car hot on his tail. The old car has a picnic basket on the rear, with a sign on it. I don't know what the sign said. 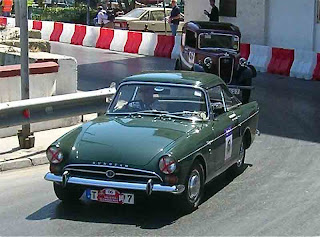 Next a little red guy burning smoke in a Mini's face. Some of you may recognize the logo on the front of the red car. I don't know it. 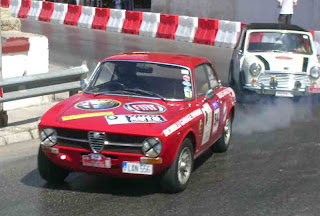 In this shot I managed, pure happenstance, to get five cars at once in. I think it's the Jaguar sedan at the back.

And here's the one and only passing incident I saw.

I like this one because the tilt of the bodies, as they swerve around the corner, actually gives the sensation of movement. 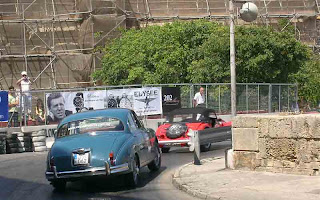 And finally, this one, the blur of motion. 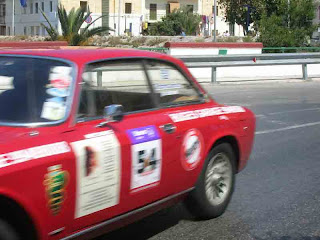 I'll also include one of the photos I took at the auto display at the terminus. There were a few American cars there, but mostly they were older European models, some quite old. Some beautiful MGs, for example. This one is the one that said, I'm pretty sure, "ROYCE MOTOMETER" on the hood ornament. Not Rolls-Royce, just Royce. Another was a Singer! Same as the sewing machine company? I don't know. 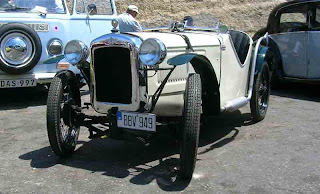 In one of the breaks I took from the race, I went to a restaurant called La Valette on Republic Street for a pot of tea. I was sitting and reading, when a young man walked up and asked if he and his companion could share the table--it sat four, and I was alone. He was from Ireland, and I'm not sure if he was officially helping the woman--from Quebec--with her English or if they had just met up for the day. She was an older woman (though not, I think, as old as I am) who had come to Malta for three weeks to study English. She has been staying with a family and attending classes during the day, just like the college kids from Europe do. I thought that was pretty cool. The young man said he had seen several Americans during his time here and also mentioned the possibility of the Icelandic volcano interfering with his flight back to Dublin on Tuesday, but let's hope that little puffery will be done with. What a lot of trouble it has caused. (Maybe it's involved in the chillier than normal weather right now in Northern Europe? Guys, I'm not getting much news.)

I also talked for a while with another man photographing the race. He and his wife are, judging by accent, from England. He mentioned that he still has a 50s model Triumph, which he bought in 1971, his first cool car to own. It's pretty amazing to think of buying a vehicle at 20 or so and keeping it for 39 years and counting, but a car like that would definitely be worth it.

May 8 is Mother's Day in Malta, so I guess next year the US and Malta will match up!
Posted by Cooper Renner at 12:11 PM

It is nice to see these classic autos up and running, much less racing on the field! It is good that there are some people who give some time and effort to keep these vehicles alive, and restore them back to their former glory. And I hope events like this will continue, so we can see these cars perform at their best! [Nettie Christensen]