You could be forgiven for summarizing my days in Malta as "eat/walk." Here's a simplified version of today:

And there'll be an evening snack before too long, as I work on the computer.

On that second walk this morning, I went down to the Lower Barrakka Gardens and the Siege Bell Monument. An older man asked me to take his photo with the bell behind him. He came to Malta in 1942, he said, with the British military. That would have been during the Axis air raids, of course, which did so much destruction upon Malta. While I was there a smaller cruise ship--about 8 decks--was entering the Grand Harbour. So I got this photo of it, not long after it had passed the breakwater. 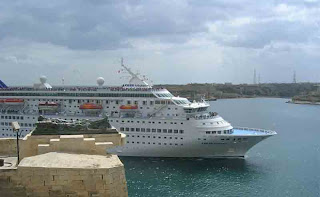 There are breakwaters (or maybe one is a kind of causeway) on both sides of the Grand Harbour, one from the north, one from the south. The northern one, which may be the breakwater, has two small openings in it--not big enough for a cruise ship!--where there used to be a bridge, I think. It's really one opening with a pylon in the middle of it. The main opening to the Harbour, where the cruise liners and big merchant ships enter, is between the two breakwaters. Because of the way they are laid out, the ships can't exactly made a straight-on quick entry. I imagine the knights designed this with exactly that "kink" in mind. In this photo, it all looks rather small, but it's not. Ocean-going vessels can enter through that opening on the right, and the harbour is plenty deep enough to handle them. I believe they say that the Grand Harbour is the largest natural harbour in the Mediterranean.

Later I took this photo. The ship not yet docked is the one in the first photo above. The other ship, which looked to be as large as the Equinox I crossed the Atlantic on, was already docked. It is part of the MSC line, I believe--though I don't know what line that is--and the other smaller ship says LOUIS on the ship. It looks like it is too small to want to cross an ocean--unless the passengers don't mind a rough ride in a storm.

I had my lunch at the Upper Barrakka Gardens and heard the noontime Saluting Battery performance behind me as I sat and ate. The men dress up in the uniforms from the old British days and put on a show of what used to really happen. Of course they don't load balls into the cannons when they fire them. After lunch I went over to St James Cavalier for the short concert. The pianist Deborah Harrison is actually a mezzo-soprano and plays the piano mostly, she said, for her students. The singer was baritone Ivan Vella. The concert was called "Lullaby of Broadway," and they performed that song, "Edelweiss," "Oh! What a Beautiful Morning" and 5 others. Sitting near me was the same British woman who was there last week, and she wanted to see the drawing, of course. The pianist, who had also set up a camera to film the performance, was near the door as we exited, and I could hear the woman telling the pianist of my drawing, which she wanted to see. She liked it, so I let her have it. I've got the photo of it, but that's all. It's fun to have the performers get a kick out of being sketched.

I've been looking at silver on and off for a while here--I have sisters, you know--and one of them has a birthday very soon and specifically requested a Maltese cross. Finally today I made that purchase--which I will not show here, both because I don't want her to see it before she receives it and because the clerk at the shop already bundled it up for me to put in a shipping envelope--as well as another gift, of a sort I won't mention, for another sister, and--on a sort of minor splurge--a ring for myself. I don't wear a lot of jewelry, but I thought a simply ring with a Maltese cross on it might be appropriate for me to have. The two very simple styles I looked at first were not available in my size, but this one was: also simple but with a red inlay of some sort which will remind me of my dad, who loved the color red. And I still have yet another sister, and a mother, to ponder. 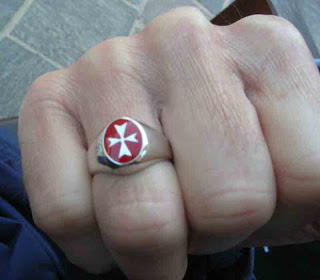 I had my supper (tuna, applesauce, PomSticks!) in Upper Barrakka as well and got this photo of the Louis cruise ship going back out to sea. A fitting bookend, no? 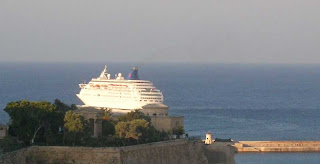 Purchase a small pack of index cards. On each card, write one of a typical day's activities (breakfast, walk, shower, and so on). Shuffle cards, or, if you are feeling especially devil-may-care, fling them in the air, then collect them up. Use as a guide for performing daily activities in a new and exciting order!