This morning I had my mid-morning pot of tea from the Cafe Deux Baronnes, which is just up the road from the guesthouse. It is on the same terrace as the Saluting Battery (where they fire the cannons at noon every day) at the Upper Barrakka Gardens, and one of the other guesthouse guests had mentioned several days ago that it was a nice place to watch the firing. I was there too early for that, but I had a nice pot of tea and a bit of reading before getting into my day in earnest. Here's a shot of the table area of the cafe, looking out toward the Grand Harbour. 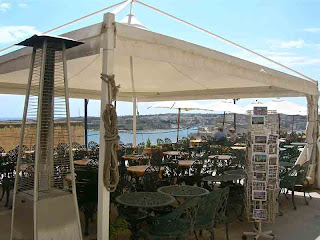 I had initially planned to go to the 11 a.m. concert at St Catherine's, and then in the afternoon take the free harbour cruise from Latini Cruises which I would receive as a bonus for having used the hop-on/hop-off bus tour the other day. But when I check the cruise time for Sunday, I realized I wouldn't be able to easily do both, as the second and last Sunday cruise leaves from the Sliema Strand at 12:30, and I wanted to have lunch before the cruise. So I decided to skip the concert. I went back to the guesthouse and packed for my "trip", then stopped by Wembley's for a packet of chicken roll and some chips (sigh--the only chip they had that I could eat was Pringle's: no PomSticks!) to accompany an apple and some tomato juice. I opened and began eating the chicken roll as I walked from Wembley's to the dock where the ferry runs between Valletta and Sliema.

Some of you may recall from the 2007 blog that many of Valletta's streets are steeply hilled, and some are actually stone staircases. I normally try to walk on the street near the curb, rather than the sidewalks, in Valletta, because the sidewalks and outdoor staircases in Malta are so slick--whether it's the stonework itself, or an oily residue from the relatively dry climate--that I find myself slipping, even in rubber-soled shoes. The curving road that leads down to the ferry dock is especially tricky because the sidewalks are slick, there are usually cars parked on one side, the road is narrow, and there is motor-traffic on it. It's the kind of thing we don't even think about in the U.S. of course.

Anyway, once I got to Sliema, I had the rest of my lunch, having finished the chicken roll before getting on the ferry. The Latini Cruise was full, and is on a smaller boat than some of the other harbour cruises, particularly Captain Morgan, which uses a boat large enough for probably a couple of hundred tourists. There was light blankets on the boat for us to use, and I snagged one. I was wearing shorts, but I put on my sweatshirt and windbreaker both over my t-shirt before the cruise got underway. I wrapped the blanket more or less around my legs, though by the later part of the 90 minute cruise I was also rolling my hands into it when I wasn't trying to take a picture.

This particular cruise covers the two harbours that flank Valletta and Floriana--Marsamxett to the north, and the Grand Harbour to the south. One of the first things we learned is that the cruise is called the Latini Cruise because that was the kind of sailboat this boat used to be: I think we would say "lateen", but I may have that wrong. Sailing lore isn't my strength.

In order to go from Marsamxett where the cruise begins and where the Sliema Strand is, we have to exit the relatively calm waters of the harbour and enter the Mediterranean proper as we round the east end of Valletta and head through one of the openings in the breakwater into the Grand Harbour. The wind was up today--what else is new?--and the Mediterranean gave us a few big waves as we went from one harbour to the other and back again. Our guide--I think he called himself Captain Joe--gave us history on the various sites he pointed out to us, much of it dealing with the Knights, of course, but also with the times before and after. This shot is of a ship which has nothing to do with the knights: it's called the "Black Pearl" and is, as you can see, on land. It's now a restaurant but once belonged to Errol Flynn and was taken onto land after being used in a movie--I forget which one--and then being found no longer seaworthy. 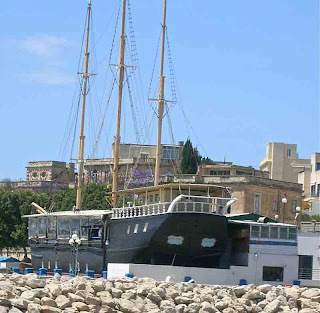 One of the interesting things about these two big harbours is that the little nooks or branches of them are called "creeks", though they just look like an arm of the harbour. Certainly nothing like what we Americans would call creeks. Joe said the Grand Harbour is actually 2.5 miles long, which I would never have guessed (but if you look on a map you can see it does cut almost halfway into the island), and that the length of its coastline is 9.5 miles. (I just now consciously realized that he said miles and not kilometers. Normally kilometers--well, kilometres--are used here.) There are a number of marinas in the various parts of the harbour, of course, and here's a shot of one of them. Would you like to have a boat tied up here, do you think? 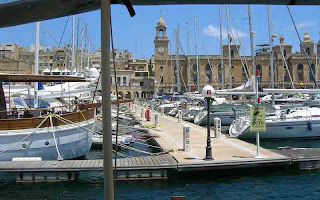 Joe also explained something that I have had entirely wrong. When looking across from the Upper Barrakka Gardens and seeing all these cranes to the south, as well as a large hole in the ground--with water right on the outside of it--and what looks, from the Gardens, almost like the kind of bandshell that the Hollywood Bowl is, I thought some kind of big new construction was in progress, but I had no idea what it was. I was completely wrong. The cranes are for loading and unloading ships, and that big rectangular hole is one of several dry-docks in Malta for ship repair and maintenance. And that bandshell--it's not shell-shaped at all--it's a half cylinder, sort of like a really big quonset hut open at both ends. If I followed Joe correctly, it's a place for repairing yachts. And yes indeed, you will see some big yachts around here.

Another interesting thing about the cruise was being able to see Valletta from the water. This seemed like the kind of panoramic shot you might want to see. If I've got my memory straight, this is just a little bit west of where the Lower Barrakka Gardens and the Siege Bell are.

This last shot from the cruise is of a tower built by the knights out onto the steeply sloped hillside above the water. It's pretty cool looking, I think. And of course you also get a look at Captain Joe, with the microphone, and the heads of some of my fellow sojourners. 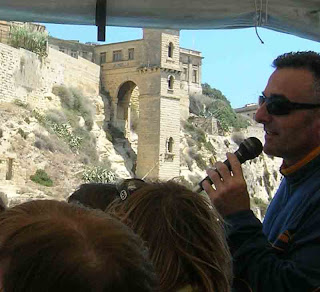 After the tour, I came back over on the ferry and headed toward the Valletta Waterfront. One of the things we had seen from the cruise was the Malta Ford Show (I think that was the name) on the docks there. I had read about this and thought I would go, and then had forgotten. Along the way I took this picture, which I'll direct especially to my sister Teresa and my friend Lou Ann. I had first seen a sign like this in Floriana near the Scout Headquarters, but hadn't gotten a photo of it. This one I came across on my way to the waterfront. Apparently Floriana takes its feral cat problem seriously, and also humanely. I hope you can read at least the right had side of the sign. The left is in Maltese. 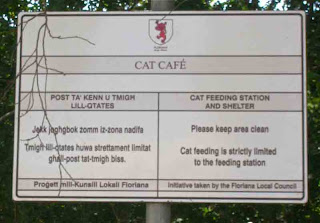 The Ford Show wasn't mostly "old" cars, at least not old by my definition, as I had expected. Some of them looked rather new, and many others seemed to be from the '60s and '70s, about the vintage of the Grand Prix cars, so I won't bother you with any photos here. Most of the cars were Fiestas, Escorts, Sierras (yep, that's a Ford car model over here; not a GMC pickup) and Focuses. But they weren't necessarily what we think of. The Fiestas were mostly a few decades old and had model numbers like GT1300, RS1600 and RS2000. One of the vehicles, which looked more or less the same as the others, was labeled a Pinto, but it wasn't like our Pinto of '70s notoriety. Instead it was a small two-door sedan.

I had another pot of tea later at the Deux Baronnes, and this time I sketched while there. 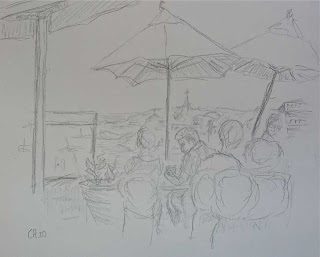 Then I had my little supper of tuna, applesauce and Pringle's at Upper Barrakka where a sort of fair was going on, promoting conservation and local farmers and so on. One booth sold a bunch of different kinds of tea, another had ceramics and other household items, one had displays about how many liters of water it takes to get various kinds of food to market. I did a little people-watching and a little reading, and then headed back to the guesthouse for shower and "personals" washing.
Posted by Cooper Renner at 12:35 PM

Arabic looks so odd when it is transliterated into what one of my professors calls "Christian."