You will laugh when I tell you that perhaps the highlight of the day was a quick trip to the Cass art store. I was directed there by a clerk at Waterstone's bookstore after asking if they had blank books or sketch books. The weather was unpleasant, of course, and I hadn't brought my pencils or drawing book with me from the hotel, so I thought it might be nice to sit in the National Gallery and draw.

Cass is great. Great prices--a lot of the stuff in the store was marked way down--and great stuff: slim drawing books of only 20 sheets or so with high quality paper; thicker, full-scale drawing books, either with hardbacks or spiral spines; and so forth. I could have bought several, without spending much money, if I weren't worried about my suitcase being overweight. As it was, I bought two of the slim books, sized about like a piece of typing paper; a 2B pencil; a sharpener and an eraser. All for about 5 pounds. Then I headed over to the Gallery, browsed around a bit, and ended up doing a couple of sketches.

Earlier in the day, I tried to take my jeans to the laundry not far from the hotel, only to find out that it was closed for the "banker's holiday." Why laundries get to close for banker's holidays, I don't know, and I wish the woman had thought to mention it to me the other day when I stopped in there to ask about getting clothes washed. Was there a sign on the day saying "Closed On Monday for the Banker's Holiday"? No. And in fact none of the shops I saw closed today had such a sign. One of them even had the "OPEN" sign prominently displayed in the doorway, even though the store was closed.

So instead of dropping off the jeans, which I have had to wear so often here in London that they can almost walk on their own, I had to had back to the hotel to drop them off. Then I trundled on to the Sherlock Holmes Museum, not to visit the museum again, but rather to buy something appropriately Sherlock-y at a niece's request: I decided the A. Conan Doyle 150th anniversary "first day of issue" stamped envelope, addressed to Sherlock Holmes, would be appropriate. If she doesn't like it, I'll keep it. The museum and store, fortunately, were open.

Then I decided to press on toward the British Library, hoping it would be open. I wasn't quite ready for my morning tea, so I passed by the cafes on Baker Street, which were also open, and headed on up Marylebone Road and then Euston Road toward the library. As I got closer to the library, I was ready for morning tea--and sitting somewhere warm--but along that stretch of road there were not many coffee shops or cafes, until I came to Euston Road train station, where there were quite a few. I sat in Pret a Manger--which was actually warm enough inside that they had the door propped open--and had tea and a croissant. I rested and read for a while, then went across the plaza to the Krispy Kreme stand (the first I've seen in London) and got an "original glazed" donut--not nearly as good cold as they are when they come hot off the conveyor belt at a real store, like I used to get in El Paso.

By this time the British Library was pretty close, and it was open! This statue is out in front, and it made me think of the William Blake paintings of the measuring god he called Urizen. I didn't see the sculptor's name or whether he was inspired by Blake or not. 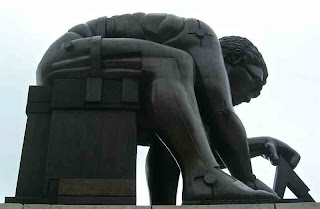 At least the exhibits were open. The reading rooms, which I had hoped to visit, were not--and I may not have time to use them anyway. One has to "join" to get a reading pass, and then it may take as long as 48 hours to have the books one wants brought up out of storage. I had hoped to see if they had some 19th century copies of some of John Polidori's books, which seem to have vanished off the face of the earth, except, of course, for "The Vampyre", which I have no need to see. But the online catalogs were closed for the banker's holiday too, so I don't even know if they will have the books. I may be able to search online tonight, when I get connected to the Internet.

So the British Library, like the laundy, was a bit of a disappointment. As I sad, however, the exhibits were open, and that saved the long walk from being an utter failure. A large exhibit room features "Treasures of the British Library," some of which are treasures indeed. The Library owns two of the 4 existing copies of the Magna Carta (1215), considered one of the foundation documents of English (and hence American) democracy, though only one of them is on display right now. One of the other two is in the Salisbury Cathedral, and I saw that one in 2007, so I've seen 2 of the 4 copies now. The Library also has a copy of the 1225 version of the Magna Carta, issued by King Edward III, son of King John, who was forced to issue the original one.

There is also Thomas Hardy's original manuscript of "Tess of the Durbervilles" which I'm reading at the moment; a bunch of Shakespeare and Shakespeare-related stuff; illuminated manuscripts; a Gutenberg Bible (there's also one at the University of Texas); and even the manuscript of "Beowulf." Quite a cool place. There is also this very cool painting outside the exhibition rooms, called "Paradoxymoron." I don't, unfortunately, remember the artist's name. This is a photo of the painting seen from directly in front. 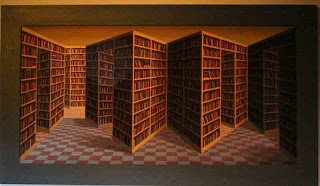 And now I'm standing off to the right a bit: 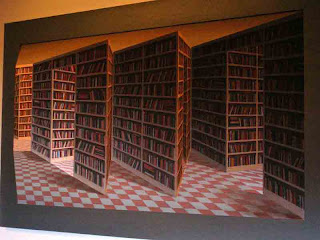 And now I'm off to the left a bit: 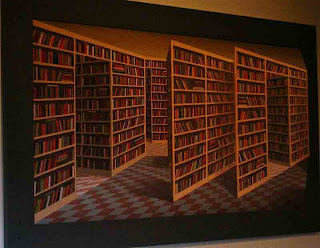 And now I'm standing almost directly to the left side. You can see that the painting is not flat, and the angles of the various panels create the optical illusion that you are moving past an actual set of shelves. Very cool. 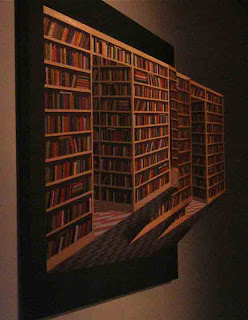 By the time I left the museum I was ready for lunch, and I kept looking for some place I could get a baked potato. This is not a part of London I'm at all familiar with, so I was using the map and hoping for the best. Finally, near the Goodge Street Underground station, I found a place. It wasn't the best baked potato I have ever had, but it took the edge off my hunger at least.

Then I took a bit of a walk to find the street sign for Goodge Street itself, rather than the train station. If you ever liked the old folky-jazzy Donovan music, before the days of "Sunshine Superman," perhaps you'll remember "Sunny Goodge Street." Needless to say, Goodge Street was not sunny today. 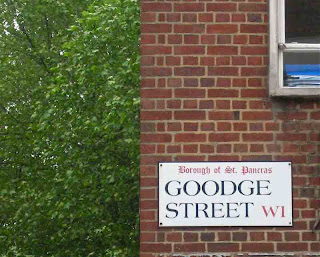 And given the fairly dreadful weather, I thought I could do worse than spend some time in the British Museum, not far away now. As I walked toward, I saw Bedford Square on my map, and thought I might as well walk past it, since I was in the neighborhood. I made the entire circuit of the square, looking for the historical markers, but the only one I took a photo of was for Anthony Hope, author of "Prisoner of Zenda", who lived on Bedford Square for a while. The gardens in the center of the square are, by the way, private, and you have to have a key to get into them. There were lots of "TO LET" signs on the square, however, so maybe you will take out a lease and get a key.

Here's a historical marker I photographed elsewhere in the neighborhood, maybe on Tottenham Court Road, which turns into Charing Cross Road, which sort of turns into Whitehall. I believe this building is a hotel now, but it may not have been when H.G. Wells lived there. 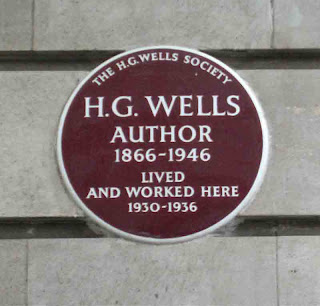 It was starting to drizzle as I approached the British Museum, and that's when I got the idea it would be good to get some drawing materials and sit inside and sketch. But I wasn't terribly impressed with what the BM shops had to offer--nothing as good as the Tate Britain shops, that's for sure!--and then, while I was looking, the sun came out! I know because I was in the shop in the great court of the Museum which has skylights. So I left the museum and headed out. I figured I could enjoy the sunlight and get some drawing stuff at one of the bookstores down on Charing Cross. I made it to Blackwell's in a few minutes, and it was actually beginning to feel warm enough that I thought I might be able to take the sweatshirt off. I was looking at the stuff in Blackwell's, sort of nice, but not exactly what I wanted, so I thought, "Well, I'll just zip down to Waterstone's", and I stepped outside, and the sun was gone. Maybe 15 minutes, maybe 20 minutes, all together. And it never came back either. Sigh.

Well, you already know that Waterstone's didn't have what I wanted, but they directed me to Cass. After I left the National Gallery and started my walk to Marks & Spencer for supper and then the hotel for the evening, I took a photo of this "ship in a bottle" outside the Gallery at Trafalgar Square. It's up on a huge platform which had, I think, a torso of a woman on it when I was here in 2007. That's Admiral Nelson on his column in the background. 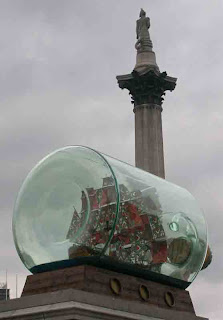 Well, if the forecasters are right, tomorrow will be just as cold as today, with the added "benefit" of showers. THEN, IF they are right, it might actually get into the low 70s on Wednesday. With sunlight. I won't hold my breath. The warmest it's been in London so far is 66, and that was Friday afternoon while I was in the theatre watching "Dirty Dancing." Tomorrow I may go see "The 39 Steps". There certainly won't be any reason to hang around outside. Tata.
Posted by Cooper Renner at 1:04 PM