This evening I watched Keiichi Iwasaki perform magic on Republic Street, the main street of Valletta. Keiichi is bicycling around the world, earning money as he goes by doing magic. He left Japan in 2002, for what he initially planned as a ten-year endeavor; now he says he'll maybe be done by 2015. 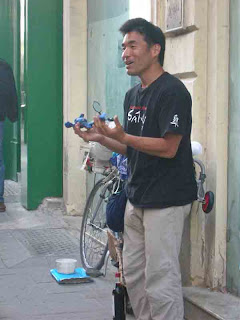 Since leaving Japan, he's been in 42 nations, including South Korea, China, Tibet and Nepal (where he climbed Mt Everest in 2005), India, Iran, and many of the countries of Europe. He came to Malta via Sicily where he intends to go again next, and then on to several other European nations before heading back to Middle Eastern nations he has missed, then Africa, South America and North America, with Alaska as the targeted last stop. His magic is a lot of fun and certainly pleasing the audience.

Earlier today I spent a good deal of time, on three separate occasions, watching some of the cars in tomorrow's Valletta Grand Prix in their "Motor Sprint Run." (This was not, as far as I could tell, an actual competition.) The major part of the course seems to be on the "ring road", often close to the water and outside the main city walls. My first viewpoint was at a curve in the road, right near Marsamxett Harbour where the Valletta-Sliema ferry runs, where I struck up a conversation with a Maltese-Australian who was also there taking photographs. He said he was pretty sure there had been a wreck not too long before I came along. A Volkswagen had fishtailed at the curve where it first came into view, then at the sharp curve right near where we stood it had actually done a three-sixty. Not long after it passed on and out of sight, they stopped more vehicles coming for a while and an ambulance came through. We never knew saw the VW again, so we're assuming the driver wiped out somewhere. Maybe it will be in tomorrow's papers.

After taking quite a number of photos and having a good conversation with the other man, I went on to lunch, stopping in at Hollywood Grocery (one of my prior hangouts) for a bag of chips, some ham and a Coca-Cola to supplement my tomato juice and apple. I had my lunch at Hastings Gardens, near Valletta's main gate, so after eating, I went out to the bus terminus where they were letting folks sit on the Triton fountain and watch as some of the race cars came around the circle there. Here I visited with a Danish-Scottish couple. In this case the wife seemed as entertained by the cars as the husband, which was not the case with the Maltese-Australian's wife.

My final vantage point for the day was at the Lower Barrakka Gardens, high on the city walls above the ring road near what would be sort of the southeast corner of the city (and the peninsula it's on). Along the way I stopped a couple of other places briefly and took the photo of the classic Jaguar cresting a hill near (if I'm remembering the name correctly) the Siege Bell Monument. 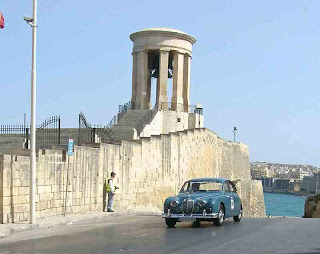 From Lower Barrakka, on the other hand, it was possible to take photos of the cars from above, where they looked very tiny, and I'll include one of those shots here. 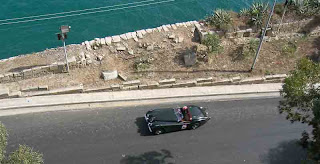 In amongst these other activities, I also had time to draw, read and visit Marks & Spencer twice for tea. A good day, though a bit windy and chilly.
Posted by Cooper Renner at 1:28 PM