First Full Day in Malta, May 15

Today, for the first time in my life, I woke up on the island of Malta. Here's a photo of the hotel room: 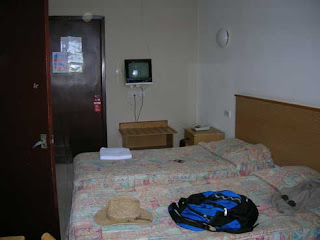 And here's a photo of the view from the balcony of my hotel room: 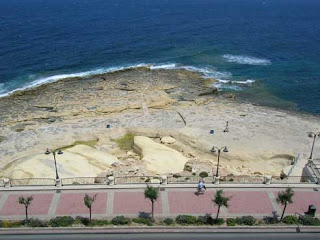 What do you think?

I'm still feeling kind of disoriented and sort of up-and-down, at one moment thinking, "Why did I plan out at least five months of travel during which I would be on my own almost all of the time?" and at another thinking, "Wow, this (whatever this happens to be) is really cool.

Probably the coolest of the cool things today (besides getting to do about 2 hours of Internet time, catching up on email and working on the Travel Log and elimae) was seeing St. John's Co-Cathedral in Valletta. Valletta is the capital of Malta, but it's no longer the most populous or most "happening" place. Sliema (where I'm staying) is one of the happening places--especially, I gather, for tourists--and not many kilometers from here is Paceville (I'm not sure I've spelled that right), which is the place where the younger locals go to the nightclubs. I'm glad I'm not in a hotel over there!

This is a photo that I took from the seawall in Sliema, looking across the harbor to Valletta: 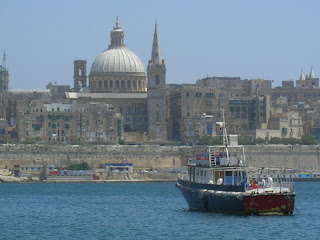 Anyway, the co-cathedral (and please don't ask me what that "co" means: if one of you knows, you can explain to us all in a comment) is still an active church with masses taking place, but it was once the church of the Knights of Malta, which are the same thing as the Knights of St. John, I think. As one of the guides told me, it is in a very real sense a cemetery. Apparently almost all of the ground underfoot, the floor that one is walking upon, consists of tombstones. I could see a few undecorated places, which I guess were spots still waiting to be filled when the Knights quit burying here. (Do they still exist? I don't know.) The tombstones are elaboratedly decorated, with (as the audio guide points out) lots of skulls and bones in sight, inscribed in Latin telling about the knight who is buried underneath. One is, yes, walking on graves. I didn't take any photos, unfortunately. I was not much in the photo mood, for one thing, but just as importantly is a strict ban on flash photography inside the cathedral, and I'm not always sure when my camera is going to flash or not--so I was leery of getting yelled at for being crass.

The cathedral is not just decorated on the floors, either. The chapels have paintings hanging in them and paintings on the walls as well. The walls themselves are very elaborately worked too, carved into all sorts of designs and scenes. It's very difficult to find an undecorated surface. Quite an amazing place. But those of you who know about the cathedral are probably saying, "When is he going to mention the Caravaggio?" Caravaggio's largest painting hangs in the oratory here, and Caravaggio was, for a short time, one of the Knights himself. The painting depicts the beheading of John the Baptist, the patron saint of the Knights, and is mostly in very muted and dark colors, except for the red mantle of John, thrown across his "private areas" as he is otherwise unclothed for the execution, and the green mantle or jacket worn by the guy ordering the executioner to finish the job. In the scene, John has already been cut once, and blood is flowing, but his head is not yet severed. Caravaggio signed this painting in the flowing blood, and it's the only painting that he signed. On the right, in the background, two prisoners are looking out through their bars at the scene, and on the left in the foreground are an old and a young woman. Some take the younger woman to be Salome, holds a large basin to receive the head when the job is done. It is a massive painting, covering almost all of the upper rear wall of the oratory. I'm going to guess that it's at least 30 feet wide and 20 feet tall, but it may be even bigger. I just can't tell. In any case, it's bigger than my 200 sq. ft. Euroway travel trailer was!

The oratory also features another Caravaggio, this one of St. Jerome. It's a more normal-sized painting and rests in the back of the oratory. One can get a lot closer to it, but as it's behind glass, it's hard to get an angle on it without a glare.

While in Valletta, I also found a cool little Internet cafe, which lets you use its wifi free as long as you buy something, so I tidied up some email there and checked my bank account. I would probably be going there every morning if it were closer to my hotel, but Valletta is a bit far. The people were very welcoming, and I think I would enjoy having them as my "home cafe" for the next few weeks.

The St. Paul Shipwrecked Church is also in Valletta. It is dedicated to the memory (I don't think I'm saying that correctly) of the time St. Paul was shipwrecked on Malta and taught the people while he was there. This was while he was on his way to Rome for trial. It is smaller than the cathedral but also elaborately decorated. It also claims to have part of the pillar upon which St. Paul was beheaded, as well as a wrist bone (or part of a wrist bone) of another saint. I can't remember now who it is--St. Joseph maybe? Shame on me. The church is built into a very narrow street with buildings on both sides, so you can't really get a distant view of it. The same is pretty much true of the cathedral. There's a bit of a plaza on the side, where one can step back and get a bit of a photo, but the building is very stark and plain. The main facade is on a narrow street.

The picture here is of a church facing the harbor between Sliema and Valletta. At least I assume it's a church. I took the picture from the seawall (called the Strand). 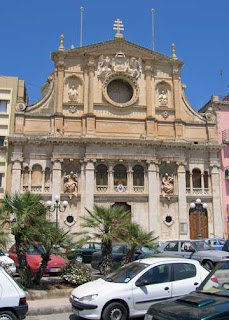 I took the ferry to and from Sliema-Valletta. It takes about 5 minutes each way. I'm thinking of going back tomorrow and just walking the whole way, maybe a mile and a half each way? I'm not sure. I may know by this time tomorrow, eh?

I wandered in three or four bookstores today, none of them "superstores" like we are used too, and none of them with a cafe. Rats. (Although one is in a mall called the Plaza, near Stella's Cafe which is supposed to be good.) Books aren't cheap here, and I may hold off buying anything until I finish the Spanish translation of Doyle I bought in Barcelona. Or I may buy something, so I can go back and forth between English and Spanish. One store I stumbled across in Valletta has a lot of remaindered books, so I could save some money that way, if I wanted to buy, for example, Monsoon by Wilbur Smith or Dickens's Nicholas Nickelby. None of the stores has a great selection, because--let's face it--Malta doesn't have a huge population, but there were interesting books in all of them.

On my way downstairs for a late evening walk, I had a nice chat with one of the guys who works here. He was walking up with a backpack, and we realized that we recognized eachc other, so I asked him if he both lived and worked here. He explained that he was in university in Poitiers, France, and that he had to live/work out of the country for three months as part of his degree. So he is working here at the hotel to fulfill that requirement. He isn't paid, but is given a room, breakfast and supper instead. We talked a little about my plans, and he recommended that I visit Nantes and Bordeaux as I work my way south from St-Malo to Spain. He said one of his friends from the university had just arrived today, and they planned to meet tonight to visit. As I returned down the seawall from my walk, I passed him again as he headed out to meet his buddy.
Posted by Cooper Renner at 8:04 AM

It's not a common thing, but it isn't unheard of that a bishop seat will have two cathedrals (thus co-cathedral). I'll bet there's some interesting story behind each one (in terms of power struggles and all).

I think you'll find that traveling alone you're more likely to meet people and also to have conversations you wouldn't have had otherwise. I once had a conversation with a couple of bus drivers in Key West about the relationship between Rocky and Bullwinkle and what Rocky's sexual orientation was. In Horley (near Heathrow) I sat at a table for tea with a woman in her 80s or 90s who was a proclaimed Thatcherite, and also complained how hard it was to find a boyfriend these days. In New York I had a Pakistani cab driver who said maybe he'd move to Texas, that maybe it was more "American"--that there were just too many foreigners in NY.

Enjoying the commentary and the pictures.

Tell us about the climate and more about what you're eating.

enjoyed your first impressions, had no idea about the Caravagio (by the way i think in the menu, on any other setting but auto, you get a museum option, which disables the flash, either that or the flash /macro dial to the right of the screen has flash disable - re the camera).
Is it windy there? it is every afternoon here.