This morning I strolled along a section of the seawall where I hadn't walked before. There are two completely enclosed "rock pools" there (one of which is pictured below) 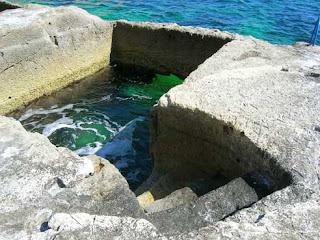 as well as other partially enclosed pools, with steps cut out of the rock or metal pool stairs going down into the water. 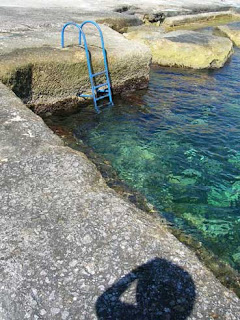 The two enclosed pools are actually attached to the sea as well, but through an opening under the water level. Even inside the pools, the water surges up and down.

Perhaps the most colorful character I've met on this trip so far is a Maltese-Australian man (born in Malta, but at some point emigrated to Australia) who is staying at the Europa. He said he used to swim in these pools as a boy. He is currently in Malta for a wedding and then plans to go to Istanbul, with the intention of buying a large sailboat (with two diesel engines). He has negotiated a price over the Internet/email with the seller, but won't make up his mind for sure until he sees it. If he buys, then he will have to hire a crew and take several weeks sailing it back to Australia. He said he has an engineering company in Australia, and he's getting ready to retire in a couple of years and turn it over to his son. He wants to completely redo this ship and start his own "Windjammer"-type cruise company sailing in the Southwestern Pacific out of Australia. The boat has both double and single bedrooms and a room for the crew. This man, who is probably a little older than I am, mostly wears tank tops: his upper arms are covered with tattoos. He has a sort of British look and coloring, except that he is very deeply tanned. He's full of opinions about the tax rate for upper income folks in Australia and about the government assistance the Maltese receive. On the other hand, he has said that a typical Maltese citizen only makes about 80 Maltese liras a week (somewhere in the neighborhood of $250), which makes the 200 liras-a-month apartment I saw posted a pretty steep proposition.

My first "conversation with a stranger" today took place a little further along. The woman is from England and is here with several friends. They are on a package deal, almost like a cruise. They are staying at a hotel called Plevna, and their package includes three meals a day, usage of the hotel's beach club, and drinks (she didn't say if she meant alcoholic or not, but I'd guess not) throughout the day. I had walked down the staircase into the beach club, just to see if the public sidewalk continued that way (it didn't), and was coming back up as she was coming down. Overlooking the sea, the beach club has a pool, a wide deck for sunbathing, and some kind of snack bar. From what she said, they pay significantly more than I do, but they get lunch and dinner for it, which might mean that a "normal" person, who can eat regular food, could save money on the deal! She certainly spoke highly of the place.

It was right in that same area that I had this reminder of El Paso: iceplant hanging down a wall: 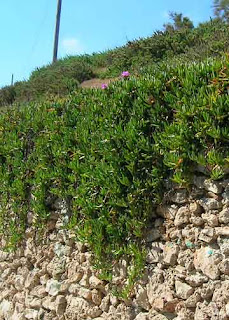 This building was in the same neighborhood as well, but almost right across the street from the harbor, on the other side of the peninsula: 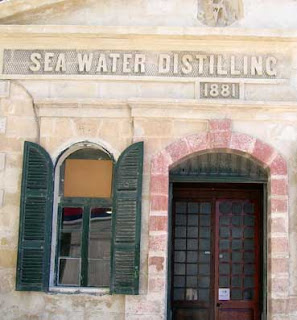 After lunch back at the hotel, I spent an hour or so browsing what is so far the best bookstore I've seen here (and, no, I haven't seen them all, believe it or not). Books Plus is small, like most stores here, but is very nicely laid out. It's on two floors, and the staircase that leads up to the second floor features a plate glass half-wall along the stairs, with stainless steel banister, as well as a mirror wall to the side, making the store look twice as big and quite bright (and also making one catch a glimpse of oneself out of the corner of one's eye and wonder if someone is approaching). What distinguishes the store, besides its design, is its inclusion of poetry, apparently not in high demand here, and a nice selection of "classics" published in the Wordsworth line from the UK which are priced at only 99 Maltese cents--quite a bargain for this neck of the woods. They also have an edition of Coleridge's poems with a long introduction by Ted Hughes, the late poet laureate of England.

This evening, on my way up the stairs from a short walk and reading-on-the-Strand time, I got into a conversation with a young couple I've run into several times here. He is Spanish (Galician, actually) and she is Italian. They have been living in London, where they went specifically because she wanted to learn English. (She already knows French as well, and he also speaks Portuguese and English, and probably Galician.) She is interested in working in the travel industry, and he has already trained as a chef. They had thought Malta might be a place worth relocating to, but changed their minds after spending this trip here. They don't feel (remember that they are young) that there is enough to do here, and they are also not excited about the number of buildings still in ruins, even with all the construction going on. She said they would probably end up in Italy, where her employer in London can transfer here. With his skills as a chef, he can pretty well work anywhere. He also gave me contact information for his father, when I mentioned that I would be going to Spain, because his father has a hostel in Santiago de Compostela, a prominent tourist and pilgrimage site in Northwestern Spain. The hostel (not a hostel in the "youth hostel" sense; more like a bed-and-breakfast) is probably more expensive than I can afford for more than a night or two, but he recommended I go and see it, even if I don't stay there: he said the building is beautiful. He said his father might be able to give me a discount if I mention that his son sent me, but that that would be difficult in summer.

I need to end today's post on a somber note. Last week, quite unexpectedly, my brother-in-law's mother passed away of a heart attack, though she had no known heart condition. The funeral took place today. I ask you all to send your warm thoughts to Bryan, his father Jim, and his sister Melanie.
Posted by Cooper Renner at 7:51 AM

Warm thoughts for you and your family members, from me in KC. Let happy moments of the past reside. I'm sorry for your loss.
Best Ragards
R

Pardon, please, Cooper.
I thought I'd edited. 'Regards.' (Typing!) And a heart-felt thought waylaid. A thousand pardons, if you can allow. The warm thoughts are very much there.

sorry for your and your families loss, unexpected is that much more devastating.

I'm interested in that sea water distilling building, is it still active? and does that provide fresh water? What is the fresh water situation in Malta?
Regardless its a beautiful facade.

Thanks for your kind thoughts. It will be especially hard on my brother-in-law and his father and sister for a long time to come.

I'm not sure if the Distillation is still going on, but something is happening in the building. It's not abandoned. Apparently Malta's water comes from the water table and from distillation.