The highlight of today's sightseeing--and what may well turn out to be the highlight of the trip to Malta--was the Hypogeum. If one visits Malta, one must see the Hypogeum. If one loves Stone Age cultures and prehistoric buildings, one probably ought to schedule some time in Malta specifically to see the Hypogeum. Only 70 people a day are allowed inside--7 tours of 10 people each--so if you're making a quick trip to Malta, go to the Heritage Malta website ahead of time and buy your ticket online. I went to the Museum of Archaeology last Wednesday, and today--8 days later--was the earliest I could visit, and this is not even quite the "high season" yet, though it's approaching rapidly.

The Hypogeum was, apparently, an in-ground temple. It was also a cemetery of some sort, though scholars say that the remains (mostly in mass graves, jumbled together) of 7000 people buried here over a period of 1000 years means that not very many people were buried here at a time: perhaps they were priests or priestesses. Like the Tarxien temples, it was abandoned about 4500 years ago, though it was worked on and expanded for a longer period of time. I can't remember if the guide said six or seven thousand years ago for its beginning. (The Rough Guide says 3600 BCE, but for some reason my mind is saying that's not what the guide said.)

The first, oldest area of the Hypogeum was originally open to the sky, a sort of sunken building or temple, but as the people continued to work on it, they went further into the ground, creating or adapting a cavern. The tour itself is kind of frustrating. On the one hand, you are led through it by a guide, who supplements (sometimes by snapping and pointing) the recorder/player you are holding to your ear to listen to the prerecorded information. This means that dawdling, to further ponder what you are seeing, is impossible. It's also true that even though there are only 11 of you--a guide and 10 tourists--in the Hypogeum at a time, the walkways and viewpoints are relatively cramped and there are inevitably things you will not quite be able to see because of the other people crowded in around you. On the other hand, the Hypogeum, one of the oldest buildings on earth, is itself just amazing. The light is kept low, of course, to fight against the growth of algae, and this contributes to the sort of "holy" atmosphere of being in the place, moving along on (sometimes elevated) walkways through narrow passageways, stooping to see through an open "window" or "door" into another chamber, looking up to see the red ochre spirals painted on the ceiling. According to the guide, the scholars think that Stone Age people may have used red ochre to indicate blood or life, and they consider the spirals significant, even with no idea of what they might have meant, simply because they are symbolic and not representative of a particular object: a kind of writing, I suppose.

There is, at the furthest point (or one of the furthest points?) in the descent, a "room" they call the "Holy of Holies". It is, as the guide points out, a sculptural representation of architecture--that is, it is a carving, out of the native rock, of a temple, which therefore provides information to archaeologists about how the above-ground, ruined temples may have looked when they were whole: apparently circular, with a sequence of progressively smaller, recessed roofs. Photography is strictly forbidden, of course, and this is my little drawing of the Holy of Holies. I'm pretty sure my circularity is exaggerated, and the rest of it is an approximation, working from memory (as I sat outside the Tarxien temples) and with a less-than-perfect drawing hand. The Holy of Holies itself is not terribly large. It's hard to judge, gawking at it from a number of feet away and through an opening, but I'd say the columns of the "sculpture" are no more than 6 feet high, and maybe are actually less. 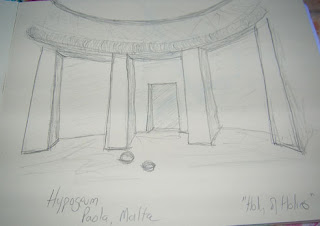 In one hallway, the guide points out openings which were apparently doorways, though they look more the size of windows and are above the surface of the cavern. But scholars hypothesize that there was dirt in the cave when it was used (perhaps with the bones of the dead in the dirt!), making the doorways at ground level at that time.

Unlike the Tarxien temples, a great deal of money has been spent to preserve the Hypogeum and present it to the public in an attractive and meaningful way. It is a UNESCO World Heritage site and well deserves it. The "intro" room that the tour goes through first has several large "poster walls", in English and Maltí, explaining about the site and its discovery and displays of some of the material (or replicas) found in the Hypogeum. From the intro room, the tour goes into a small theater for a short film discussing the Hypogeum and what scholars think about it. Then the tour itself begins. The site first became known to scholars in 1902, though there is a theory that it was actually discovered in 1899 and not reported for three years. (Exactly why this is theorized must be in the book.) Its discovery is owed to men digging a cistern for a house and breaking through into the Hypogeum. We were told that four houses had to be removed to preserve and explore the site, which is, like the Tarxien temples, right in the middle of a town, with streets and buildings on all sides.

The most famous object from the Hypogeum, which is now housed in the Museum of Archaelogy, is called "the Sleeping Woman." A very small figure, smaller than most dolls, it depicts a woman/priestess/goddess, with a rather small upper body and an enormous lower body, sleeping on her side. The "intro room" has a replica of it.

How about the employees at the Hypogeum? A mixed bag: a little bit bossy and snappish, while also obliging and helpful. Our personal guide (as opposed to the pre-recorded guide) reminded me of a man leading an elementary school field trip. When I first arrived at the lobby, I was ahead of my pre-arranged ticket time and started asking if I should go wander around outside for a while or-- and the man behind the counter said, "Why are you shouting at me?" I think most of you would agree that a shout isn't my normal tone of voice (and maybe I should have said, "If I'm shouting, it's because I just walked in off a Maltese street and just got off a Maltese bus and I can't hear." But I didn't.) Then when they realized I had an 11 o'clock ticket, they rushed me in to join the 10 o'clock tour, which had an opening, telling me that I could make up what I had missed with the 11 o'clock group (and also allowing them to resell my 11 o'clock spot!) They also made fun of my famous hat, asking me where I had left the horse!

Yes, yes, you are all thinking, "Enough with the cemeteries." But while in the Paola/Tarxien area, I took the opportunity to visit the Santa Marija Addolorata cemetery. The name, I presume, is the Maltí version of Saint Mary Dolorosa. It is an enormous cemetery, located on a long sloping hill, with a small-cathedral-sized church in the middle of it, near the crest of the hill. In addition to "normal" tombstones, there are also multitudes of graves with sculptural decorations and lots of small buildings I presume to be family crypts or mausolea.

This is a shot looking up the hill at the church: 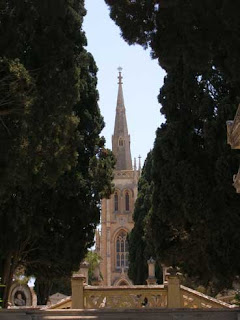 As I continued the climb from the downhill entry toward the uprearing church, I came across a large family tomb-marker, with this remarkable bas-relief sculpture in the center of it. I wonder what you will make of it. I thought perhaps it is the Angel of Death leading away the resisting Spirit of Life. It made me think of William Blake's artwork. 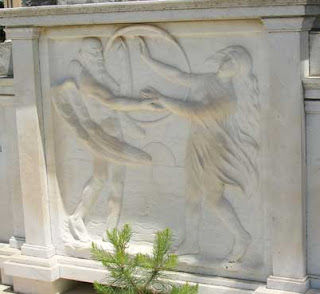 This group area puzzled me a bit. Surely not all of these men are buried at this spot. I'm assuming the small markers are memorial markers rather than indications of standing graves or something similar. But what an interesting thing to want to commemorate in a cemetery: 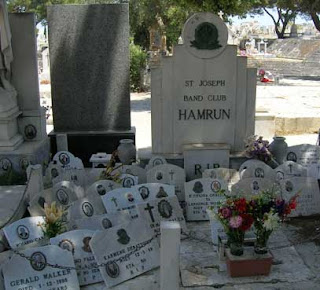 I also came across a German couple who were both painting, with acrylics on art paper, in the cemetery. The man was painting a view of a family crypt there near him, and the woman was working on a representation of an angelic sculpture. I wish I had their skills! They said this was their first trip to Malta, but that they intended to return in the fall.

And here is a photo of me, with one of the Tarxien stones behind me, for those of you who have been wondering if I have grown a beard, or had my entire face tattooed, or lost an eye in a shaving accident! I do apologize for the goofy grin and the weird angle of my head. Taking one's own photo is a bit of a problem: 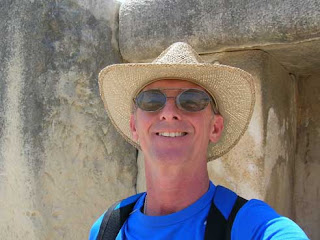 Posted by Cooper Renner at 5:04 AM

"Surely not all of these men are buried at this spot."

As a matter of fact, they are. I do not know whether this is also available abroad, but since we have very little space for burials, we have what we call communal tombs. Those persons who are not rich enough to buy their own family tomb (and trust me, it is very expensive to have one, so most people opt for this option) are buried in a communal tomb. What happens is that after 2 years, the remains of the body are collected and placed either in a bag or in a box (again, it depends on how much you want to spend), and these are interred again in the tomb, hence creating space for new burials. To be quite honest, I am not sure whether ossuaries are still used in Malta, however it is highly probably that after a certain amount of years have passed, the remains are then placed in an ossuary, but the marker would be still left in place.

Also, I don't know whether you have noticed, but in that particular cemetery (which is the largest on the island, and caters for all of those towns and villages that do not have their own cemetery), there are groupings according to a saint usually either the patron saint of the village the dead person came from or a particular religious fraternity. In such cases, communal tombs are definitely necessary!

Sorry for writing so much, but I hope it helps you to understand what's behind all those markers gathered in one tiny space :)

I don't know you--but I was looking up the Hypogeum and thought your blog was excellent!