Museum of Archaeology and the Silent Warriors

Consumer Flash!: Next time you're in Italy (or Malta), buy yourself a package of GS brand "Biscotti con Mais" (cookies with corn). The main ingredient is "farina di frumento" (flour of whatever-the-heck-frumento-is), but 21% is corn flour! And boy, do they make for good snacking!

Check the hood on this beauty: it's a Ford. What year, I wonder? 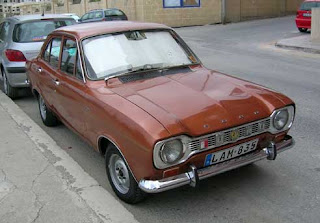 And this photo is a gift for Deron. Parked in a dead-end passage between two multi-floor buildings, a lovely Alfa Romeo: 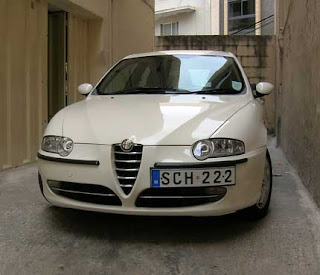 Malta's Museum of Archaeology is small but a great visit. The first floor is about Malta's prehistory: the Hypogeum and the temple complexes at Tarxien, Haggar Qim and other places, with instructive panels to place what happened on Malta within the larger context of the spread of agriculture and the ending of the Ice Age. (Once upon a time, during the Ice Age, Malta was attached to Sicily!) On display here are artifacts both large and small from the various sites on Malta and Gozo, some -- at least -- brought in specifically for protection from the elements. There are several beautiful examples, carved on limestone, of the spiral and faux-spiral motifs so prevalent here. As one of the panels points out, not all of the carvings which look like spirals at first glance actually are. Some of more like Cs worked in together. A particularly nice example, on a monolith at least eight feet long, I'd guess, features two long horizontal lines, one above the other, of arcs or C-shapes: working together as they do, they suggested to me a line of horned animals moving across the stone face. I tried to draw it, but the drawing is pretty awful. Other stones are much more clearly abstracted shapes -- just spirals and arcs, as in one or two of the photos I posted from the Tarxien temples.

Right as one comes into the main gallery, one faces a large stone-carved cup, big enough to be used by the Fee-Fie-Fo-Fum giant at the top of the beanstalk. My guess is that it's about 30 inches across. It's not perfectly shaped, as there's a definite lean to one side, and it has no bottom in it now, though I suppose it might once have. But yes, it has to be seen as a cup, and not a cauldron or small cistern, because it has a handle on one side. Judging from the cracks running through it, archaeologists had to reassemble the pieces. This is my drawing of it: 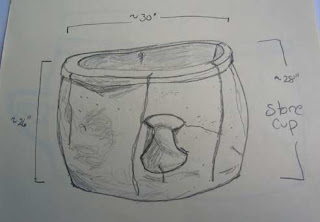 The first large gallery, with so many examples of carved and pitted stones, also features several oversized photographs from early expeditions, allowing one to see what some of the sites looked like 80-90 years ago, when archaeologists were first working at the locations.

Perhaps more exciting than the large stones are the small finds from the various sites: various tools of stone, bone or horn; pottery shards; and various carved figures. I tried to draw some of these, but couldn't get a result I was happy with. There are small animal figurines and, especially, figures of women or goddesses. Many of these exemplify what is, I suppose, the Stone Age Maltese style: enormously fat women, often with the most delicately (and simply) rendered small hands. The hips and legs are particularly exaggerated, making for small upper bodies and inflated lower bodies. One of them, which seemed to be a sitting figure, reminded me of a Victorian woman with an enormous skirt spread out around her. The statues are of various sizes (and could be quite large, if you'll recall the photo from Tarxien which shows the surviving lower limbs and skirt of a huge woman). The most famous of these Maltese women is the Sleeping Lady, found at the Hypogeum but housed at the museum in Valletta now. It's a small carving of a woman lying on her side, apparently sleeping, and again exhibiting the small upper body and the wildly inflated lower body. It's really quite charming, and a few other carvings of figures on beds have been found as well. Workers have also found a number of phallic symbols, the most unusual of which is a grouping of three. One can only imagine what kind of cultic or religious significance that might have had.

The second floor of the museum currently offers a traveling exhibition, the "Silent Warriors" of China. I suppose several variations of this exhibit may be traveling the world right now. It explains and displays several of the large-scale terracotta soldiers and horses which were found in the tomb of the emperor who united China more than 2000 years ago, along with related smaller objects. The historical panels accompanying the exhibition explain that the tomb is still being excavated, more than 30 years after its discovery. Scholars estimate that there are 7000 of these soldiers in the tomb, though only 1000 have been uncovered to date. They are amazing pieces of work.

According to the information given, the bodies of the soldiers were produced on a kind of assembly line, but the shoulders (?), hands and heads were produced separately and then glued to the bodies. Each head is different and may represent an actual soldier of the Emperor's army. Various hair-styles are represented, and the men have different features and expressions. The real armor apparently was pinned or bolted together, though it's impossible to tell from the terracotta statues if it would have been metal or wood or even hardened leather. Not all are armored. They wear what look like knee-length tunics (or dresses, if you will), below which trousers hang down for another several inches. Below that you have either leg or legging--it's hard to tell in the low light of the museum.

In addition to two full-size (or larger?) horses, there is also a very interesting small-scale statue of a horse with a rider, whose body is either unfinished or somewhat abstracted, atop him. This horse's head is a remarkable piece of work, not quite realistic, with some of its features looking geometricized, as with modern art. It's possible, I suppose, that it might have been painted, long ago, to show that part of what looks almost mechanical about it was actually some sort of complicated bridle or armor. As it is, it reminds me almost of the sort of blend of "life" and "machine" you see in science fiction movies or illustrations.

Along with the soldiers and horses, there are smaller pieces of art, representative of China in or around the same time: incense burners, for example. Oddly enough, one of the things which moved me the most wasn't a piece of art at all: it is, instead, merely the name for an earlier period of Chinese history and it seemed to me yet another reminder of the grace and style which has characterized so much of Chinese culture. This time period is called the "Spring and Autumn Period," and it lasted more than 200 years. It makes one want to go read some more Chinese poetry.

Again, I am presuming that variations on this exhibit are traveling the world. (This one leaves Malta in August.) If you get the chance, by all means go see it. The skill that produced these soldiers will astonish you. And archaeologists, by the way, have found the enormous section of the tomb where the emperor's body ought somewhere to be, but they have not found the chamber where he is, presumably, still lying in state. Who knows what they might discover when that room is located?

The Mystery Deepens: The Bellower and His Family. This morning the Bellower and three people I presume to be his brother and his parents were having breakfast at the same time I was. The Bellower is older than I first took him to be, perhaps as old as 45. He is bear-ish: stocky, not fat; taller than I am, but not tall; very short crewcut. He looks like a former rugby player. But get this: he was sitting alone at a table with four chairs while his parents and brother were sitting at the next table, which would only seat three. Very odd. And I'm pretty sure the old man was speaking something other than English. So they may be yet another family with Maltese roots, but now living in England or Australia. The brother looks older, smaller, not at all like an ex-jock. The mother has short gray-white hair and is also smallish. The father is a bit stocky, shorter, sort of "old country"-looking. The Bellower himself actually seems to be capable of modulating his voice, though it's still one of those deep-ish voices which carries through bank vault doors. Sigh. (As I write, by the way, the Bellower and some/all of his family are in the room on the other side of me from where I have suspected the Bellower to actually be staying, with the television turned up loud enough to entertain the troops in South Korea, making the hallway practically echo. I seem to be the non-bellowing meat in a Bellowing-sandwich, with the lot of them on both sides of me. I can only hope they'll be moving along soon and will be replaced by other non-Bellowers.)

Here's my sketch of the plaque I wanted to "draw" the other day, the one that makes reference to Fascism and Nazism. Other than those two words, in the final line, there are what seem to be the word against (kontra); a reference to the Maltese (Lill-Maltin) and English (L-Inglizi), presumably working together, against Nazism and Fascism; and what seems to be a reference to a convoy (konvoj), although that may be totally something else. Maybe something like "In Memory (or Honor) of the Convoy of Santa Maria. . ." Your guess is as good as mine: 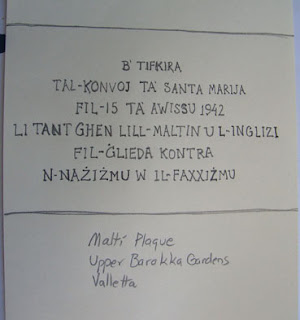 Posted by Cooper Renner at 7:17 AM

You are correct cooper The plaque does commentates the arrival of a convoy in Malta
is known as the convoy of Santa marjia to the maltase or operation pedestal to the British
Fourteen merchant ships set out with a large escort to supplely Malta from England
This had been one of many convoys forty one was a bloody year for the brits and the maltase
I941saw the British fighting of the Germans and Italians in the med
with Malta as key component to each sides plan for victory
Nine merchant ships are sunk along with one air craft carrier further damaged two cruisers and a destroyer and four damaged
Five merchant t ships arrive in Malta three of which are heavily damaged
With the arrival of the Pedestal convoy and the saving of Malta
from surrendering (planned for 31st. August) the day was declared a public holiday and still is today.
Church services always start with a thanksgiving prayer when the names of the five ships are read out. 61 years on

my father served on these convoys

I sit along in the dark bamboo grove,
playing the zither and whistling long.
in this deep dark wood no one would know –
only the bright moon comes to shine.

You also come from my home town,
you must know al the home town news.
at dawn, before the silken window,
It is to cold for the plum blossom to show


Cooper
three poems by Wang Wei
hope you enjoy them

Hey, Jack, thanks for the poems and all the comments. I hope folks are seeing your comments, and getting the extra history. Very impressive that your father served during the second great siege of Malta.

The (almost) literal translation of the plaque is: