My first stop this morning was St Catherine of Italy Church for an 11 a.m. performance of Baroque music on flute and harpsichord. Interestingly, the harpsichordist was the same young man I talked to yesterday at St James Cavalier about the construction of that building. According to the program, he's in his early 20s and composes as well as plays. The flutist looked to be 35 or 40. He's a college teacher here and has studied organ as well as flute and is also a choir conductor. They performed works by Vivaldi, Bach (scholars disagree as to which of the Bachs actually composed the work in question) and Handel, along with two composers I had not previously heard of--Valentine and Philidor. Valentine, the harpsichordist/host told us, was also a chess master who eventually decided to devote his energies to chess and not music.

The acoustics in the church were excellent. It is a small octagonal building, with extensions off the octagon. The main altar, for example, is a rectangle or square off one side of the octagon, as is the entrance. There is a small dome above the octagon, and the outside walls disguise the octagonal nature of what's inside. When the host spoke, he stood just slightly into the main octagon, and there was a bit of echo which sometimes made him hard to understand. The harpsichord was set up, however, exactly under the archway between octagon and altar room, and the flutist stood under the arch as well. When they played, the sound was perfect. The audience was perhaps 40 or 50 people, including a woman with two small boys, and though the older can't have been more than 5, I never heard a peep from them throughout the hour-long performance. It made me wonder if they were musical prodigies themselves, or if they have simply been very well-trained! The proceeds from the concert go to the fund for restoring the interior of the church, which needs a great deal of work, in terms of the paintings in the dome as well as the wall-painting and so forth. The exterior was restored a few years ago, and preliminary work is to begin on the interior soon, though we were assured the concerts would continue, even around the scaffolding.

St Catherine of Italy Church was, when the Knights still controlled the island, the church of those who spoke Italian. The Knights were divided into langues (language groups), and each langue had its own church. Their residence was, I gathered, behind (which is, I think, more or less, east) the church. Almost directly across the street is the Auberge de Castile, which I can only assume had been the headquarters of the Spanish-speaking knights. It is now the prime minister's offices (and perhaps a residence as well?) and is not open to the public.

As I was leaving the concert, a man asked me what I was drawing during the performance. He said at first he thought I was writing criticisms of the show, then realized that my hand was moving across the page in a non-writing manner. He was right--I thought it would be fun to try to draw a bit while I was listening, so I sketched out (with a rollerball--hardly an instrument for sketching, but it's what I had) the two musicians playing and the display case which contains a statue of St Catherine. The man and his wife are German, visiting Malta from Nürnberg, and staying right in Valletta, which I have often wished I had known enough to do. They highly recommended their bed & breakfast, called Asti. (Later I took a peek in the front door--locked!--and saw a beautiful old lobby with a limestone staircase going up the rear wall.) They also gave me their names and contact information, so that if/when I visit Nürnberg, they can help me find a good place to stay and make recommendations as to what to see. Very kind folks indeed.

I roamed the Lower Barakka Gardens again, reading a bit, and snapping this photo: 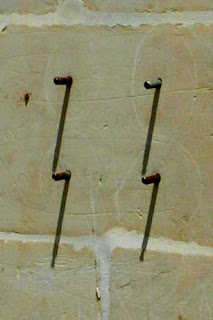 From a distance it looked to me almost like a chalked or painted "33", in a very stylized form, or even a gang-style logo. But of course it's actually a set of four screw- or bolt-housings with the shadows coming down perfectly, from where I sat, to make the 33. In my photo, unfortunately, I didn't get the angle exactly correct, and the 3s don't quite join in the middle.

Later I wandered past the Grand Master's Palace (or is the Armoury? Or maybe they're the same?) where the Grand Master of the Order lived, back in the old days. It now belongs to Parliament, I believe. There is a parking lot across the street, marked for members of Parliament only, and it is currently closed to the public, though normally it's open. I'm wondering if Parliament is in session, or if perhaps restoration work is going on inside. Anyway, this photo shows a look through the large entryway into the plaza inside the building. That appears to be good old Lord Poseidon standing in the plaza: 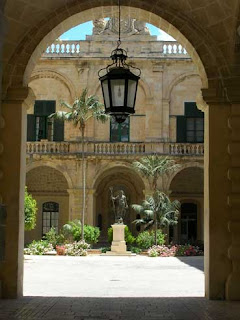 Both side-walls of the entryway feature commemorative plaques, which look to be made exactly like the tombstones in St John's Co-Cathedral. One commemorates a visit of Queen Elizabeth II and Prince Philip, and this one commemorates of visit of (you can read for yourselves): 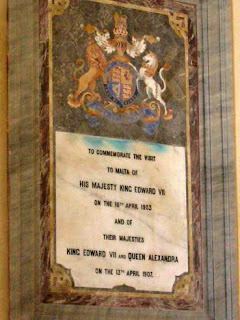 I took a long walk after returning to Sliema, going sort of north along the seawall, though because there are so many inlets here one might be going almost any direction at any given point. The buildings across the street from the seawall/Strand run the gamut from obviously renovated, and probably very expensive, apartments and hotels, to clearly NOT renovated, and sometimes empty, buildings. But the seawall itself is quite nice: a brick or stone surface to walk upon; limestone and iron fencing to prevent your falling off; trees and small bushes in the parkway between sidewalk and street; benches in many places; and often snack shops and actual eateries. There are sandy beaches in other places upon the island, but near here the ocean access is stone. There are "diving centres" where one can sign up to scuba dive, as well as pools overlooking the sea, and--in one spot a mile or so from here--some sand, though the bed was quite narrow.

The television offered here at the hotel is Italian (and I recall someone saying that that is the norm for Malta), and my sister Jane will be pleased to know that Columbo, speaking Italian, is one of the offerings.
Posted by Cooper Renner at 6:23 AM

i really like the photo of the bolts, you get really good results when your eye locks into these slightly abstracted details.

your pictures are really beautiful. i'm so excited for you. your trip so far sounds fascinating. i wish i could have been at the concert. enjoy yourself and keep posting those beautiful pictures.

I adore your photos, too. As well, your description of the concert. I can hear it. Deep stoney echoes, baroque flute and harpsicord bouncing off ancient walls. It is the stuff of dreams.