This afternoon I received an email from one of the writers I've published in elimae, who told me his 22-year-old son dreamed of Malta after reading my Travel Log!

I got off the bus to Valletta in Floriana this morning. Floriana lies more or less at the "land" end of the peninsula it shares with Valletta, which is at the "sea" end and guards the Grand Harbor. I got lost trying to find Triq Sant' Anna, also known as St. Anne Street, which is where the U.S. Embassy is. I realized last Friday that I hadn't checked in with them, and I thought it might be a good idea since I'm here for an extended period. I passed through two security checkpoints, one at the entrance at street level and the other on the third floor where the embassy is located. On the third floor I filled out a registration form letting them know where I am staying, who my emergency contacts are in the U.S., and when I will be leaving. It was a quick and easy procedure.

From the Embassy I headed toward Valletta, but before I entered the city walls, I made a couple of stops. I visited both the World War II Memorial in the center of a traffic circle/turnaround. It features commemorative messages from King George VI (I think that's the right number--he was Queen Elizabeth II's father) and Franklin Delano Roosevelt. Roosevelt's message is, interestingly, dated on the second anniversary of the attack on Pearl Harbor. I'm not sure if you'll be able to read it from the photo or not, but here goes: 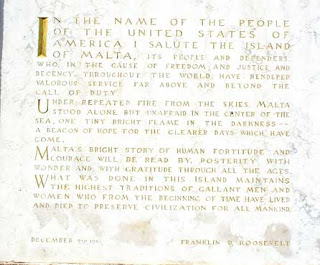 To the south of the war memorial is a garden overlooking the harbor, and along one arm of the garden is another small monument from King George proclaiming his pleasure in assuming the "Colonelcy-in-Chief" of the Royal Malta Artillery in honor of their support for the R.A.F. during the war so far. I took a photo of this proclamation especially for Ron McDougle, husband of my old teaching buddy Suzanne McDougle. Ron already knows more about Malta's military history than I will learn in six weeks here. If I thought Cary Phillips cared anything about Maltese history, I'd "give" it to him too:

I took this shot from the sidewalk looking over the wall into a parking lot below. Even with the cars evident under the tree, the brilliance of the blossoms seemed worth snapping: 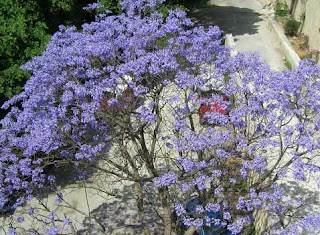 The National Museum of Fine Arts is quite an impressive place. The building itself, while lovely enough, needs some renovation and it suffers from a failing common to so many museums: lighting the paintings without creating a glare on them. Along with sculptures, some of them quite nice, and even a display of pocket watches, there are paintings here going back to the 15th century, if not further, and many are dark: I don't know if it's from smoke or soot in centuries past, or if the artists intended the darkness. I found myself wanting to get closer than I could without stepping into a glare.

But the work on display is well worth seeing, and a great deal of it features Maltese scenes, particularly the Grand Harbor at Valletta and paintings displaying some portion of the city's defensive walls which are of course still here. Much of the work is apparently by Maltese artists, artists whom I've never heard of but whose skill is not in doubt. There's even a special room for watercolors, deliberately dimly lit to preserve the watercolors from fading. This room includes the museum's single JMW Turner work. Turner himself never came to Malta, but created the watercolor based on another artist's work. This Maltese scene is small and tidy, with a lot of highlighted details on top of the background colors which seem, at least to me, almost impressionistic.

There are many portraits in the museum, including church figures and at least one of the Grand Masters of the knights, as well as other persons of no particular historical interest. The very severe-looking woman in one of them seems to want to reach out of the painting and smack somebody. Two of the works which most impressed me were Mater Dolorosa by Giuseppe Cali (whom I presume to be Maltese) and a painting of Mary Magdalene by an anonymous "early 19th century Maltese Nazarene painter" (whatever that means). The Mater Dolorosa shows Mary's head close-up, tucked into what seems to be the corner formed by the two beams of the cross. She wears a head-covering, and one tear has just fallen from her left eye. Though the rendering of her face is a little soft and hazy, rather than razor-sharp, the effect reminded me of Pre-Raphaelite work. The Mary Magdalene, on the other hand, is brightly colorful, with a beautiful blue sky behind Mary and a very thin gold halo above her head. Perhaps the traditional confusion of Mary Magdalene with the "woman caught in adultery" led the painter to depict Mary topless, though her long wavy hair and upraised hands keep the viewer from seeing anything untoward. She gazes serenely upward with that sweet Renaissance expression of bliss on her face.

There are also two paintings concerning the Cain and Abel story, which I don't recall being a prominent theme in art in general (though Romantic poets were attracted to the Cain character). One of the paintings depicts Abel sprawled on the ground while Cain, with a club raised over his head, has one foot in the center of Abel's torso, ready to strike the fatal blow. In the background one can make out the altar and a small figure, presumably Adam, next to it. It is notable, since the story deals in part with a sacrifice of grains rather than animals, that the brothers wear animal skin loincloths, in what we would probably consider the "caveman" style. The other painting is one of the museum's larger works, probably at least 6 x 8 feet, and shows Adam and Eve discovering the dead body of Abel.

The large staircase which connects the basement, ground and first floors of the museum features banisters made of chains with small maceheads at each end, a reminder of Malta's very military past (and perhaps a survival from the building's original purpose as a private home), and the courtyard at basement level has a small fountain and a large sculpture of a seated Anton Chekhov. All in all, I definitely recommend this museum and the Cathedral Museum in Mdina.

This is a shot of the longest surviving wall of the Grand Opera House. It has been destroyed twice, I read, once by fire and once (I think) by German bombers. Currently there are blue plastic seats inside it, so I reckon it's still used for some kind of open-air performance situations: 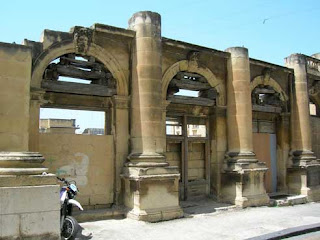 This afternoon, after my almost daily grocery stop (if I buy deli ham or turkey, I have to eat it right then, since I don't have refrigeration!), I gave in and bought only my second book of the journey so far: Ted Hughes's edition of A Choice of Coleridge's Verse, which includes Hughes's 100-page essay about Coleridge's work. I'm still reading my Spanish Arthur Conan Doyle, but I wanted some English to read as well.
Posted by Cooper Renner at 7:33 AM

How nineteenth century of you to actually register at the embassy! I wonder how many people bother to do so!

i am desperately trying to reach suzanne mcdougle - she was my senior english teacher (and one of my all-time favorites) at dhs back in 1991-1992 - do you have any contact info? tell her that david cloyd is trying to reach her.