Happy birthday, Melanie! Actually Melanie's birthday is June 11, but this post won't go up until June 10th, so maybe Melanie will see it on her birthday. Perfect!

Production note: Don't forget that on June 13 I head for Gozo. I won't know my Internet/email situation there until I get there, so if I seem to drop out of contact, bear with me. Hopefully I'll find a wifi spot quickly and easily.

I keep forgetting to tell you about Catman. He looks to be maybe 40, with longish hair and one of those kind of biggish, squarish faces that women often seem to find attractive. For some reason he looks French or maybe Belgian, but I don't have the slightest idea where he's from. I've seen him maybe half a dozen times on the streets of Sliema, most often right down from the grocery store (probably because there are lots of pedestrians there), and he's always asking for "Money for the cats!" Does he work for an animal organization? I don't know. Is he a beggar who thinks that people will more likely give for cats than for him? I don't know. One day this week I heard him saying something to one passerby about going to heaven or hell, presumably based upon one's generosity toward "the cats".

I took a longish walk this morning, going toward St. Julian's, and then up a road I haven't walked up before, thinking I'd: 1) walk; 2) see some different sites; and 3) maybe visit the newsstand in St. Julian's. Well, of course, once I headed off up the road I hadn't walked on before and made a turn somewhere, I ended up getting lost, though I didn't know I was lost until I realized I was somewhere I had been before which was not at all near where I thought I was. So I was sort of lost and not lost all at once. Then I headed up another street, and another, and followed a "St Julian's" street sign, and hazarded a guess based on the name of a very attractive apartment building, and -- there I was: in St Julian's, in a place I recognized immediately. The peninsula that St Julian's and Sliema are on must not be as wide as I thought it was. As I was walking along I was taking photographs of things I thought might interest you. Here for example are two door-pulls. Is one of them also a knocker? I don't know. I didn't try it: 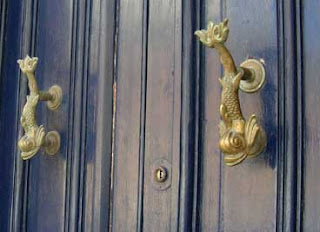 Not too much farther along this same street was another set of fish door-pulls, though they were a little more stylized and less realistic looking. A big fish is also on the Maltese lira coin, though it is the lampuki fish, which is apparently plentiful in these waters, and I don't know if these door-pulls are lampuki or not.

Many of the intersections feature, on one of the four corners, a statue of a saint, and given the way Maltese often drive, a saint may come in handy. Notice the mirror below and to the right of the saint: that's so drivers can see around the corner (though I'm not sure if it affects their actions). Many drivers, on these narrow streets upon which every corner has obstructed vision, honk as they near the intersection: 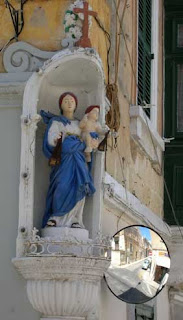 Remember that many of the houses have names. I thought you librarians and reading teachers might get a kick out of this one: 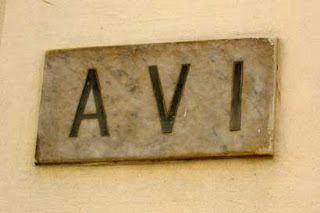 When I finally came out into a part of St. Julian's I recognized, just across the street from the harbor, I walked up along the street where there is a string of shops and so I noticed a sign I hadn't seen before, for an antique shop. It was a cool-looking building, so I walked up the hill to it, passing along the way a "Sisters of Mercy" school. This school overlooks a kind of dry creek bed, quite wide, with what looked like a small old ruined house in the bottom along with what may have been small fields for planting. On the other side of this gully is the enormous Le Meridien hotel I wrote about the other day.

The antique shop is on two floors in a building the owner told me is probably no more than 200 years old. Although Malta's history is quite old, St Julian's would have been quite a distance from Valletta and Vittoriosa and the fortified areas in the days of the knights. Just a village, the owner said. He had some beautiful old prints in the shop, as well as two simple but beautiful lace-vendors' boxes from the 19th century. They were made and used on the island, he said. He also had quite a large bookcase with glass doors in the shops which was made in Malta in the 19th century. The price tag on it was 2200 lira (something like $6700 or more), and it was marked SOLD! When you visit Malta, the shop is quite worth a visit: 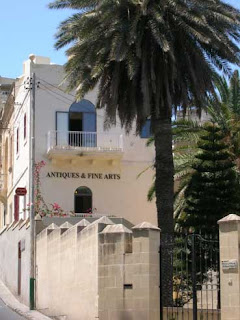 After a good bit of wandering I headed back to the hotel for lunch and a bit of reading; then down to Stella's for tea, emailing and Internetting; then over to Books Plus for my next selection (Ghost Stories of Henry James). I also went to the phone center and called a bed and breakfast/hotel in Gibraltar which I think I will go visit while I am in Spain. I will need to call them again tomorrow or the next day and firm up a reservation.

I had a late afternoon walk down through the Independence Gardens, overlooking the harbor on the north side of Sliema, right about where it changes into St Julian's, I think. These are among the nicest gardens I have seen on the island: bricked walkways, lots of benches, shade and play areas for the kids. On this walk I took some photos too.

Now, come on! You knew I couldn't resist a cute little Morris Minor station wagon. You may not be able to tell from the photo, but the work around the rear doors and the wagon windows is wood: 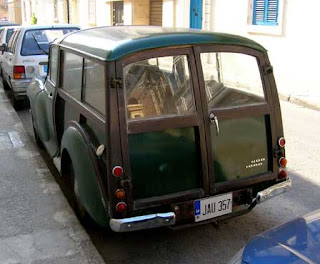 This is a poster of San Gorg Preca who was canonized last Sunday in the Vatican. The poster is quite prominent in Malta, and the Maltese are very proud to have a Maltese saint. 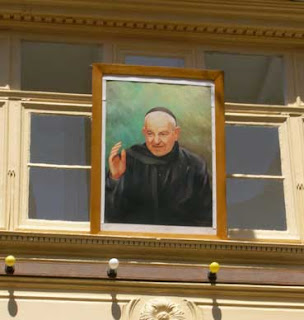 This one cracks me up. Yes, the Maltese speak Maltí, but they also speak English, and you'd think the utility company would realize that its name might make folks cringe just a little: 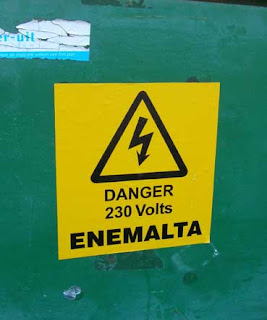 This is either a beautifully redone older building or a brand-new one. Lovely in either case: 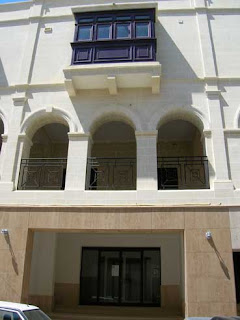 And this one kind of disturbs, though in a different way from enemalta. I saw this crane both Friday and Saturday evenings, and it gives me the willies. Those are, to all appearances, quite large--and therefore quite heavy--blocks of limestone, and I can't for the life of me see what is holding them in the crane, which is--by the way--angled out over the street! 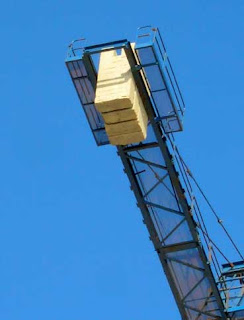 And yes, this is a gas station: just a pull-over lane on the side of the main road along the harbor. There's another on the other side of the street and a bit farther along. There are, to be sure, gas stations with their own buildings and a little bit more space. 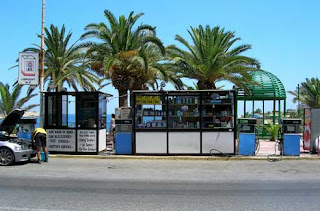 And this is St Julian's Tower. It's along the seawall promenade overlooking the sea. It was built in 1658 by order of the Grand Master of the Knights. Temptations is the kiosk on the near side of the photograph, and there is another kiosk on the far side, which you can perhaps see a bit of: that one, a coffee shop, seems to be the one that has the tables and chairs set up on the three sides of the tower from which you can see the water. I can't tell if they have actual usage of the building itself. If so, their access must be on the sea-side. It may be that the tower is simply closed up, with the cafe using the decking around it. 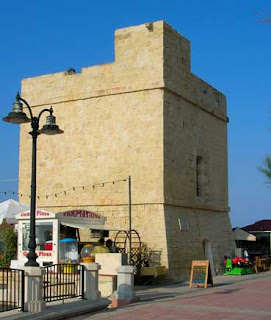 Posted by Cooper Renner at 7:58 AM