Well, as it turns out, yesterday's rain was even more momentous than I gave it credit for. Photos of flooded streets ran in both of the local papers I looked at today, along with a good bit of data which I'll hope to remember correctly.

They measure rainfall in mm (millimetres) around here. It takes 25.4 mm to make one inch. Yesterday's rainfall totals varied from place to place, to be sure, but it was in the neighborhood of 57 to 58 mm--or more than two inches. Now that kind of thing happens in Dallas with some regularity, though not nearly as often in El Paso. But in Malta? Yesterday's rainfall did more than set a record for the day: yesterday's rainfall total was more than has ever been recorded for the whole month of June altogether! One article cited two different locations, with different record totals for June: in one location, the record was around 28 mm, less than half of yesterday's total. In the other, it was 34 or so, still only about 60% of yesterday's totals. And again, both of those totals are for the entire month of June. In one location, the record books go back 140 years! So it was quite an event. Add to that the much smaller rainfalls on Saturday and Sunday, and this June already has almost 70 mm of rain: something like 85 times a normal June total. According to the newspaper, a normal June here is 0.8 mm--less than 1 mm! Or about 3/100ths of an inch. Astonishing.

Today was a much nicer day: no rain, and the clouds eventually broke apart to give us a nice sunny day. Still cooler than normal, and still quite blustery, but much better than yesterday. The waves are still crashing several feet higher than usual, so this storm, which came out of Italy, is having quite an effect on the whole general area.

I spent today in Sliema, walking around a bit, reading, doing email and the blog, generally taking it like a retired person. I spent about an hour after lunch working on another pencil sketch, but I won't make you suffer through this one. Hehehe. I had also intended to give you a photo of the outside of the hotel and of St Julian's tower, about 3/4 mile down the seawall from here, but apparently when I thought I was taking the pictures, I was not pressing down hard enough on the button and only got a light reading! Peculiar, no? But here is a photo of a building that sits off on the end of another peninsula more or less north of here (the other direction from Valletta, anyway), and gives me the feeling that I ought to be in Greece: 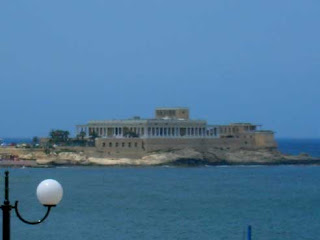 But judging by the sign, which I don't believe you can make out in this photo, it's just a casino. I'm wondering if this is the one the Australian couple visited a couple of days ago and were very unimpressed by.

Here's another photo, from yesterday's visit to the Armoury. This shows some of the engraving on another cannon: I don't know if it's the name of the maker or not. It says Rotenberger, a good German name that ought to translate out to something like Man from Red Mountain: 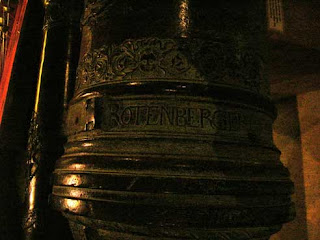 I also did a bit of Internet research today to find out about the Maltese canonization: St. Gorg Preca was canonized on Sunday, along with 3 others from other nations. Pope Benedict made a bit of his address in Maltí, which must have really pleased the Maltese people gathered in Rome for the ceremony. From what I read St. Gorg Preca is considered second only to St. Paul in his importance to Christianity in Malta. As most of you probably know, St. Paul is credited with bringing Christianity to Malta in 60 CE, after being shipwrecked here on his way to Rome. (I think my visit to St. Paul's Grotto in Rabat must be on the Travel Log for something like May 18?) I was told that Preca is buried under the floor of one of the churches in Floriana, next to Valletta.

I've got an email query out to a small hotel in Córdoba where I might stay for a few days in August, and I made my first Spanish booking today: August 5-9 in Granada, in a small hotel recommended by Lonely Planet. I need to email my travel agent and ask her about my Eurail Pass: the timetable only lists major cities, and I'm hoping that doesn't mean that I can only use the pass for those places. Most of the places I want to go are reached by smaller trains. Wish me luck!

PS: Have I remembered to tell you about the fast foods that are here (McD*n*lds, etc.) or not?
Posted by Cooper Renner at 7:15 AM

PLEASE don't tell us about the fast food! YUK! I think your eurorail pass will work for any city that has train service. When I was in Germany with my Dad we could use ours to go anywhere.

I used to lament the onslaught of fast food places, then I discovered you can get a coke with ICE and a free, usually clean bathroom in them. And I've been known to go for Burger King on my last night in London more than once.

About the Eurail pass, I'm pretty sure it's good everywhere in Europe except the UK. There may be some smaller independent lines it's not good for, but I'm sorry I don't remember.