This morning I had the pleasure of meeting the pharmacist at Stella Maris Pharmacy, a couple of blocks from the hotel. In Malta one doesn't buy vitamins, aspirin or sinus medicine at the grocery, but at the pharmacy or chemist. There are pharmacies scattered throughout the neighborhood, mostly small. Only the pharmacist herself was on duty at Stella Maris, and it may be that that is always the case. When I asked about multi-vitamins, she showed me the various types she had for sale, all arranged in glass-front cases, and gave me time to compare ingredients so I could find what was closest to what I've been taking. While I looked at labels, she served another customer who came in behind me. My accent made me an obvious foreigner, so she asked if I was on holiday. We talked a bit about my trip and about her brother, a doctor in South Carolina. She said he and his family had also lived in Texas and Nebraska before settling into SC and had been, all together, about a decade in the US. She was quite pleased that I have found much to enjoy in Malta. Next time you're in Sliema, be sure and stop by.

My previous trip to the chemist had been in search of eye drops. Then I visited a larger shop which had at least two employees, but even so, the woman who was showing me the two types of eye drops they carried took me to the pharmacist to let her look at what I had brought from the US for comparison to what I should buy here. No 45-minute waits to talk to a pharmacist!

I also spent some time this morning on the shore with my camera. Crabs mostly seem to scamper away when a human comes near, but this fellow didn't mind being photographed: 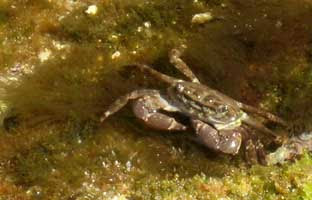 Another thing that's interesting about the shore here is how soft some of the rock is. There are a couple of outcroppings, not far from the hotel, which hardly even qualify as rock. You can scrape them up with the sole of your shoe. And yet the road and the seawall is built on top of them! This beautiful piece of rock art/graffiti gives an idea of how soft even the limestone is. Even in soft rock, this must have been a good bit of work. You can tell it once said Kristina, although it looks like someone decided to try and make it read St. Na. 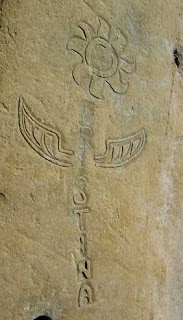 This second bit, apparently just someone's initials, looks in this photograph as though the letters are raised up, but they aren't. This too is carved into the rock: 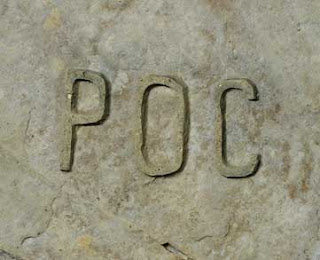 And here's a chunk of the raw rock which the waves have worn away. If you squint right, it almost looks like a photo shot out the window of an airplane flying over really rough terrain: 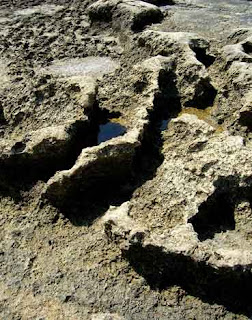 This is just a piece of broken glass, lying in the sand, but I found the color bright and rather charming. 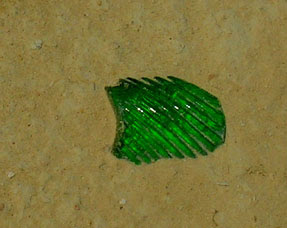 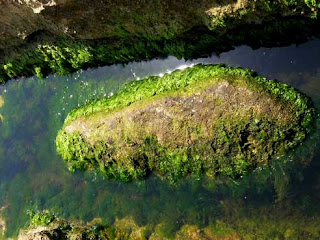 A bit later in the morning I walked up to Tigné Point again to the park to do my chin-ups and push-ups. After that, I sat for a bit and worked on two sketches, this time using a rollerball pen, as well as a pencil for shading. This one turned out better than the other, so here it is. Maybe my niece Camille will like it. 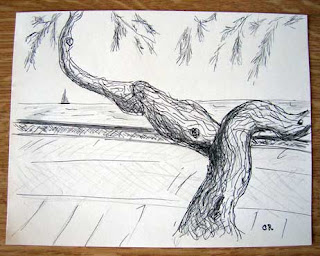 And how about some real plants? After lunch, I took a long walk around to the other side of Sliema to practice getting to the hostel where I'll spend my final night here, in a couple of weeks, before flying out for London. Coming back I roamed around through some streets I didn't know, and got lost for a while, and then finally ended up not at all far from my hotel, as I pressed on. Once or twice I saw street names I recognized, but either couldn't remember where they went to, or decided they didn't go where I wanted to go.

Anyway, about those plants: I stumbled across the Anglican Church in Sliema, a fairly small and attractively "English"-looking place. I'm trying to remember exactly how the sign was worded: I believe it said "The Anglican Diocese of Gibraltar in Europe." Even though Gibraltar is considered part of England, as far as I know, I guess they use the "Anglican" name since it's not exactly English soil, per se. After going inside the church to look around, I wandered around the outside to the back and--are you ready for those plants?--looked over the rear wall of the property and down and across into this little garden, tucked away in the middle of urban Malta. If one lived in a completely concreted and built-up area, it would be very nice to have access to this, wouldn't it? 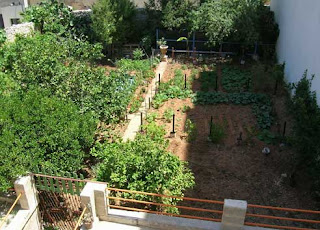 I also splurged a bit, buying my next book even though I'm still reading Ghost Stories of Henry James. I had thought I would buy either of two Agatha Christie novels: one is set in Ancient Egypt (and is called, I think, Death Comes as an End) and the other is Murder at the Vicarage, which sounds like a great place for a murder mystery. But I ended up stumbling across Appointment with Death and deciding on it, because the murder takes place in Petra, an abandoned city in Jordan which is quite a tourist attraction and which I would like to visit. I've already read the first few chapters, and I think it will be good light reading, as a counterweight to Henry James who can be very heavy going. Right now I'm reading The Turn of the Screw, a novella from the James book. It's written in an incredibly convoluted style, but is quite interesting.

Tomorrow (as I write; but maybe today when/if I post) is my "move" to Gozo. Bear with me if there is a lapse in communication! But I hope there won't be.
Posted by Cooper Renner at 1:10 AM

What are you doing with your books when you've read them? Do you know about the web site where you can register your books and then leave them behind places and track them?

Renner, I was thinking about your eating smoked trout on your cruise. I had snails on mine. I ate reindeer stew and reindeer sausage when I got to the interior of Alaska.

Is "drtee" you, Lou Ann? It just hit me that it might be! I've been wondering and wondering who drtee was who was addressing me as if he/she knew me!